Boomers assistant coach Luc Longley has unleashed on Philippines coach Chot Reyes, saying he helped incite the massive brawl in the FIBA World Cup qualifier in Bulacan and should be embarrassed for his role in the violence that erupted in the arena. 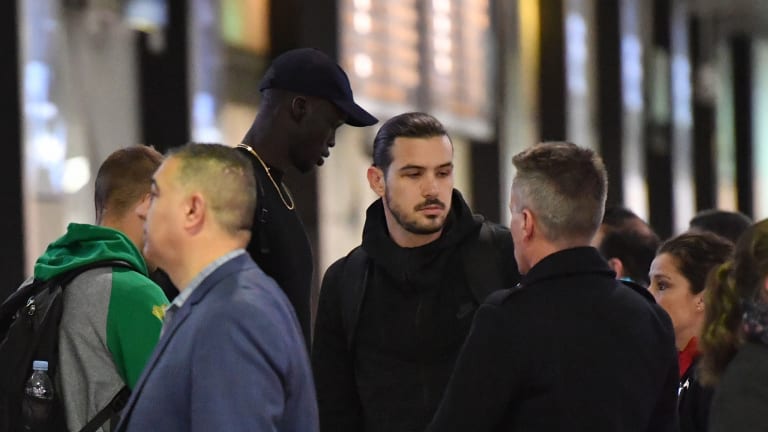 Chris Goulding and Thon Maker touch down in Melbourne.

Kickert apologised for his role in the drama, saying he would wear any sanction handed down by FIBA for the nasty elbow on Roger Pogoy that ended up being the final spark in what had been a game ready to boil over at any stage.

He threw the blow in response to a heavy foul on Goulding, who Longley would later rescue from under a pack of players and officials who were beating him and, at one point, throwing chairs.

"It's a regrettable situation. I was put in a position where I made an action that was unfortunate. I think I overstepped a little bit in my repsonse to the escalation in the game. I'm going to let FIBA do everything they need to do and come to the answers they see fit," Kickert said before being ushered off by Boomers media staff.

Longley, on the other hand, had plenty to say. The former Chicago Bull said the actions from the Filipino players and staff was the worst thing he'd ever seen on a basketball court and laid the blame square at the feet of Reyes.

Reyes urged his players in a time out to "hit somebody, put somebody on their arse," which he later said was regular basketball lingo and was aimed at getting his players to foul on fast breaks. The Boomers were well ahead in the match by that point. 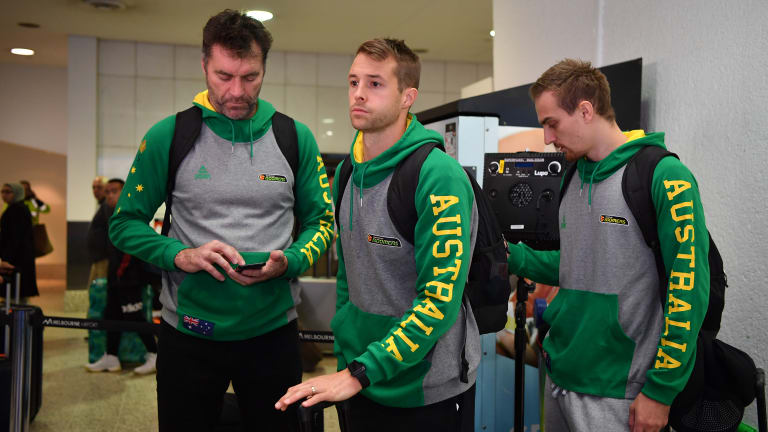 Longley was having none of it, lambasting Reyes and the Filipino players for later taking "gangster" selfies on the side of the court once the fighting had subsided and the Boomers safely escorted from the building.

"I've never seen anything like that, not even on YouTube. I do believe their coach Chot Reyes incited them to come out and thug us. There's video evidence of that. Then he substituted a thug out there, who took three or four cheap swings at 'Bubbles' (Goulding)," Longley said.

"He wouldn't look me in the eye at the end of the game when I shook his hand. I think he was embarrassed and I think that's where a lot of it came from. If you listen to his diatribe after the game I think it verifies it. I'm upset with him more than anybody.

"To let his team take gangster selfies on the baseline after something like that, that shows a total lack of control and respect.

"As a coach, he shook my hand but he wouldn't look me in the eye. I thought that was poor form. He should take some responsibility for that on the spot and I think he's embarrassed."

Goulding, who arrived in Melbourne at 5.30am, was due to front media at the airport but declined to speak at length, saying he would talk more extensively later on Wednesday.

The players who landed at Tullamarine cited lack of sleep and the emotional scars following the saga as the reasoning behind not fronting the media as planned.

Basketball Australia had originally advised Goulding would speak to the media but he was withdrawn, saying he would speak "at a better time".

“It has been an interesting 48 hours, my main priority is to get home, spend some time with my family, get a coffee and then get to bed.”

Vision from the incident showed Goulding on the floor at the bottom of the fracas, repeatedly punched and kicked.

Goulding's agent said on Tuesday he believed Longley might have saved his client’s life, after the Australian assistant coach ran to intervene while as many as 12 players and officials attacked the Boomers guard.

Longley said on Wednesday he had little choice but to make his way to the floor and protect his players. He soon noticed Goulding underneath a pile of blue jerseys before cleaning out the ruck like David Pocock and retrieving the stricken Boomer.

"Those are the sorts of images you hope you never see, one guy lying on the ground covering up his head and being kicked and beaten by the other team, players and officials and guys from the crowd.

"It was horrifying. I wasn't supposed to come off the bench. It was really disturbing.

"I went onto the court to protect our guys, with the idea of not hurting anyone, just putting my big body in the way. I went to help a a couple of other guys then I saw a big throng of blue. I couldn't even see any yellow at the bottom of it.

"Eventually I did see that and that's when I realised 'Bubbles' had been left by himself. That's not fair.

"Chris was very shaken. Chris was brave. He took a lot of hard hits and didn't swing once in retaliation. As did all the guys that stayed on the bench, which is a hard thing to do as a teammate.

"The other coaches stayed on the bench and had to hold them back. The guys were very emotional. If you get any vision of 'Delly', that will tell the story. I think our group did an amazing job in a horrible, scary circumstance. And we were genuinely scared.

"That half hour on the court was the worst thing I've ever seen in the game."

The 29-year-old Goulding arrived at the airport with teammate Thon Maker, the Milwaukee Bucks centre who was removed from the game for his role in the brawl after he jumped into groups of players with high kicks, and Basketball Australia chairman Ned Coten.

Coten spoke briefly but offered no new information citing the ongoing disciplinary process and his own roles with FIBA.

Coten said the players and staff had not slept for between 36-48 hours due to concerns over their safety and the travel home from Manila.

“Basketball Australia accepts a level of responsibility for the things that happened, as do the players,” Coten said. 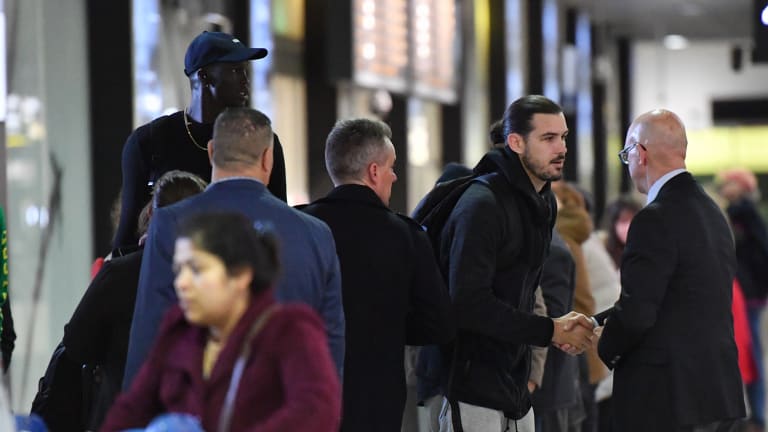 Touching down at Melbourne Airport.

“What is not acceptable is the situation where you have officials and others in the field of play which caused the scenes you saw on footage.

“When activities such as that are happening it is very difficult and won’t be tolerated by Basketball Australia.

“We are extremely supportive of our players, coaches and management – it was out of character for our players to act in the way they did but we are very proud of the way our group showed restraint during and in the aftermath of the incident.

“It was extremely difficult in the situation we are in, FIBA are undergoing a process and we are supportive of that and we accept their will be sanctions forthcoming.”

He said Goulding and other players would be happy to speak later on Wednesday.

“I think the first thing is Chris and the players all want to speak, they have nothing to shy away from. They accept they have a level of responsibility.

"As you would have seen, Chris in particular was placed in a totally unacceptable situation so I think he has dealt with that extremely well, he’s just tired, that's the situation."

There was no off-court incidents which caused the brawl, Coten said, however he did admit there was competitive tension at the game.

"It was an important game, it was the two top teams in the FIBA World Cup qualifying process in our pool so both teams were looking forward to playing."

FIBA has not said when it will announce its findings from its disciplinary process.