OAKLAND, Calif. — The Golden State Warriors run a practice drill that Coach Steve Kerr did not intend as a tribute, even if he named it after someone who taught him a great deal. He calls it the “Lute Olson drill,” and it is a blur of activity: a 3-on-2 exercise that Kerr uses to get his players up and down the court.

“It’s a good way to get a little running and rhythm and shooting,” he said.

The Warriors, who are pretty good at those things, have elevated basketball into modern art in recent seasons. But Kerr, as he helps define basketball’s present, cannot help but dip into his past. He learned that drill in 1983, when he was a freshman guard at the University of Arizona playing for Olson, who was in the early stages of building a college powerhouse. Kerr, ever the student, was already absorbing as much as he could.

Olson, 84, retired as the men’s basketball coach at Arizona in 2008, but his influence resonates. Not so much, oddly enough, at the college level, where, of late, Arizona has had its well-publicized struggles along with the rest of the Pac-12 Conference. Instead, Olson’s impact exists largely in the N.B.A. — and with the Warriors, in particular.

Bruce Fraser, one of Kerr’s longtime assistants, played for Olson in the 1980s before working under him as a graduate assistant. And Andre Iguodala, the veteran Warriors forward, played at Arizona from 2002 to 2004, when he sought to emulate an older teammate named Luke Walton.

“All the fundamentals,” Iguodala said. “Things like footwork, body positioning and just being a smart player.”

Walton, who now has the thankless task of coaching the Los Angeles Lakers, is still considered a member of the Warriors’ extended family after serving as one of Kerr’s assistants for two seasons. Before Walton joined the Warriors in 2014, Kerr did not know him well. But Olson recommended him, and that was more than enough.

“If you came out of Arizona during that era, you knew how to play the game,” Fraser said. “And that was mostly because of Lute.” 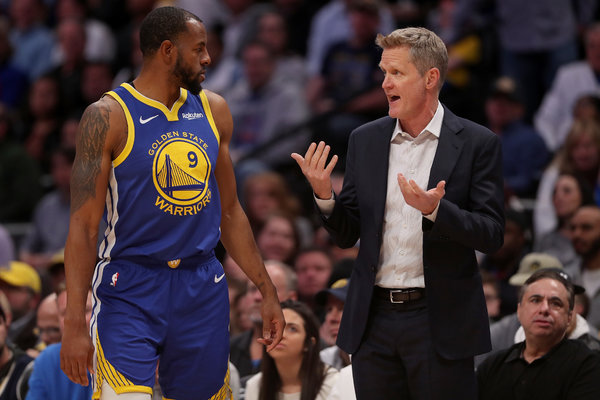 Olson, who has had health issues in recent years, emphasized basketball basics. Each practice began with a series of chest passes. Players worked on their weak hands. The Warriors, who warm up by launching half-court heaves, are slightly less regimented.

“If Coach Olson walked in and saw some of this, he’d be shaking his head,” Fraser said. “He’d think we’re so loose.”

The Warriors are still mindful of the essentials, though, especially at training camp, where they dribble around traffic cones and throw passes at pitch-back nets configured with targets. If they channel the Harlem Globetrotters, their flamboyance is rooted in bedrock principles.

“And I think you could tie a lot of that back to Coach Olson and Arizona,” Fraser said.

Kerr played for several legendary N.B.A. coaches — Phil Jackson, Gregg Popovich, Lenny Wilkens, Cotton Fitzsimmons — and he took pieces from each as he developed his own style. Jerry Marvin, his former coach at Palisades High School in Los Angeles, made a big impression, too. But these were coaches with unique approaches.

“I think the common thread is their force of personality,” Kerr said. “They all saw the game a little differently and ran different stuff, basing a lot of it on their personnel. But it’s not what made them great coaches. It was having great talent, and then developing a great culture and system so that their talent could flourish.”

Olson, for example, adapted to the strengths of his roster. He became more guard-oriented over the years, especially after he recruited high-profile players like Damon Stoudamire, Khalid Reeves and Gilbert Arenas. (Kerr noted how he had been one of the “slow guys in the backcourt” when Olson was just starting out at Arizona.)

But Olson was not necessarily trying to outwit anyone by being especially innovative. Basketball, Kerr said, is not like football, where a mastermind like Bill Belichick can lean on his tactical genius to mold the New England Patriots into the most dominant N.F.L. team of his era.

“Football is so strategic,” Kerr said. “But in basketball, there aren’t many guys I can think of historically who are the best coaches on earth who were just offensive wizards or defensive wizards. It was more about the culture they built and the way their teams played together — not a style or a system.”

It has become a hackneyed concept in sports, as if teams can just crack the code on demand, but Olson was all about culture, his former players say. Jason Terry, a retired N.B.A. guard who played at Arizona from 1995 to 1999, recalled his recruitment. He was not a shy young man, but Olson, at that point firmly established as one of the game’s top coaches, had the sort of gravitas that intimidated him.

On the second day of Terry’s official visit to Arizona, Olson and his wife, Bobbi, had him over for pancakes.

“These unbelievable pancakes,” Terry, an analyst for Turner Sports, said in a telephone interview. “That was a big part of the recruitment. But I also remember that he kind of came over and put his big paw on my shoulder, and I jumped. He was like, ‘Nothing to be scared of young fella. It’s great to have you in my home.’ And from that point on, you were just at ease.”

Olson, Terry said, was the first coach he had who never used profanity. Olson would glare. His face would go red. And those big paws would shake.

Above all, Olson imbued his players with the sense that they were a part of something larger than themselves. Before the national championship game in 1997, two prominent alumni — Kerr and Sean Elliott, both of whom had graduated to the N.B.A. — boarded the team bus. Olson had invited them to address his players, and their message was simple: Do it for all of us who have come before you but could never quite get the job done.

Terry saw that Olson had tears in his eyes. Arizona went on to win its first national title by defeating Kentucky in overtime.

“We knew that we couldn’t let him down,” Terry said.

With the Warriors, Kerr definitely swears on occasion. (Ask Draymond Green.) And the N.B.A. is not college basketball. But Kerr still tries to foster an atmosphere that is more about the collective whole than about its supremely talented parts. Kerr loathes isolation sets. He celebrates ball movement. And he stages team dinners on road trips, where family members are welcome.

As for the Pac-12, these are rough days. Arizona, under Coach Sean Miller, has been entwined in a corruption scandal, and the conference could send just one team to the N.C.A.A. tournament. Iguodala described the Pac-12 as garbage (he used a more colorful word), though he expressed hope moving forward. Kerr was more diplomatic.

In fact, the Pac-12 has not won a national championship since Kerr boarded the Arizona team bus back in 1997 and delivered his pregame pep talk. But in his own way, as the Warriors chase another title, he is still carrying the mantle for the conference and his old coach.