Adelaide’s quest to keep hold of dynamic forward Tom Lynch will intensify this week when the club meets his management.

Crows list manager Justin Reid will travel to Melbourne on Thursday, when he will meet Paul Connors and Robbie D’Orazio from Connors Sports Management to discuss Lynch’s contract.

The Crows have offered Lynch a three-year deal but the two parties are some way apart financially, with Victorian clubs keeping a close eye on the situation. 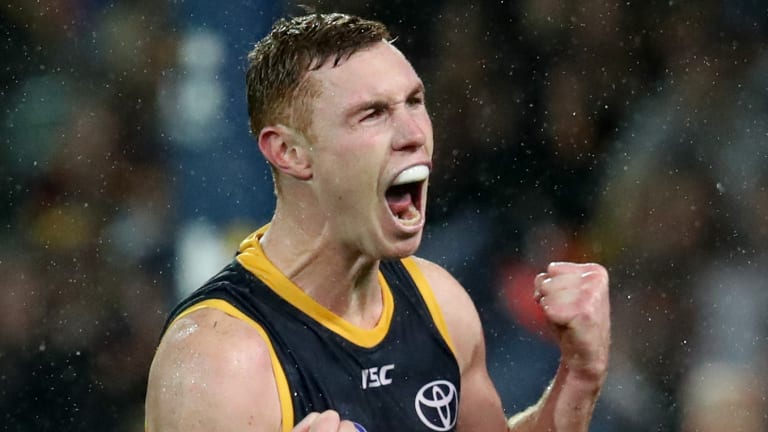 Tom Lynch and the Crows are still a long way apart in negotiations.

Lynch was in Melbourne for the day on Saturday and despite some reports, he was not meeting his management. He was looking at houses.

At 27, Lynch remains hopeful that a deal can get done with his current club and that he can finish his career at the Crows.

If, however, Adelaide don’t increase their offer, cashed-up Victorian clubs including St Kilda, Carlton, North Melbourne and even Melbourne, will begin circling.

Since 2015, when he became a regular in the Adelaide 22, Lynch is ranked fifth in the competition for score involvements.

Lynch has also captained the Crows this year when Walker and Rory Sloane were out of the team through injury.

A move to St Kilda would represent a strangely romantic return to where it all began for Lynch, who played six games for the Saints in two years before moving to Adelaide in 2012.

Despite the Saints' horrid start to the year, new footy boss Simon Lethlean is aggressively positioning the club to make plays at several free agents at the end of the year, with Lynch’s teammate Sloane and West Coast star Andrew Gaff at the top of the hit list.

The Saints know, however, that three or four players in Lynch’s price range (approximately $600,000 a season) may be better options if they miss out on the likes of Sloane and Gaff, who are both tipped to stay at their interstate clubs.

Lynch at North Melbourne would be the perfect conduit between Brad Scott’s blue-collar midfield and their blue-riband forward line, although Josh Kelly continues to be the Kangaroos' No. 1 target.

Carlton would naturally be interested in a player of Lynch’s prestige coming out of contract, particularly a forward.

Brendon Bolton’s forward line is coached by former Adelaide assistant David Teague, but Lynch is more likely to be attracted to a team closer to a premiership tilt.

Melbourne loom as the dark horse and have previously been linked to Lynch.

With the Demons beginning to look ominous under Simon Goodwin, adding Lynch to the forward line would give them even more firepower.

And while the club doesn’t have as much salary cap space as some, things may change, particularly if Jesse Hogan is eventually lured home to Western Australia or a deal can't be done with free agent Tom McDonald.