Is the highest scoring overseas-based Australian about to have his World Cup dreams dashed?

And could a mainstay of Ange Postecoglou's qualification run and the brightest Socceroos defensive talent also be heading for the scrap heap? 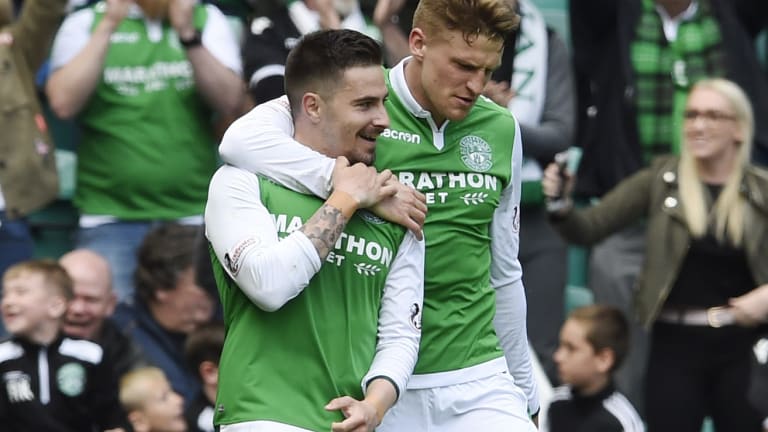 Hibernian’s Jamie Maclaren (left) celebrates one of his goals.

With Tim Cahill barely within cooee of competitive minutes – let alone goals – this season, the Socceroos are crying out for goals.

The delay in naming the 26-man group is down to a precautionary check on injuries from the weekend's action.

So long as it hasn't been announced, there's room for a last-minute change of heart.

But Maclaren believes he won't make the cut, and showed as much with a post on Twitter.

"Hat-trick on the Final day! Loved being apart of this special group of lads… time to switch off from Football and enjoy a holiday."

Wright is the captain of second-tier English club Bristol City and one of the key figures in Australia reaching the World Cup.

He played in a dozen qualifiers, including the successful play-off matches against Honduras and all three games at last year's warm-up tournament in Russia, the Confederations Cup.

His omission – likely for untested centre-back Alex Susnjar – would be a high-risk gamble.

In dropping Gersbach, Australia would be effectively locking in Aziz Behich to start at left-back – and benching one for the future.

The 21-year-old Gersbach has little experience with the national team but has impressed in his limited run-outs in a gold shirt.

There's no doubt that in cutting the 32-man squad to 26, talented players will miss out.

With Mat Ryan the first choice, either Mitch Langerak, Brad Jones or Danny Vukovic will be axed as the squad's goalkeepers are whittled down to three.

Two other outfielders will need to join Maclaren, Wright and Gersbach on the outer.