What was a free-flowing, entertaining contest through the first half degenerated into a tense, error-ridden clash as the stakes rose in the third term at the MCG on Saturday.

It was understandable, for Collingwood and Port Adelaide had much to play for in the penultimate round of the home-and-away campaign. For the Magpies, there was the chance to rubber-stamp a finals berth for the first time after five years of frustration, debate, reviews and calls for sackings. For the Power, finals were also on the line.

While the number of mistakes rose, the Magpies' will did not falter, and this proved pivotal in what ultimately was a crushing 51-point win. The Pies have stared down adversity all season, largely through a long injury list, and this determination will stand them in good stead come September. 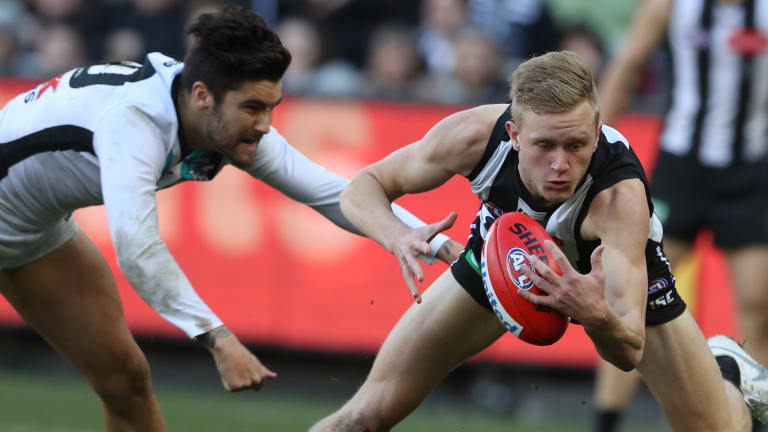 They are a legitimate premiership contender, particularly if Adam Treloar can return, and could finish in the top four should they edge Fremantle in Perth next week.

A third-term arm-wrestle became a final-term procession as the Magpies slammed on seven goals to one, the Power's only major coming with one second remaining.

Taylor Adams has endured criticism over his disposal efficiency but he was resolute against the Power. He was regularly in the thick of the action, an area the Magpies dominated their opponents. The Pies had 31 more contested possessions, with Adams, ruckman Brodie Grundy and Scott Pendlebury central to this.

Pendlebury had only three touches to quarter-time, when held by Tom Rockliff, but he worked his way into the contest and finished with 14 contested touches.

"We treated it as a mini-final … we battled all day. We put scoreboard pressure on in the final term and kept the foot on the throat," Pendlebury said. 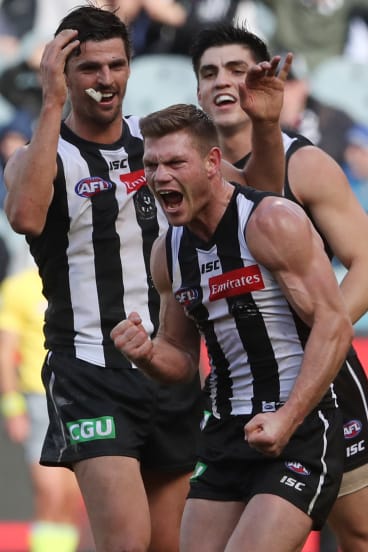 Grundy was arguably best on ground. While Paddy Ryder, nursing hip and Achilles tendon issues, took to the field, and booted three goals, Grundy dominated the hit outs and was typically industrious around the ground. He, surely, will poll strongly come Brownlow Medal night.

Steele Sidebottom was also quiet early but had important touches when the contest was at its fiercest. Jordan De Goey had been relatively sedate up forward before he was sent into the middle in the third term. Three touches in a minute helped to lift his confidence heading into a final term the Magpies dominated.

Leading by 13 points, the Pies were imperious with finals there for the taking. De Goey was busy until he spent the final eight minutes on the bench icing his right lower leg.

Nathan Murphy, once a promising cricketer, was composed across half back, having become the Magpies' seventh debutant this season, while a reborn Chris Mayne had a career-high 27 disposals on a wing. 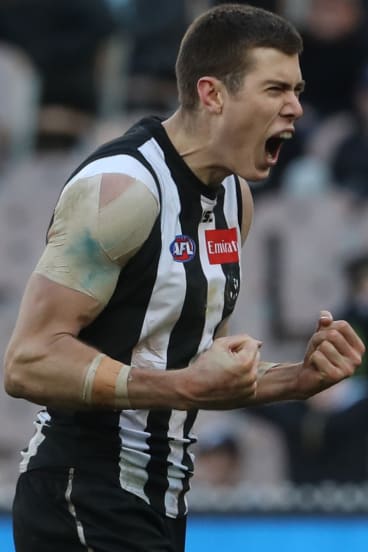 The Power were disappointing, although it should be remembered they had lost four of their past five heading into this contest. Steven Motlop, Travis Boak and Jared Polec provided run, defender Dan Houston had the better of Will Hoskin-Elliott but the Power lacked the necessary line breakers.

The Magpies' fast finish belied their slow start, when red lights were flashing in the coaches box through the game's opening 15 minutes. The Power had three goals on the board within the opening eight minutes, the Pies only one, while prime movers Sidebottom and Pendlebury were in the wrong postcode – the former with one touch, the latter yet to find the ball.

The Power dominated inside 50s 7-1 and uncontested marks 13-3 but slowly the wheel turned, and the Pies' hard work meant they had a quarter-time lead after Tom Phillips, Brayden Sier – coming after crashing tackle on Riley Bonner – and Brody Mihocek, taking advantage of a free kick to Mason Cox, hit the scoreboard.

This momentum continued early in the second term. Travis Varcoe, who caused trouble all day in his 200th match, snapped successfully, while Jaidyn Stephenson quickly followed up when Polec fumbled a mark while running back with the flight of the ball. When Sidebottom contributed to Mihocek's second major, the Pies had a 20-point lead. Could the Power respond?

Polec, considering a multi-million dollar offer to join North Melbourne, rebounded with a clever goal of his own, while Boak made the most of being awarded a controversial mark about 20m out. It became something of an arm-wrestle from that point, with Adams leading the way for the Pies with 16 touches for the term. The home side enjoyed a 15-8 advantage in inside 50s for the term, and should have led by more than three goals at the main break.