James Maloney will be free to play in the New Zealand Test after avoiding being charged for a cannonball tackle on former Cronulla teammate Matt Prior.

Any possible suspension could cruelled Maloney's international aspirations, especially after Penrith were knocked out of the finals race. 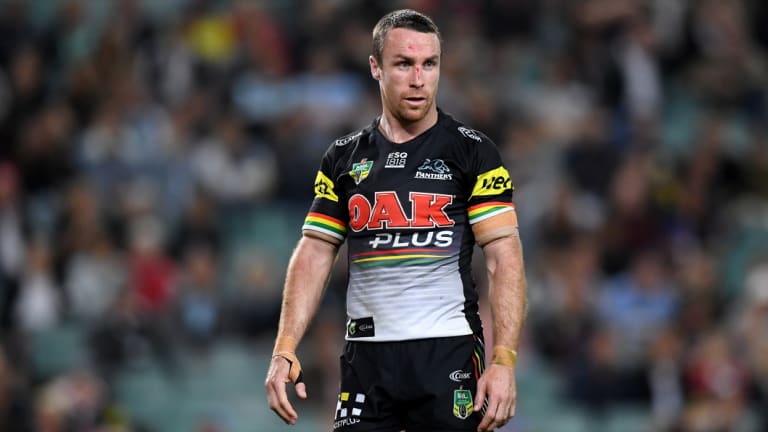 Forlorn: James Maloney after the Panthers were eliminated from the NRL finals.

Maloney said he never feared he was in trouble for the Prior tackle – and hopes he has nothing to fear with getting a start in Mal Meninga's Kangaroos.

Australia play the Kiwis and then Tonga next month in Auckland.

"It would be nice to be involved, and I've been involved the past two years," said Maloney, who was named in Meninga's Origin Merit team along side five-eighth Cameron Munster.

"A few of the guys won't be there with Cooper and 'JT'. I'll have to see what Mal does. I'd love to get the jersey."

Daly Cherry-Evans is one player who finished the regular season in a flurry and could challenge Maloney for the No. 7 jersey along side Munster.

Maloney did not have one of his better games against Cronulla who made a point of getting under his skin.

Usually a larrikin, Maloney was almost reduced to tears as he addressed the Panthers players in the sheds after the game, and farewelled trio Tyrone Peachey, Corey Harawira-Naera and Christian Crichton.

"It sucks losing," Maloney said. "It's disappointing it all came to an end. We felt we had more to give.

"I don't know who will win. I don't really care. Teams who have the week off always have an advantage."