James Maloney says he will miss just two weeks through injury with the resilient playmaker eyeing a return for Penrith's all-important round-25 clash against Melbourne, which could determine their top-four finish.

A day after fears were expressed that Maloney would be sidelined with a medial ligament strain until at least the finals – and possibly as long as six weeks – the Penrith five-eighth told Fairfax Media he had already spoken with caretaker coach Cameron Ciraldo about being rested. 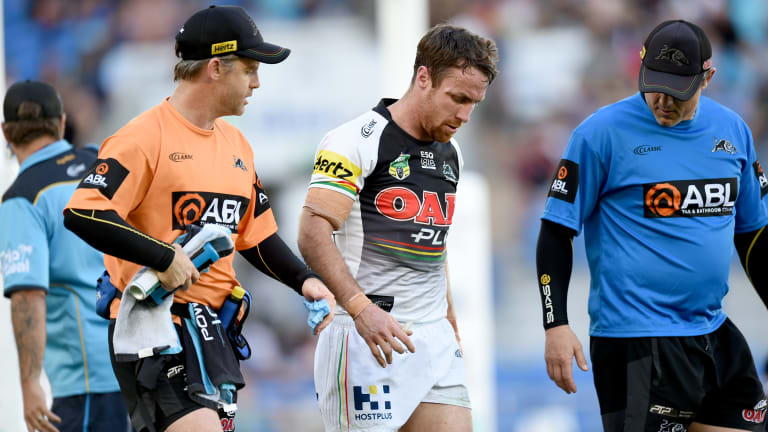 ‘I fell awkwardly, they checked the knee and if felt stable’: James Maloney.

"Three to six weeks? They told me two," Maloney said on Tuesday.

"I'll miss the two next two games and be back for Melbourne. The body will love the break.

"I'll have a break for six days and then get back to rehab running.

"I was going to miss a game regardless. I went to see 'Ciro' on Monday morning about having a rest.

"This was before we knew the extent of the knee [injury]. I asked him about having a week off, and he told me I was going to have one regardless, whether I wanted one or not.

"These two weeks will be a godsend. I'll be back for the Melbourne game and then go into the finals fresh, which is perfect."

Maloney was tackled right on half-time against the Gold Coast and stayed down to receive treatment. He returned in the second half for what turned out to be a third straight miracle comeback for the Panthers, with Nathan Cleary slotting an 84th-minute field goal to seal the 19-18 victory.

Tyrone May was named to partner Cleary in the halves for Saturday's home game against Newcastle, with the pair combining together in the handy run home last season.

Another playmaking option, Jarome Luai, is out for the season with an ankle injury. 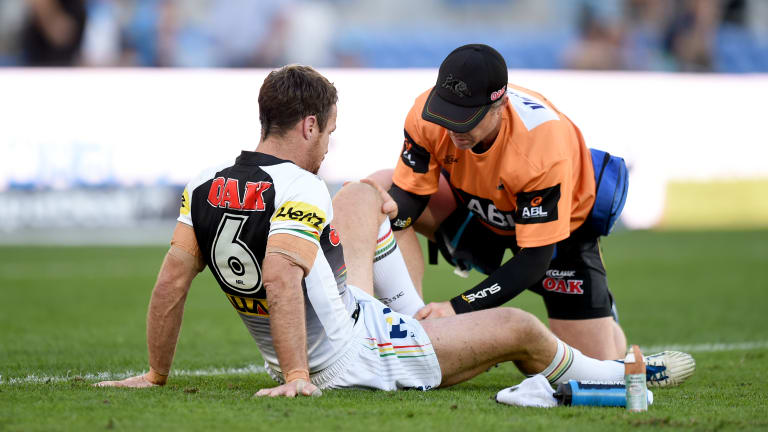 Downgraded: James Maloney is treated for the knee injury that was initially feared would sideline him for up to six weeks.

Of all the injuries Maloney has sustained, he said he had never had issues with his knees.

"I fell awkwardly, they checked the knee and if felt stable, it was just a little bit uncomfortable,'' Maloney said.

"I've never done a knee before. There was a bit of pain there. I actually couldn't pinpoint if it was the knee or the ankle.''

"We don't have enough time to go through everything I've got. There's a bit going on. But I'll be sweet.''

Maloney is regarded as one of the must durable players in the game, and the fact he returned in the second half with a medial strain was further proof.

His defence had come under scrutiny since Origin, and he said he would not be using his physical and mental state as an excuse. He vowed to address his defensive game before he returned.

As for May and Cleary, who overcame a difficult week of headlines to emerge the hero on the Gold Coast, Maloney said: "It was hard to know what kind of effect last week had on him because he's chilled and doesn't let much upset him.

"There were plenty of distractions for him. But I had no doubts he'd kick that field goal, even when he missed the conversion [during regulation time].

"Tyrone is a good [player] and he's the logical choice [for five-eighth].''

Maloney has had plenty of success at different clubs, winning premierships with the Sydney Roosters and Cronulla Sharks, on both occasions in his first season in new colours.

The fourth-placed Panthers host Newcastle, then face the Warriors away on Friday week, followed by the Storm in Melbourne.

Hard-hitting lock forward James Fisher-Harris did not train on Tuesday but is in no doubt for the Knights game.