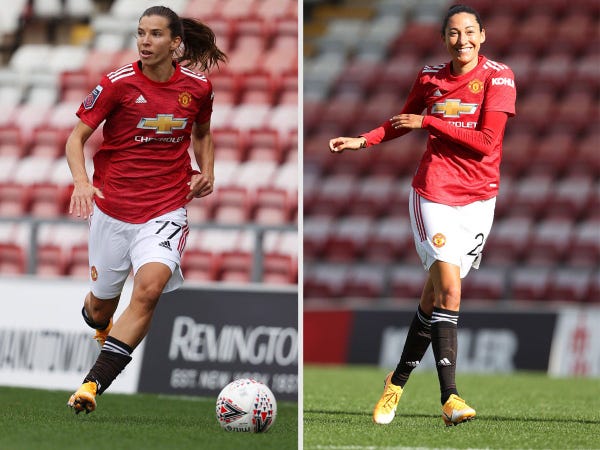 Tobin Heath and Christen Press are already making waves on the other side of the pond, and it happened before they even stepped foot on the pitch.

The US Women's National Team superstars signed with Manchester United last month in a huge acquisition for the iconic club's women's team, which is in just its second year competing in the FA Women's Super League. But before the prolific strikers could even aid in the Reds' offensive efforts, Heath and Press impressed by beating out all of their male counterparts in jersey sales.

According to the Daily Mail, the Americans' jerseys accounted for more sales than those of the club's men's superstars Paul Pogba, Bruno Fernandes, and Marcus Rashford for three days following their historic signing with Manchester United. The stunning feat underscores the weight of Heath's and Press's move to the UK and the popularity they bring to the women's side of the club.

The duo announced their decision to join the Reds after opting out of play with their National Women's Soccer League sides during this summer's Challenge Cup and the subsequent NWSL Fall Series. Neither star is wearing their signature number for Manchester United; Heath — who wears No. 17 with the USWNT and the Portland Thorns — chose No. 77 for her new kit, while Press opted to honor Kobe Bryant with No. 24 after her typical USWNT and Utah Royals FC No. 23 was already taken for the Reds.

Heath and Press both made their debuts for Manchester United during the second half of Sunday's 3-0 victory over Brighton. Heath recorded an assist on the Reds' final goal of the contest, and Press nearly netted a goal of her own when her shot ricocheted off the post moments prior.

The American internationals' incorporation into the Women's Super League follows something of a trend for USWNT stars. Sam Mewis and Rose Lavelle both signed for crosstown rival Manchester City in recent months, and superstar Alex Morgan joined Tottenham Hotspur on a one-year contract in September. With defender Emily Sonnett taking her talents to Kopparbergs/Göteborg FC in Sweden, six players on the USWNT's 23-woman roster left their NWSL sides for European clubs with less than a year to go before the start of the Tokyo Olympics.

Whether they'll return to the American league after their contracts overseas expire remains to be seen. But for now, Heath, Press, and the rest of the USWNT stars abroad will look to compete for European championships and raise the international stature of their clubs along the way.