Embattled NRL club Manly have confirmed Michael Maguire has knocked back an offer to take over from Trent Barrett as Sea Eagles coach next year.

Manly still hope to name a new mentor soon, insisting they are in talks with a "number of outstanding candidates". 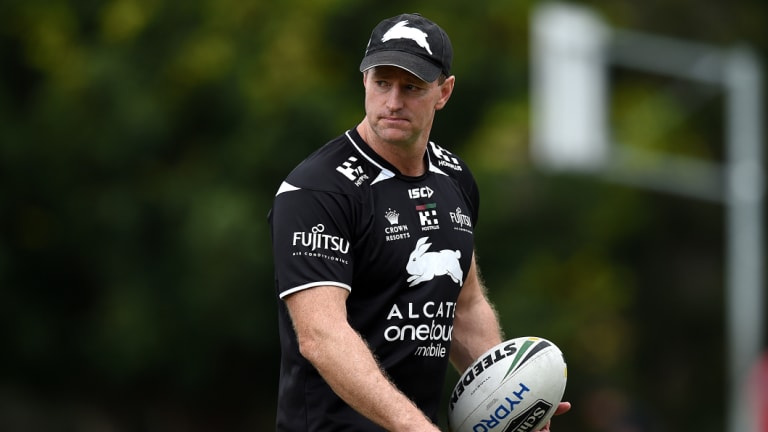 No thanks: Former Rabbitohs coach Michael Maguire has turned down the Manly job.Credit:AAP

It is believed Maguire was offered a lucrative three-year deal to take over from Barrett, who handed in his resignation mid-season and must remain at the club until July 2019 under his contract.

However, South Sydney premiership-winning coach Maguire knocked back the deal after weeks of negotiations, reportedly due to concerns over Manly's facilities, the same issue Barrett cited across the 2018 season.

"The club is in ongoing discussions with a number of outstanding candidates to ensure the highest level of professional coaching for its playing group in response to Trent Barrett's resignation," a Manly statement to members said.

"These discussions remain ongoing and as advised on Wednesday, the club expects to confirm the outcomes of them (at members night) in the near future.

"As a part of this process, it became clear yesterday that the club could not meet the proposed terms of one of these potential candidates, Michael Maguire, and negotiations came to an end.

"The club remains in discussions with several experienced and highly qualified candidates with a view to making this key appointment a priority."

Manly assistant John Cartwright is considered the favourite to take over from Barrett.

New Zealand national team coach Maguire reportedly told Manly chairman Scott Penn of his decision before leaving for Auckland to prepare for their October 13 Test against the Kangaroos.

Maguire's decision is another blow for the Sea Eagles, who finished 15th in 2018 with just seven wins after a season marred by off-field distractions as Barrett fell out with the club's administration.