Manly won't move Api Korisau into the halves for fear of ruining his NSW representative chances.

The Sea Eagles may be forced to call upon banished playmaker Jackson Hastings after five-eighth Lachlan Croker went down with a season-ending ACL injury in Friday's NRL loss to Newcastle. 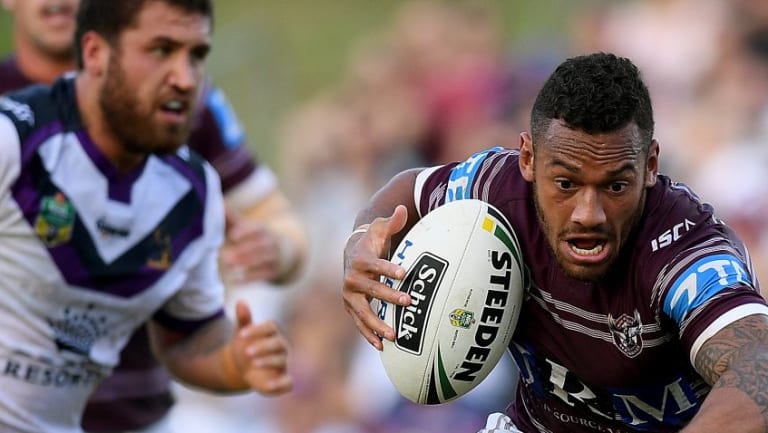 Coach Trent Barrett is running desperately low on halves options after last week telling Hastings he wouldn't be considered for first grade for the rest of the year following an altercation with skipper Daly Cherry-Evans.

Koroisau has frequently been mentioned as a Blues No.9 contender this year along with Cameron McInnes and Damien Cook.

While Koroisau does have utility value and has played 12 NRL games at halfback or five-eighth, Barrett said he would not move him from No.9.

"I'd rather not mate, he's our best hooker," Barrett said when asked if Koroisau was an option to move into the No.6.

"He's putting himself in contention to play for NSW.

"We'll do whatever's best for the side, Api will play wherever we want him to play.

Outside of Hastings, it remains to be seen what options Barrett has at his disposal.

Dylan Walker partnered Cherry-Evans in his first year at Manly but that experiment was considered a failure.

After Croker and Jack Gosiewski (suspected broken hand) both went down in their 18-12 loss to the Knights, the Sea Eagles have just 21 fit men available.

It means they will likely have to name Hastings in their 21-man squad to face the Sydney Roosters next week.

But that does not necessarily mean Hastings, who will turn out for Manly feeder side Blacktown against Canterbury at Belmore Sportsground on Saturday, will earn a first-grade recall.

Barrett could yet elevate development players to their main squad.

"We'll consider that on Monday, I'm not going to sit here and make comments on that," Barrett said of Hastings' potential recall.

"I want to keep the headlines away from that, if I could and focus on the effort those players threw up.

"We are in a position, even more so now. Jack Gosieski might have broken his hand.

After Croker suffered the third ACL injury of his career, Barrett said the 21-year-old was "shattered".

"He's had a few of them already," Barrett said.

"I thought he was probably playing his best game for the club, he looked really good, he was running the ball, we looked like we were well on our way to getting a win."