Marc Murphy should re-sign with the Blues now. Why? Because this is his moment. His beleaguered club is desperate to claw its way out of the worst era in its history. He could make a statement of solidarity. Of sacrifice.

Some would argue that Murphy could feel justified in leaving because of the mismanagement over his time at the club, and that he has the right to seek on-field success somewhere else. This is the generally accepted view too, as far as I can tell. He is obligated to stay. I’m actually excited for him to stay. 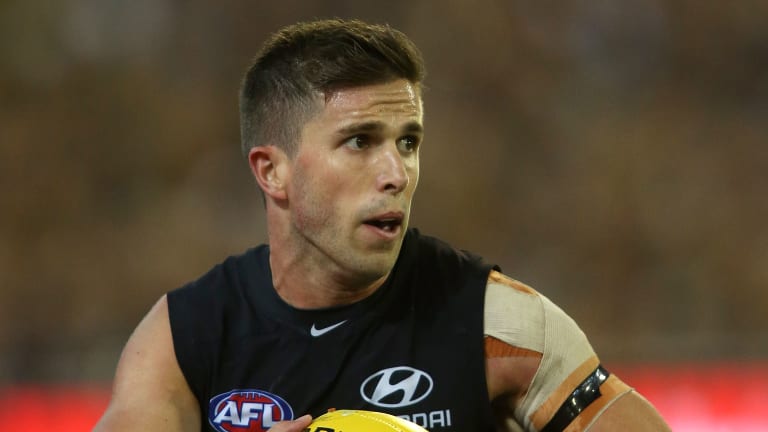 Carlton captain Marc Murphy: will he stay or go?

Murphy has been a fine player, worthy of the first pick in his draft year. He’s won two club champion awards, been an All-Australian, the AFLCA Player of the Year and played for his country against Ireland. He’s a gun. He’s also been captain of the once-mighty Carlton Football Club since 2013.

Five years should be enough time to really get a sense of what kind of leader Murphy is, even from the outside, but I’m not sure I know him in this light. A great player, yes. Prolific, yes. But beyond his statistical output, who is the man and what does he represent to the Blues?

I feel for him; it’s surely been an uncomfortable year. He’ll turn 31 next month and has missed most of the season through injury. He’s had to watch on as his side has been pummelled most weeks.

Captains aren’t slaves – they have the same rights as every player in the league. But I think morally a captain stays unless something extraordinary unfolds. Family issues, a breakdown of key relationships in the club or disrespectful remuneration are a few reasons you might consider leaving. But leaving purely for a seemingly better chance at winning a flag? I don’t think a leader has that right.

From the outside it seems Murphy has good relationships at the Carlton Football Club. He’s been paid well, you’d think, for a long time. He’s not homesick. His conundrum, as I understand it, is that the green shoots haven’t shot up as quickly as hoped and that’s left him toying with the idea of jumping ship. I wonder what effect that has on his young, impressionable teammates.

Coach Brendon Bolton and the Carlton board have to be admired for their solidarity and consistency as they navigate this most recent rebuild. But I think the limbo of Murphy is hurting the spirit of the team and maybe the club. Does he really believe in the plan?

Much of your time and energy as a leader of an AFL club is spent trying to bring people together, reminding them of the greater cause. The bigger picture.

How do you do that? How do you bring people together to fight the good fight? There are as many ways to influence things in a footy club as there are players in the league, but you get very few opportunities to make a statement that can set culture in a powerful and symbolic way.  Murphy has that opportunity before him right now.

Footballers live with the fear of finishing their career without a premiership to their name. When the fear is realised it is painful and it will stay with you forever, but that’s life. I’m not unsympathetic to his situation, but I’d love to see him play the hand that’s been dealt instead of jumping onto football’s roulette wheel.

The popular thinking is that Carlton is years away from being capable of playing finals, let alone winning a premiership. Looking at this year’s form, it’s hard to argue against that. In that light, the Carlton skipper making a commitment to his club and teammates could be viewed as one of personal sacrifice. That is powerful.

His sole purpose, on the surface of it, is to prepare this young and talented crop of players to return their club to glory. There’s dignity in that, and it would tell us so much about the Blues' former No.1 pick and what is in his football heart.

Then there is the dreaming. What if? What if the Blues' green shoots shot up? There’s talent there – who knows how quickly things can change in this new age of equalisation and free agency. And what about the nightmare? What if he leaves for a tilt at success only to find he’s backed the wrong horse? What then if Carlton catches fire without him?

These are the things that keep players awake at night. They have the potential to haunt for a long, long time. Because if we’ve learned anything over the past couple of years, it’s that it’s no easy thing picking who’s going to take home the premiership.