Marsh was a late withdrawal from Sunday's six-wicket loss in Perth, having undergone surgery to remove an abscess from his buttock.

Tasmanian batsman Ben McDermott has been drafted into the squad as cover for Marsh but the silky West Australian remains hopeful of rejoining the side.

"I am confident. I will have a bit of a run around (on Wednesday). Hopefully, I can bring my experience out there on Friday," Marsh said.

The state of flux in which Australia's batting order finds itself had helped McDermott, the 23-year-old son of former fast-bowling great Craig, earn a call-up. 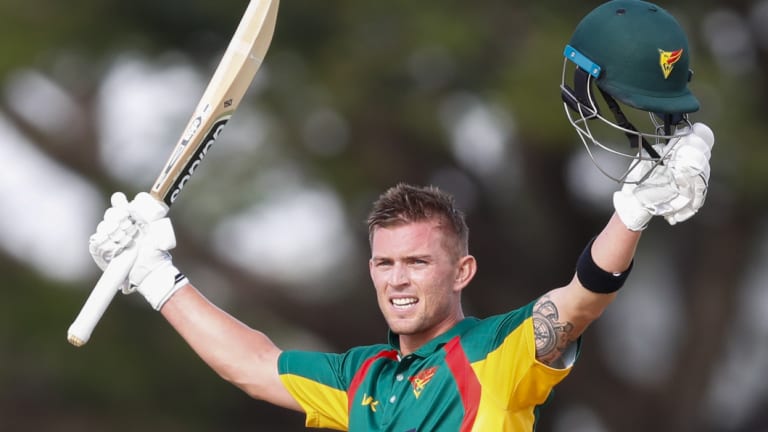 Ben McDermott has been called up as cover for Shaun Marsh.Credit:AAP

Marsh, averaging 39.7 in 58 one-day internationals with five centuries, had been slated to bat at No.3 in front of his home crowd on Sunday but his absence meant D'Arcy Short, perhaps more suited as an opener, filled the vacancy. Short was dismissed for a duck.

McDermott, a power hitter, enjoyed a call-up into Australia's Twenty20 squad for last month's series against Pakistan but failed to deliver the big innings he had craved, finishing with scores of 10 not out (against the United Arab Emirates), and 0, 3, and 21 against Pakistan.

National selector Trevor Hohns said Marsh would have as much time as possible to prove his fitness for game two against the Proteas.

"Part of the decision to include Ben is to ensure we have appropriate coverage should Shaun Marsh fail to recover in time for Friday’s second ODI," he said.

"We will continue to monitor Shaun’s progress and give him every opportunity to prove his fitness ahead of the match."

If McDermott plays against the Proteas, he could slip into the No.3 spot although the Australians have other options. He would also be the 26th player used in Australia's past 11 matches, reinforcing the tale of woe the team is mired in ahead of next year's World Cup.

McDermott is Brisbane born but has made his name in Tasmania. He enjoyed a superb one-day domestic series this summer, thumping two centuries and two half-centuries in making 427 runs at 71.16, behind only Chris Lynn for runs scored. His intentions this summer have been clear, having shed nine kilograms while enjoying a stint of county cricket in England and the Global T20 in Canada.

Where McDermott must improve is in first-class cricket, for he averages a modest 28.35 in 19 matches with only the one century. However, those close to him believe has the technique and temperament to forge a strong first-class career and be in contention for a Test call-up.

The Australians have much to think about heading into Adelaide, having lost seven-straight one-day internationals for the first time in history and 10 of 11 this year.

They have slipped to sixth in the one-day international world rankings and have shown an increasing propensity to be unable to complete their 50 overs when batting first.

Their batting troubles were shown in that they managed only 19 runs in the first powerplay in Perth – their lowest return at home when batting first – before being dismissed in 38.1 overs.

"You can talk about it as much as you like, you can have team meetings, you can look at strategies but, at the end of the day, it's up to each individual player," he said.

"When you get out into the middle, no one can help you. It's all about you, isn't it? As a player, you just have to go over how you got out or you have been getting out, your approach to your batting – there is no easy fix. But, at the end of the day, it's up to the individual."

Coach Justin Langer also needs his middle-order men to take a stand, for Glenn Maxwell and Marcus Stoinis fell to poor shots at a time when they had the opportunity to rescue their side.