Djokovic got the better of a nostalgic rematch – they hadn't played in two years because of injuries – and broke through in a tournament that Federer has won seven times, never losing a title match. 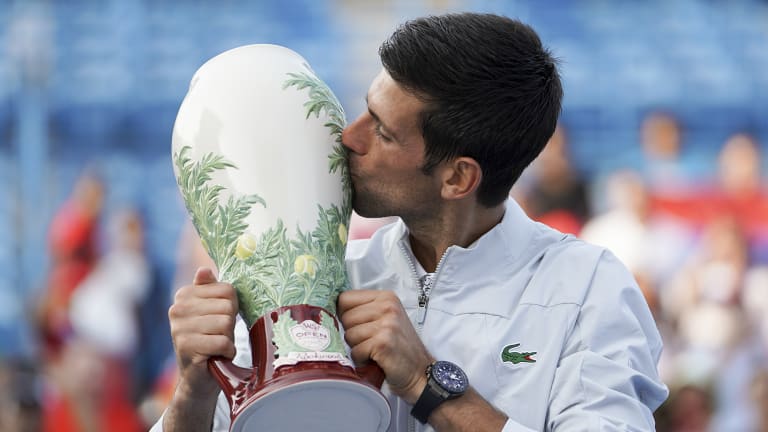 After Federer's forehand sailed wide for the deciding point, Djokovic raised both arms and roared. Then he jumped and punched the air before giving his racquet to a fan and tossing his sweatbands into the stands.

No need for mementos. That first Rookwood pottery trophy will be enough.

Djokovic is the first to claim all nine ATP Masters 1000 events since the series started in 1990. It had become his personal quest after he lost in the finals five times – three against Federer.

Djokovic leads their all-time series 24-22, doing much better in the biggest matches. He's 3-1 against Federer in grand slam finals and 12-6 overall in championship matches, including wins at Wimbledon and the US Open in 2015.

Djokovic completed a long comeback from elbow surgery by winning his fourth Wimbledon title last month, then set out to get his hard-court game in order for the US Open. He got better as the rainy week went on in Cincinnati, playing his best at the end.

Federer's serve had been untouchable all week – held for 46 consecutive games. Djokovic broke that streak to go up 4-3 in the opening set, prompting Federer to mutter angrily. Djokovic served out the set and then traded breaks with Federer early in the second set.

Federer's game was off – 28 unforced errors – and Djokovic took full advantage. He broke him again to go up 4-3 and served it out.