He might've bowed out at the quarter-final stage, but former world No.15 Wally Masur has labelled Blake Ellis as a player to watch from the Canberra International field.

Masur is in Canberra not just to watch the tennis, but also for a national conference with the high-performance department. 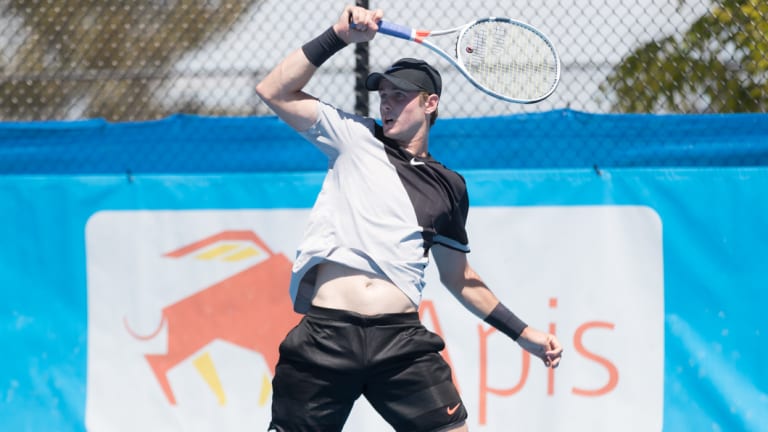 Nineteen-year-old Ellis ran into an in-form Jordan Thompson in the quarter-finals at Canberra's National Tennis Centre on Friday, going down 6-3 6-1 to the world No.87.

Thompson will now face Maxime Janvier in the semi-finals after Janvier accounted for Jacob Grills 7-6 6-4.

In the women's quarters, Astra Sharma set up a showdown with Olivia Rogowska, after her 6-4 3-6 6-0 victory over Japan's Risa Ozaki.

Rogowska was too strong for Frenchwoman Irina Ramialison, winning 6-3 6-2, while Zoe Hives will take on Isabelle Wallace in the other semi.

Masur has been impressed with Ellis, who won the Australian Open boys singles title in 2016.

"Jordan Thompson is a top 100 player … so we've got some pretty good talent here," he said.

"There's a blend of youngsters and they're trying to make a name for themselves, so there's a cross-section of talent.

"He's a good friend of Alex de Minaur and you know Alex's trajectory, he's now No.31 in the world.

"Those two were contemporaries. Blake's rise is a little bit slower, but keep an eye out for him, he's a good player."

It's not just Ellis who had impressed Masur, with the former Davis Cup captain happy with the quality of tennis as a whole.

He said while the big names of world tennis weren't in town, Canberra was hosting the next tier who were all looking to push into the top 100 so they didn't have to qualify for the four majors.

"It's a real opportunity for the players  to get some points and consolidate what's been quite a strong year for Australian tennis, both men and women," Masur said.

"Canberra, given the new venue, it's a great place to host a tournament. There's good money on offer, it's a significant event.

"A majority of the players here are aged between 19 and 24 and they're the kind of players that are desperate to push their way into the top 100 to get directly into the Australian Open.

"Or looking to consolidate in the top 200 and get into qualifying at the grand slams.

"It's a real stepping stone to the ATP and WTA tour. It's the Challenger level and the next step is the big time."

Meanwhile, Canberra star Nick Kyrgios will hand out 100 free tennis racquets, sign autographs and have a hit at the kids tennis day from 9am at the National Tennis Centre.