"Yes, 100 per cent inspired by Croatia," Gielnik told Fairfax from Kansas City in the US, where the Matildas are playing in the Tournament of Nations as defending champions. "Every time I watched a World Cup game I was just thinking of what it would be like to be there, how amazing it would feel and obviously it is everyone's dream to get there but that's a tough job too. It would be so rewarding.

"It just made me want to train to be honest. It was inspiring watching those games, it made me want to be there so bad. It gave me that realisation that the spot that you're in is to be a part of that dream in 2019 in France. It would obviously be surreal."

But Gielnik's path to being a member of the Matildas squad – currently at the tournament where Australia will play Japan and the US after beating Brazil 3-1 on Friday – hasn't been smooth. She made her national team debut in 2012 against Japan but then didn't play for the Matildas at all in 2013, 2014 or 2015.

"It was hard because I got dropped then the coach changed and that squad continued on with the new coach. It was up and down, a lot of people were in and out," Gielnik said. 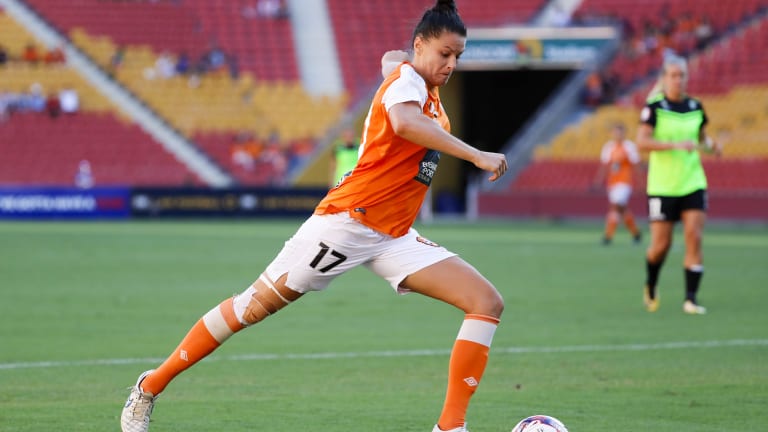 Emily Gielnik plays her W-League soccer for the Brisbane Roar.

"Like any player, you have your ups and downs and I have had a bit of a rollercoaster with football but I feel like I finally have my feet on the ground and I'm going in a good direction.

"I've never been to a World Cup so I am pretty keen to be on that flight next year."

Gielnik returned to the Matildas' line-up in the 2016 Olympic qualifiers, where she scored against Vietnam. She then missed selection for the Olympics, but was at the 2017 Algarve Cup where she scored three goals, including a double against the Netherlands.

Injury got her again just before the 2018 Algarve Cup, which then affected her availability at the 2018 Asian Cup, but that was a blessing in disguise.

"It could have been a lot worse for me," she said. "In the lead up to the Algarve Cup, I had an issue in my foot. I almost had a stress fracture so I was lucky I didn't keep going on it. If I went to Portugal then I would been done for at least six months.

"So they popped me straight in the moonboot and I found out the day we were meant to fly out. It was devastating but it was a blessing in disguise."

The Matildas' attacking stocks are strong. Sam Kerr, Caitlin Foord, Michelle Heyman, Hayley Raso and others need no introduction. But with Foord and Heyman injured (Foord will play limited game time at this tournament), Gielnik has a chance to impress.

"She [Gielnik] is very powerful, but has great technique too," Matildas coach Alen Stajcic told The Age. "Her crossing and shooting technique is immaculate. She's one of those people who can really score those goals that not many others can and play off the cuff a little bit. She is just a good finisher, can be erratic, but when she hits a ball it stays hit. Her delivery off crosses is probably the best in the team." 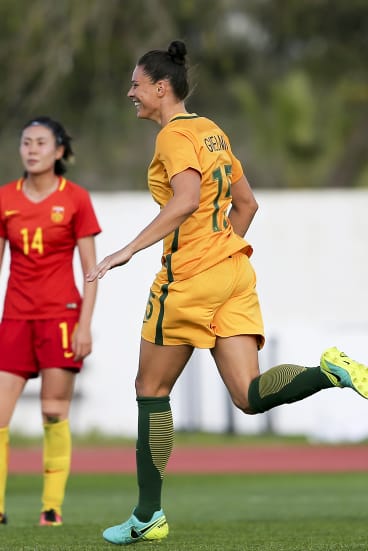 Emily Gielnik stands to make an impact at the Tournament of Nations.

Good finishing is important. Poor finishing plagued the Matildas and was the reason they lost the 2018 Asian Cup final to Japan, a match they dominated. Stajcic said it was a problem with technique, not temperament.

"We dominated possession, chances created, clear-cut chances, shots on goal [at the Asian Cup] … but you've got to capitalise," Stajcic said. "So for me we are not throwing the baby out with the bathwater – but improving our quality in the front third is an aspect we always talk about … even just two or three players who have worked on technique to improve finishing, I have been really surprised how much they have improved – I won't say who – but that's been really good.

"Crossing, finishing, delivery, timing of crosses, quality of crosses – that's the main one I have seen improve over the last three, four months."

Stajcic said upcoming games against the US (Monday) and Japan (Friday) and the win over Brazil would give the Matildas a good chance to play against teams that won't sit back and defend, like most Asian Cup opponents did.

"[It's about] tweaking and refining and always evolving and finding things we can do better and certainly over the last five, six months at Algarve Cup and Asian Cup we found teams with a different approach to us," he said.

"That probably won't happen here because we are playing against higher calibre teams. But certainly a lot of the teams have a defensive mindset against us and a lot more counter-attacking type approach to playing against us, which means we also have to think about how we approach matches and we protect ourselves from counter-attacks. But also how we refine our skills in finding penetration in the front third."