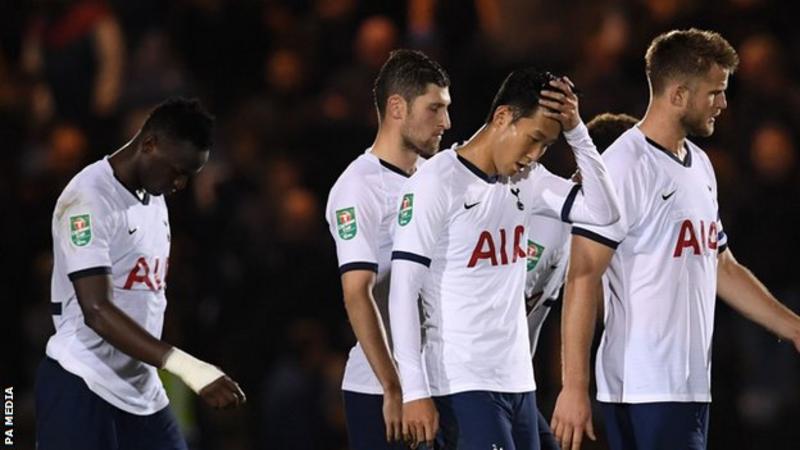 Tottenham manager Mauricio Pochettino said he needs time to overcome the “different agendas in the squad” after his side’s difficult start to the season continued with a Carabao Cup exit at League Two Colchester United.

Spurs lost 4-3 on penalties after a goalless draw in the third-round tie.

Pochettino has spoken of his squad being “unsettled” this season.

“We need time again to build that togetherness that you need when you are competing at this level,” he said.

Tottenham reached the Champions League final in June but the success of that run came amid a sequence of four wins in 17 games in all competitions.

They are 10 points adrift of Premier League leaders Liverpool after six matches this season and have won none of their five away fixtures, conceding twice in four of those games.

Uncertainty around the futures of influential players, including forward Christian Eriksen and defenders Jan Vertonghen, Danny Rose and Toby Alderweireld left Pochettino eager for the 2 September European transfer window deadline to pass so he had certainty about his squad.

But with none of those players leaving – plus Eric Dier falling out of favour – Pochettino said a group that has been largely stable during his five years at Spurs now needs a period of certainty.

“When you have an unsettled squad always it’s difficult and you lose time, then you need time to recover the time you lose,” added the Argentine.

“That’s where we are. Maybe our performances are good but you need this extra, which is mental, connection. It’s energy to be all together, not to have different agendas in the squad.

“We are in a period where it’s a bit tough for us, but we keep working to find a solution.

“When this type of thing happens it’s about staying clear and fresh and calm. We’re trying to find solutions and we only need time.”

Tottenham’s defeat at Colchester – who are 10th in League Two, 70 places below them – means Pochettino has lost one route to a first trophy of his managerial career.

But there was also plenty of experience, with Dier making his first appearance of the season, Dele Alli returning from injury and Victor Wanyama, Lucas Moura and Davinson Sanchez in the starting XI.

By full-time, Spurs had Eriksen, Son Heung-min, Erik Lamela, Moura and Alli on the pitch as they chased a place in the last 16.

But they managed only four shots on target in the game and Colchester looked just as likely to snatch victory as the match headed towards penalties.

Eriksen and Moura missed from the spot as Colchester won the shootout 4-3.

“We did nearly everything good until the last third,” said Pochettino. “Sometimes you score, sometimes you don’t.

“We feel disappointed because we dominated the 90 minutes, but we were not aggressive in the last third in the way you expect.

“It’s about doing your job, and this lack of aggression in the last third made the reality.”

Jason Wakeling: Poch has taken this squad as far as he can. Overachieved for too long and other clubs fading has helped elevate Spurs to a loftier position than their performances deserve. Only 34 points since the start of 2019. #pochout

Dax Fullbrook: Been a fan of Poch over the years but something isn’t right. He doesn’t seem to care any more. The squad act self-entitled – the ones that want to be there at least. They’ve lost faith in a system that was stunted by [chairman] Daniel Levy. Spurs are in need of a big change.

Brian Sands: Big question now for Pochettino – does he hang around with gutless players who do not have the wherewithal to win any trophy or does he voluntarily walk away before Levy sharpens his axe?

Timothy Poole: A blessing in disguise for Spurs?

Robert Weaver: This is what happens when you rock up with 10 changes & expect a lower league team to simply roll over. Embarrassing doesn’t begin to cover it. Congrats to Colchester, but the house that Poch built is tumbling down around his ears. What an utter shambles!

James Williams: Am I the only Spurs fan not actually too bothered? It will save us tricky away games which should boost us in the league. People saying it’s a shambles are out of their minds.

Aleksandar Todorov: Carabao Cup is realistically Tottenham’s best chance when it comes to silverware. They shouldn’t be beaten by Colchester with the team they have. In the words of Eric Dier, that was embarrassing. Pochettino with a lot to think about.