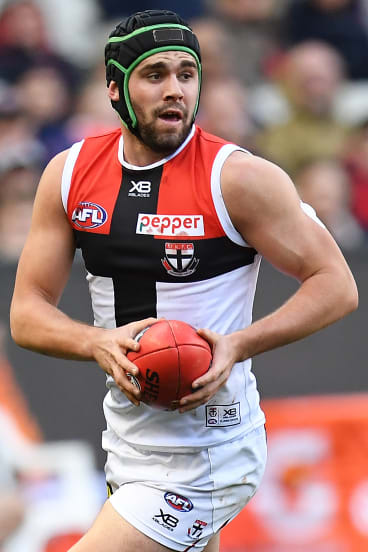 Paddy McCartin feared this time last year that his AFL career might be over.

The St Kilda No. 1 draft pick has opened up about his concussion dramas, saying 12 months later his situation is completely different.

Last season, McCartin only played five games, and none after round 12.

The second half of the season was a write-off after he suffered his seventh concussion in four years.

"It was a pretty tough time – I didn't even really know if I was going to be playing again," McCartin said.

"There was a lot of water to go under the bridge before I even put the boots on again.

"From where I am now to this time last year, it's a pretty stark difference.

"To say I'm enjoying my footy would be an understatement, I'm absolutely loving it."

McCartin said the major issue was medical concerns about his succession of concussions.

"It was more doctors, there was a bit of stuff I had to do," he said.

"Early on, it was looking a bit bleak. I've been through a lot of stuff and got it all ticked off."

McCartin missed two games after a head knock in round seven, but he said that was more precautionary.

He even is comfortable wearing a helmet in games, something McCartin admits he was not keen on doing.

"Richo [coach Alan Richardson] gave me the ultimatum – wear it or you probably won't play," he said.

"I've chucked it on and I've actually really enjoyed it."

McCartin added that the plight of teammates such as Dylan Roberton, who is battling a heart condition, had helped give him perspective.

"He's put in a lot of work over the last three months – he came into the side four or five weeks ago and he's been absolutely fantastic," McCartin said of Battle.

McCartin said the Saints kept focus during their 13-game losing streak and the two recent wins, including last Sunday's stunning upset over Melbourne, had been reward for a lot of hard work.

"The last couple of weeks, the results have reflected that everyone in the group is playing their role quite well," he said.

"The group has a lot of confidence out of that and hopefully in the next eight weeks … we can take a few scalps."