Toronto Wolfpack skipper Josh McCrone choked back tears after a 4-2 loss to the London Broncos in the Million Pound Game, with a series of disallowed tries denying the club an historic berth in England's Super League.

The fledgling Canadian rugby league side was subject to a series of controversial refereeing decisions with McCrone, Wolfpack deputy Ashton Sims and fellow Australian Blake Wallace all crossing the line only to have their tries overturned. 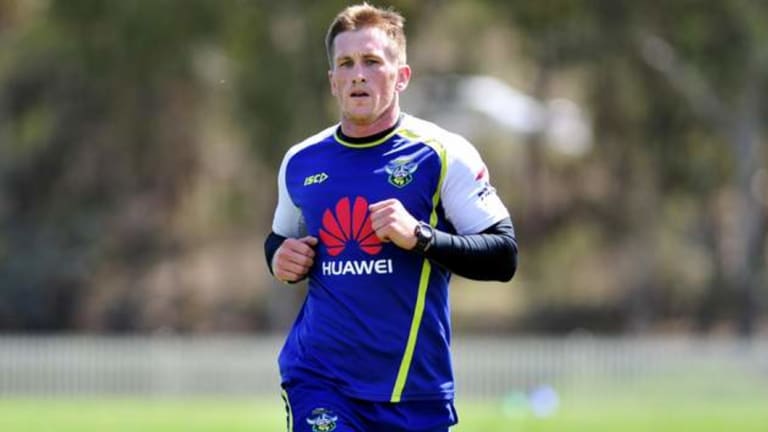 Gutted: File photo of Josh McCrone, who fell just short of his goal of leading Toronto into the Super League.Credit:Melissa Adams

The Broncos sealed the fourth and final promotion spot to the top-tier Super League for next season – as well as more than £1 million ($1.9 million) in funding.

They had halfback Jarrod Sammut to thank as the Australian converted both penalty goals.

"It's a tough pill to swallow; I've Invested a lot of time and moved my family to the other side of the world for a dream, but the dream has to wait another year now," an emotional McCrone said.

"I have to be careful what I say … but full credit to London."

Former St George Illawarra Dragons playmaker McCrone was denied a try in the first minute of the game, which set the tone for a scrappy contest in front of a near-capacity crowd of 9,266 at Toronto's suburban Lamport Stadium.

After the Broncos took a 2-0 half-time lead courtesy of an early penalty conversion from Sammut, former North Queensland enforcer Sims was denied a try in the second half.

When Toronto evened the score with a penalty in the 56th minute, the visitors responded in kind only a minute later with Sammut's conversion to regain a two-point buffer.

Toronto were again left heartbroken when halfback Wallace crossed in the 71st minute, only for a video review to rule he was held up.

"It is incredibly frustrating; we crossed the line four times and they didn't cross once but we still came up short on the scoreboard," McCrone said.

"We've put a lot of time and effort into a whole season of football and it's really, really disappointing to end on a note like that."

But McCrone promised the Wolfpack, who only formed in 2016, would rebound next year.

"It's the only thing you can do; we're not going to sit on our hands and sulk over this and there's another opportunity to come up," he said.

A Super League berth will become even tougher next season with the amount of teams promoted being reduced from four to one.