Conor McGregor has made a huge statement in his return to the UFC on Sunday with a devastating TKO defeat of Donald “Cowboy” Cerrone in the main event at UFC 246 in Las Vegas.

It had been 15 long months since McGregor appeared in an octagon, with his last fight – against Khabib Nurmagomedov – ending in defeat and chaos. 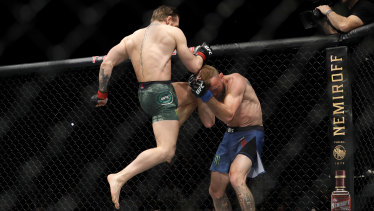 Ducking for cover: Donald Cerrone on the defensive as Conor McGregor launches into an attack.Credit:Getty Images

Shortly thereafter, the two combatants locked up in a clinch, and that’s when McGregor took Cerrone by surprise once again.

The former middleweight and featherweight champion proceeded to shoulder strike Cerrone four times in quick succession and appeared to break his nose in the process.

With Cerrone stunned like a mullet and already bleeding from his face, McGregor clinically went in for the kill, executing a high kick to the jaw followed by a knee which rocked Cerrone badly.

McGregor then proceeded to rain down blow after devastating blow onto Cerrone’s head, sending him to the canvas and leaving referee Herb Dean no alternative but to end the contest inside a minute. 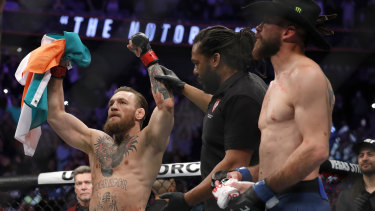 Dean gave Cerrone more than enough time to figure out his way out of the onslaught, but there was only ever going to be one result in this contest.

The man they call “The Notorious One” approached the fight with laser-guided focus and executed his game plan with precision and ease.

The amount of damage McGregor was able to inflict on Cerrone, who was also suffering from significant swelling under his left eye in the aftermath, in such a short period of time was truly breathtaking.

Make no mistake. McGregor is back.

The question now is who will be next for the Irishman who has improved his MMA record to 22-4.

The result could easily pave the way for a big-money fight between him and Jorge Masvidal, the veteran who took the MMA world by storm last year on his way to claiming the "Baddest Motherf—er" belt against Nate Diaz at UFC 244.

It’s surely something that fight fans all over the world would love to see.

Cerrone might hold the record for the most wins in UFC history (23), but he has now lost three fights in a row for the second time in 27 months, and his career record now reads 36-14 (1 NC). 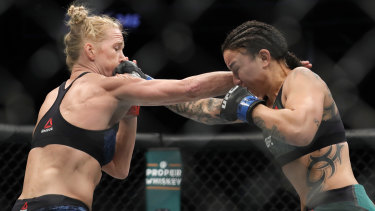 In the co-main event, former women’s bantamweight champion Holly Holm returned to form with an impressive performance against Raquel Pennington.