But the St George Illawarra coach also knows in four weeks' time, if the mail is right, he could have as many as five of his six starting forwards handed NSW Origin jerseys.

Tyson Frizell is a Blues incumbent, while Jack de Belin, Tariq Sims, Paul Vaughan and Cam McInnes all did their representative chances no harm in the Dragons' brilliant Anzac Day victory over the Roosters. 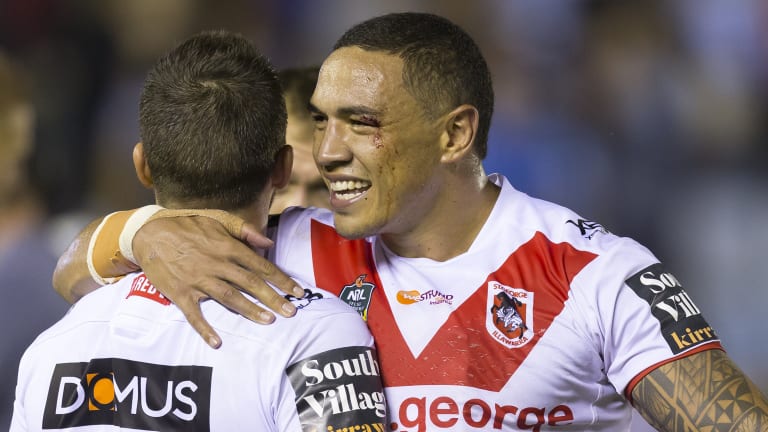 Certain starter: Tyson Frizell is a Blues incumbent and has been in great form for the Dragons.

Even Blues coach Brad Fittler admitted during Channel Nine's coverage the best way to contain Queenslander and Dragons half Ben Hunt was to "sick Tariq on to him".

McGregor told Fairfax Media all five deserved to be in the conversation and, if the team was picked next week, they have all put forward strong cases to be unleashed against Queensland.

Come round 16 and a Thursday night game against Parramatta after Origin II, McGregor could be forced to check on the physical and mental wellbeing of his five Blues hopefuls, as well as Hunt and possibly centre Euan Aitken, plus Gareth Widdop, James Graham and Jason Nightingale, who are likely to play in the Denver Test the weekend before. 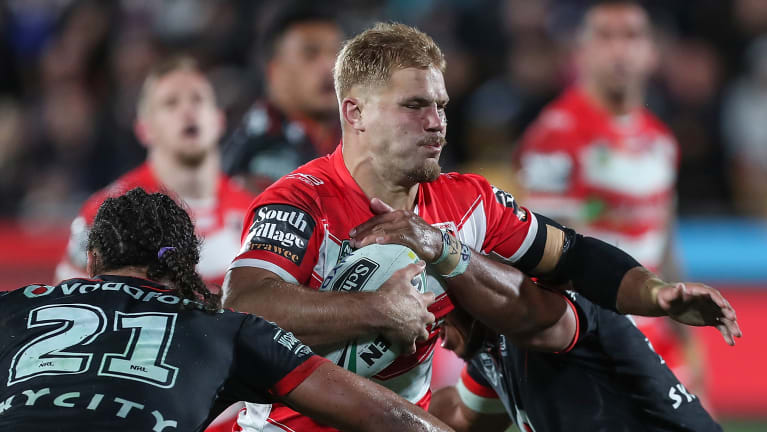 Hard man: Jack de Belin was 18th man for NSW last year, and could take the next step this season.

Frizell is an incumbent, de Belin was 18th man last year, McInnes is in the box seat to wear the No. 9, while Sims and Vaughan face stiff competition from other Blues incumbents, including Josh Jackson, Wade Graham, Jake Trbojevic, Aaron Woods and David Klemmer.

"As you know, individual players get rewarded when teams are winning, so we'll need to continue winning and for them to keep playing well to warrant selection or a change [at NSW] given they would be replacing internationals.

"If those internationals and current NSW players play well the next three or four games, and our players don't, they won't be talking about our players.

"For me, every player playing well deserves a chance to play at the higher level, and if the team was picked next week, we'd see a change in the Origin side because of where we sit on the table.

"I've said to our players, if you have a purpose and a goal, and the passion and discipline to follow it, you'll succeed at what you want and, at the moment, they're doing that well.

"But they need to keep doing it against quality players who are also tryng to get selected.

"If we do that, even though individuals have their own goals, and we keep winning, they've got a good chance.

"Five or more of them have a got a good chance, absolutely.

"At the moment it's only talk, and we still have four games before the selection.''

McGregor agreed de Belin's form had only improved on last year when he was on the fringe of Blues selection.

"They saw something in Jack's football last year [to make him 18th man], now he's got a month of footy to try and cement that spot,'' McGregor said.

"I feel he's got the balance right with playing tough and with skill. He's been able to change the game with his impact in defence and how he forces errors on players with the contact he makes.''

McGregor said Sims had made the left edge his own, and continued to improve each week, as had Vaughan, while McInnes had quickly adjusted to life as an 80-minute player.

"Cam, Tariq, Jack, all these guys we're talking about, good players do it week after week, year after year – our guys have started it, now they need to continue it,'' he said.