Kaylee McKeown executed a textbook race plan to complete an historic backstroke double in Tokyo, then invited teammate and bronze medal winner Emily Seebohm to share the top of the podium as the anthem echoed through an arena that has become a green and gold playground.

It was one of the most touching moments of the week for the Dolphins as Seebohm, the four-time Olympian who almost walked away from the sport after failing to make the national squad in 2019, stood side-by-side with a young star who has overcome the death of her father to deliver on her abundant talent in the Olympic pool.

And it was a vital medal in the context of the meet for the Australians, who have been riding a wave of success since the women’s 4x100m freestyle relay saluted on day one of finals at the Tokyo Aquatic Centre.

Heading into the final day, Australia had already secured seven gold medals, equallying the tally in Athens when the squad boasted household names like Ian Thorpe, Grant Hackett and Leisel Jones. One more gets them to the eight won at a home Games in Melbourne in 1956 and two more has them out in clear water.

It’s not out of the question. Emma McKeon is favourite for gold in the 50m freestyle and the women’s medley relay looks like an extremely tight contest. But with Olympic champions McKeown and McKeon involved, as well as freestyle sprint ace Cate Campbell, they should come mighty close.

McKeown has contributed two of those seven victories and her 200m backstroke gold always looked the better bet. As the race panned out, McKeown sat behind Canada’s 100m silver medalist Kylie Masse before drawing clear in the final 25 metres to triumph by more than a second in a time of 2:04.68. 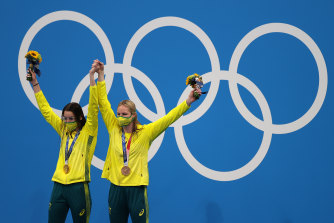 Kaylee McKeown and Emily Seebohm on the top of the podium on Saturday.Credit:Getty

The wonder of her week is not that she competed so well physically, but how well the 20-year-old was able to compartmentalise her emotions from her performances. Her back story is now well known, having lost father Sholto to brain cancer last year, and McKeown used that to fuel her in the water.

“I knew I was ready physically coming into these Games, I’ve been doing the best training I’ve ever done,” she said. “So I knew it was just going to be the mental side, I’ve been through a hell of a lot, it’s just about motivating yourself and having a bit of faith.”

There were no post-race expletives this time. Instead, she won hearts as she beckoned Seebohm onto the top of the podium. Seebohm, now 29, was McKeown’s hero as a junior swimmer. On Saturday, they stood together as the flag was raised after an Olympic final.

“For her to come to a last Olympics and get third, I thought ‘why not’, she deserves to stand on this podium with me to where she also belongs. Before we walked out out, she said ‘it would mean the world to me if I could put this medal around your neck’,” McKeown said. 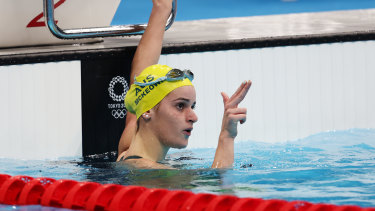 “I found that so sweet, just a real testament to who she is as a person and an athlete as well. So it was quite emotional, she had some tears in her eyes, so did I, but to have her next to me singing the national anthem was pretty special.”

Seebohm is another Cinderella story from the Tokyo team. She almost walked away from the sport in 2019, having missed a spot in the squad for the World Championships and struggling with eating disorders and body image issues.

She sought out master coach Michael Bohl, who said he would help as long as her goal was to get back to the top of the sport, not simply fall over the line to tick the box of a fourth Games. Now Seebohm has a second invidual medal in her keeping, adding to the silver she won in London in 2012.

“It’s so amazing, I never thought this was going to happen again. I just feel so lucky. God, I’m not a cryer, I’m not a cryer at all,” Seebohm told Seven on the side of the pool. “So proud, the team has done so well, it’s just been an absolute dream. I’m just so grateful for all the times I’ve been on the Australian swimming team, it’s been the highlight of my entire career.”

Never miss a medal or great sporting moment with our Olympic update emailed daily. Sign up for our Sport newsletter here.