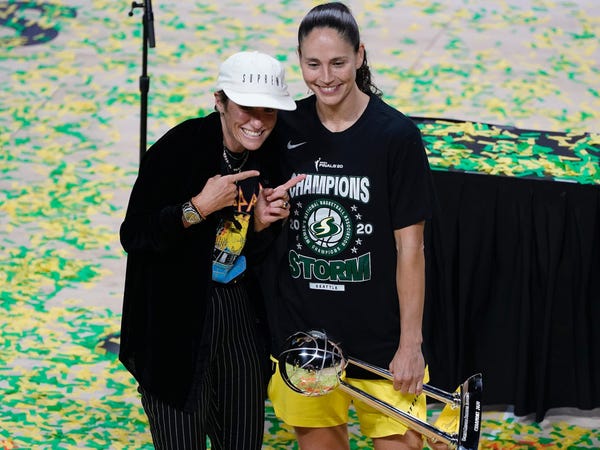 Megan Rapinoe is about as accomplished an athlete as they come; the US Women's National Team star is an Olympic gold medalist, two-time World Cup champion, and the second-ever female recipient of international soccer's highest honor, the Ballon d'Or.

But on Tuesday night, she was just like every other proud girlfriend.

Rapinoe is in a long-term relationship with WNBA superstar Sue Bird, who is — somehow — just as if not more decorated than the pink-haired footballer herself. Bird has won two NCAA championships, four Olympic gold medals, and four FIBA World Cups over the course of her illustrious basketball career. And this week, the 11-time WNBA All-Star secured her record-tying fourth WNBA title with the Seattle Storm.

And Rapinoe was on hand to celebrate.

After hoisting the WNBA championship trophy into the green and gold confetti-filled air alongside her Storm teammates, Bird carried her new hardware over to the baseline to give Rapinoe a celebratory kiss and share a tender moment together. The OL Reign winger beamed and threw her arms around her point guard girlfriend before pushing her back towards her teammates.

After contributing 7.7 points and 11 assists per contest through Seattle's three-game sweep of the Las Vegas Aces, Bird became the first player in WNBA history and just one of three stars across the WNBA and NBA to win a championship in three different decades.

It's an incredible and seldom-accomplished feat, and Bird — who turns 40 next week — recognizes it as such.

"I think I'm having this in-shock moment because it doesn't really feel real that we just won, and that I was able to contribute in the way that I did," Bird told members of the press after Tuesday night's win. "But it is 100 percent something that when it's all said and done, I will be incredibly proud of that from 2002 to 2020, I was able to win four times with the same franchise."

After Bird completed her postgame media obligations, she joined Rapinoe and the rest of the Storm roster for champagne-fueled celebrations late into the night. And the 2019 World Cup Golden Ball and Golden Boot winner took to social media to publicly honor her superstar girlfriend.

Sue ages backwards. I am so very proud of you baby ❤️. @sbird10

After 93 days in isolation, Bird, Rapinoe, and the rest of Seattle's team will leave the WNBA's bubble at IMG Academy in Bradenton, Florida, and presumably continue the celebrations back in the Emerald City.