Can they make it four titles in a row?

Melbourne City has carried all before it in the W-League for the past three seasons, and is hoping that it can continue to set the standard even with the loss of its captain coach from last season, Jess Fishlock, and Matildas defender Alanna Kennedy.

In place of that high profile pair they have recruited Matildas stars Elise Kellond-Knight and Tameka Butt, who join up with a squad which will have most of its core players still in place.

Matildas defender and City's championship winning captain Steph Catley and star forward Kyah Simon will also be in light blue for another season while Rado Vidosic, who has taken on the head coaching post, has also recruited W-League forwards Helen Caceres and Adriana Jones.

The former has played for Western Sydney Wanderers while the latter is an ex Adelaide and Newcastle striker Adriana Jones.

“We’ve secured a number of top-class new signings for the 2018-19 season, that will add to
the quality the returning players have demonstrated these past few seasons,” said Vidosic.

“We all know the quality Tameka and Elise can bring to the team following their many
successful performances for the Matildas, particularly during the 2018 AFC Women’s Asian
Cup.'' 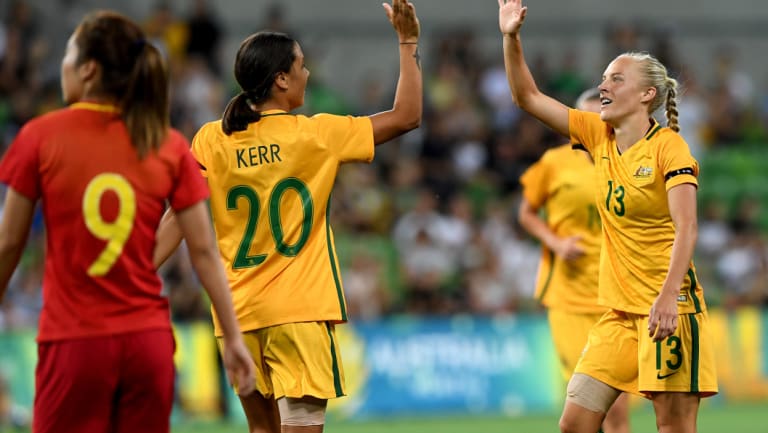 Kellond Knight most recently played in Europe for 1. FFC Turbine Potsdam before moving on
to Hammarby Fotboll in Sweden.

Butt, who won the Julie Dolan medal in the 2013-14 season has played club football all over the world, including in Germany, Sweden and USA.

Catley, who began her career with Melbourne Victory, has been with City since its inaugural W-League campaign in 2015 when it won every game it played.

Simon is another experienced Matilda and a Dolan medal winner who joined the club in 2017, while

Japanese international Yukari Kinga and NZ international and City regular Rebekah Stott are also back at Bundoora for another season.

Melissa Barbieri – who is now 38 and the mother of a five year old daughter – is also included on the roster having come out of retirement to help City out of an injury crisis last year.

“We’ve retained a large group of the successful squad from last year which provides us with
a stable platform to work from,” said Vidosic

“We’ve still got a few more players to confirm before our list is complete.''