The talk of Gosford this off-season has been whether Usain Bolt will figure in the A-League, but  Melbourne City are focused on another Mariner ahead of their round two meeting. 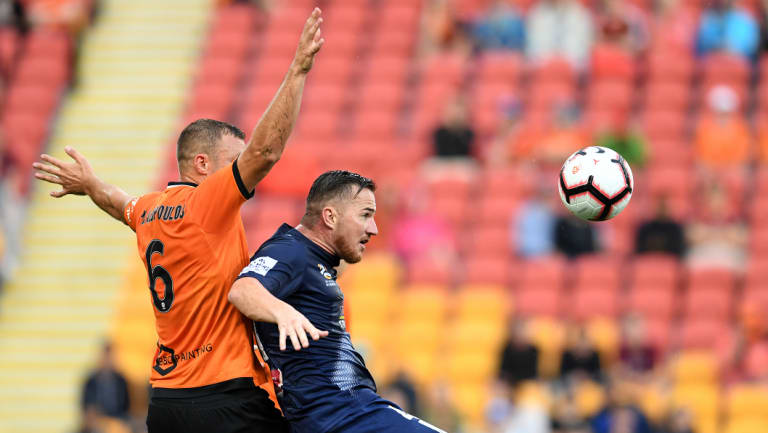 City are viewing the Mariners’ Ross McCormack (right) as the big threat.Credit:AAP

"They're talking more about Ross than anything else," he said.

"He did a great job for us last season. He was good within the group, good man, popular man within the football club, with the fans and in the dressing room.

"He's willing to come out of the comfort zone of England to progress his career so every credit to him."

McCormack scored 14 goals in 17 games for City last term on an injury replacement deal for Bruno Fornaroli and left the club when the Uruguayan proved his fitness for the run-in.

Joyce enquired about another loan for the Aston Villa striker this term, but opted against the 32-year-old when they realised they'd have to wait until the end of the transfer window, at the start of September, to sign him.

"It's not easy to get them when the windows are open because obviously players that are on a lot of dough, the clubs are looking to get a return from them," Joyce said.

"At the times that we were looking at our options in forward positions he wasn't really available.

"I'm looking forward to seeing him. I just hope he doesn't score."

As for the other Central Coast striker – Bolt – Joyce said he couldn't have an opinion on his credentials without seeing him train.

But City have seen enough from the other Mariners forwards to know they'll be a handful this season.

Eugene Galekovic, one of City's best in their first-up derby defeat of Melbourne Victory, said Central Coast's recruiting had impressed him.

"Their wingers are quite quick. [Matt] Simon gets around, he works hard and Ross knows where the goals are."

The meeting pits two of round one's luckier outfits.

City rode their luck before beating rivals Victory 2-1, while Central Coast benefited from Adam Taggart's off day to draw 1-1 at Suncorp Stadium against Brisbane Roar.

Joyce said both skipper Scott Jamieson (hamstring) and Dario Vidosic (illness) would travel to Gosford despite missing round one.