Bruno Fornaroli's absence from the Melbourne City match-day squad is barely news these days, so out of favour is the Uruguayan striker.

Of far more consequence to coach Warren Joyce as he prepares his team for what looks to be a very difficult assignment on the road in Adelaide is the potential return of Belgian defender Ritchie De Laet. 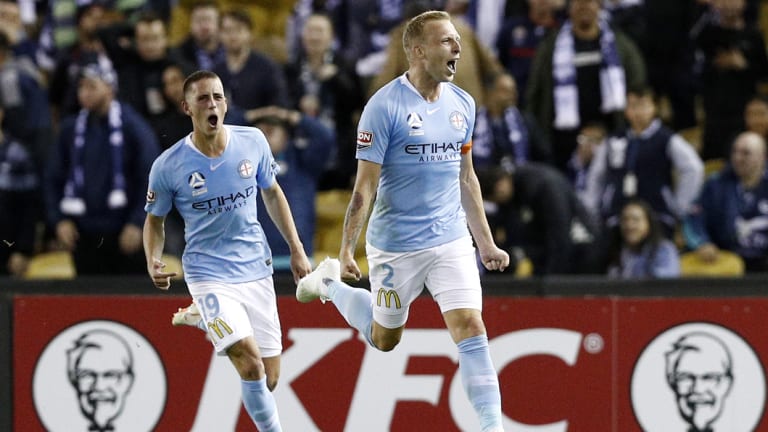 Unusually for a marquee signing, De Laet is a full-back.

But his pace, strength, and bullocking attacking runs down the flanks make him as much a threat going forward as any midfielder.

The former Manchester United, Stoke and Leicester player's leadership qualities are also important for Joyce as he looks to build a team that is tougher, mentally stronger and more robust than some previous City line-ups – even if, without Fornaroli or a recognised front man, they lack the cutting edge of previous years.

If the South American is cut loose in the new year, City will be able to look for a replacement. But with French attacking midfielder Florin Berengeur out until at least January, their in-house options are restricted to using the promising and hard-working Lachlan Wales in a central position, with Dario Vidosic and Riley McGree expected to help fill the goal void from midfield.

City were unlucky not to get something out of their away game in Perth last Saturday night.
For most of the first half they were better than the league leaders, and Joyce's set-up and organisation nullified Diego Castro, Andy Keogh and Chris Ikonomidis.

But one lapse of concentration near half-time allowed Ikonomidis to swoop, and after that City were on the back foot as they had to chase the game without a recognised attacking focal point.

So the possible return of De Laet could help shore things up at the back as well as give them some leadership on the pitch.

Another Joyce regular from last season who has been missing through this campaign is tall midfielder/defender Osama Malik. He is close to fitness, but probably not ready for the Adelaide game.

''He’s trained. We had an in-house game last week and he had some minutes and he’s obviously been out a long time," Joyce said.

"He’s a great kid and he’s desperate to train, I took him on Monday when the rest of the lads were off and you can see a little bit of sharpness is needed but he’s desperate to be a part of it and, again, we’ll just assess him."

City's efforts against Perth showed they could manufacture chances, they just didn't finish them off. That's what Joyce wants to see more of, with his midfielders taking up more forward positions.

'We’re looking to get in there and score and they are the areas we’ve looked to work on and improve and make the most of the opportunities that we create,'' he said.

It's not just the midfielders he wants to see weighing in, either.

''You want every player to, if you look at teams around the world and teams in other sports. You’ve got a lot of people who score goals or score points whatever the sport is.

''Watching the basketball this week you’ve got several people in your team that’s score lots of goals or lots of points you’ve a chance of being more successful.''