Melbourne have confirmed their star recruit Jake Lever has ruptured his ACL.

The Demons had been waiting for test results from Sunday morning before they confirmed the injury blow in the afternoon. Lever will need a knee reconstruction, which will end his season.

Lever moved to Melbourne from Adelaide in the 2017 trade period. The Demons gave the Crows two first round picks and a fourth round pick in exchange for Lever, a second round pick and a third round pick.

The intercepting defender came off injured in the first quarter of Melbourne's win over the Western Bulldogs at Etihad Stadium on Saturday.

The injury happened when Lever pushed of Marcus Bontempelli and swiftly changed direction as the pair battled for the ball. It seemed innocuous, but that is often the case with ruptured ACLs.

"It's a suspected ACL … it's really disappointing for Jake and the club," coach Simon Goodwin said after the game.

"He's someone we care about deeply, he's really fitted into our group really well. 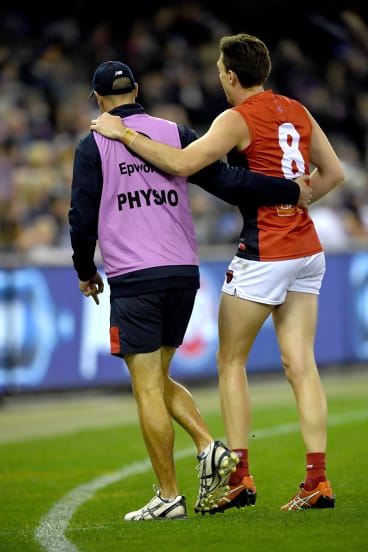 Jake Lever is assisted off the ground.

"He's a very resilient young man. I think we need to get all the information first and go through that process, but lots of guys have come back from ACLs really strongly.

He has had a knee reconstruction of his left knee before. Lever missed his final year of under-18s football after undergoing the surgery in 2013.

Fellow Demon Jake Melksham looks to have escaped serious damage to his ankle after hurting it against the Bulldogs. He is hopeful of being available for the Queen's Birthday clash in eight days.

Meanwhile Essendon remain hopeful David Zaharakis has escaped a serious shoulder injury after their loss to Richmond on Saturday night.

It is suspected he has broken his collarbone.

The Bomber, 28, was hurt when he was tackled into the ground by Tigers' ruck Toby Nankervis. Teammate Orazio Fantasia injured his ankle early in the game but played out the match.

West Coast said they would wait until Thursday to provide an injury update on Jack Darling. The Coleman Medal contender badly hurt his ankle in a marking contest in the first quarter and did not return.

Adam Simpson was unable to give an update on his condition when speaking on television on Sunday morning.

On Sunday North Melbourne forward Jarrad Waite was an extremely late withdrawal from the side to play Brisbane, injuring his calf in the warm up. He was replaced by debutant Tom Murphy.

"I did a couple of run throughs and the calf just went pretty tight," Waite told Fox Footy at half time.

In other injury news Western Bulldogs forward Tory Dickson has re-injured his hamstring. St Kilda captain Jarryn Geary sat out the last quarter of Saturday's loss to West Coast with a calf complaint and Gold Coast's Steven May didn't finish the match due to a final term rolled ankle.

His teammate Aaron Hall came off during the second quarter with a shoulder injury after tackling Joel Selwood. He did not return.

There was bad news for their former teammate Harley Bennell who experienced tightness in his calf playing in the WAFL, according to Fremantle.

He was four-games back from a calf injury suffered in February. Bennell debuted for ther Dockers in round 22, 2017, but is yet to play at AFL level this season.

Earlier in the week coach Ross Lyon said Bennell had been on a new training regime to fix his troublesome calf problems, which included ballet.