Melbourne United coach Dean Vickerman knows his side needs a mental reset and he hopes an early visit to New Zealand can provide it.

The reigning NBL champions are in the most trying part of their schedule having played four games in nine days following Sunday’s 87-80 win over Cairns Taipans at Melbourne Arena. 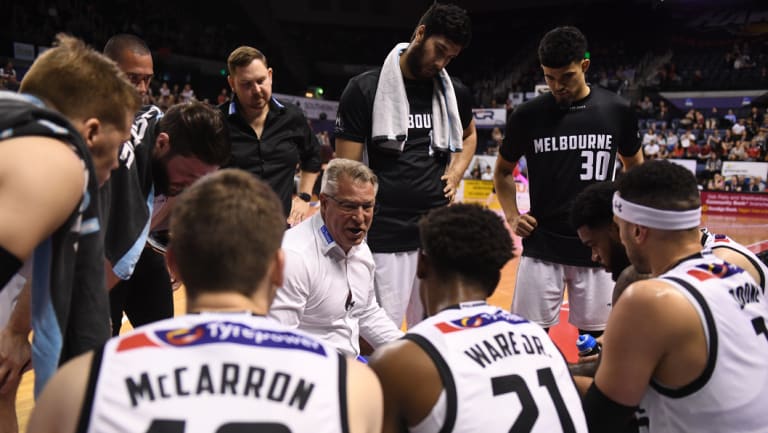 Packed schedule: Melbourne United coach Dean Vickerman is trying to give his players a balance.Credit:AAP

Melbourne were showing signs of fatigue and struggled to execute their offence, instead deferring to the creative talents of Casper Ware (34 points), Mitch McCarron (16 points) and DJ Kennedy (10 points).

They still have three more games before the FIBA international break at the end of the month starting with a clash against New Zealand Breakers at ILT Stadium Southland, Invercargill on Friday night.

Usually Melbourne would leave for Auckland (where the Breakers usually play their home games) on Thursday but the Kiwi side is looking to take their side around more of New Zealand – sothis game is in the far south.

Vickerman coached in New Zealand for a number of years and knows the country well so Melbourne will travel on Wednesday and spend a day in Queenstown, which the coach hopes can help mentally freshen up his side.

Physically Melbourne have slight question marks over guard Chris Goulding (knee) and centre Alex Pledger (illness) for the trip but both are still a chance to travel.

Goulding returned from a knee injury on Sunday, playing 25 minutes but he looked a little hobbled by the end of the game. Pledger missed the game due to illness and will have tests as this is the second time illness has hit him this season.

"We are going a day early and stopping in Queenstown to just have a day to really reset before these last three games coming up before the FIBA window," Vickerman said.

"Last year we were at this point. We had won six games by the FIBA window so for us to have three more games right now.

"We can have a real crack. Hopefully we have our whole group back if we can get Pledger as well."

While Perth Wildcats have sped out to a 7-1 start, Vickerman still sees his club in a good position provided they can continue to win games and their next three opponents all sit right behind them on the ladder in the Breakers (4-3), Brisbane Bullets (4-5) and Sydney Kings (4-3).

But he is cautious about how the team is deciding between rest time and practise time with Melbourne’s offence facing some struggles.

"We want to get everybody knowledgeable about their own position and at least one other, that will still take some time," Vickerman said.

"I’m just really looking forward to the FIBA window and the practice reps coming out of that, having weeks to prepare for teams will be so important.

"It’s a learning process for us about how we teach through this period. We are clearly slipping in a few areas right now but we had the energy to finish today’s game which is really important so maybe we are doing some things right as well."

Ware said the team was feeling the effects of a hectic start but had to find ways to stay ready to play.

"It’s really difficult but you just have to take care of your body and we have been doing a good job of recovery, practices and we have to keep that up and keep being professional about it," Ware said.

"You know what your body needs and we’ve been getting that in."