Melbourne Storm star Billy Slater is free to play in the NRL grand final against the Roosters.

After a marathon hearing, Slater was found not guilty by the three-man judiciary of a shoulder charge that had threatened to rob him of a fairytale farewell to the game on Sunday night. 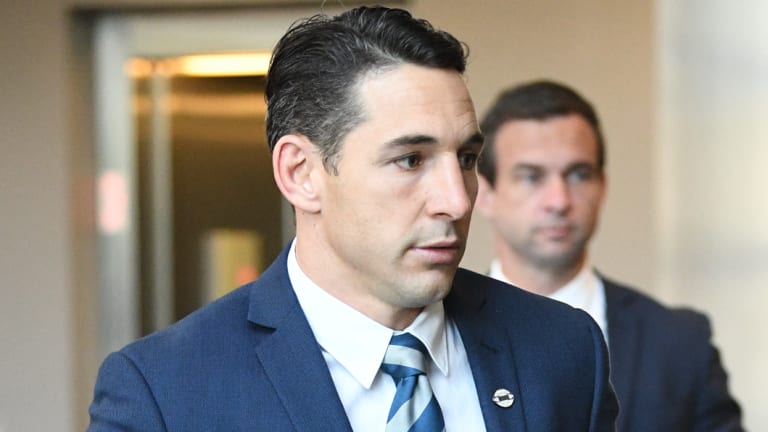 Final fate: Billy Slater arrives at NRL Central on Tuesday evening ahead of his judiciary hearing.

At one of the most highly anticipated hearings in recent years, Slater was cleared by the three-man panel of Bob Lindner, Mal Cochrane and former Roosters skipper Sean Garlick.

Judiciary chairman Geoff Bellew instructed the panel to ignore any commentary on Slater’s shoulder charge and reach their verdict ‘‘completely free of emotion or sympathy’’, and to not factor in that ‘‘the next game in the competition happens to be the grand final’’.

After a lengthy deliberation behind closed doors, it was decided Slater could take his place for the Storm. Slater breathed a massive sigh of relief when he realised he had been cleared.

were in this incident,’’ Slater said afterwards.

‘‘Now it’s important for me to focus on the game. I haven’t started my preparation for the game as of yet, and that starts now.’’

Slater also thanked the Storm and Ghabar for keeping his career alive a further 80 minutes. He became emotional when the verdict was handed down and was almost immediately embraced by Bellamy.

The decision will also be met with plenty of resentment, not to mention upset plenty of rival clubs, especially the Roosters.

The Queensland and Australian icon said during evidence that he had two weeks to prepare for last Friday’s 22-6 win over Cronulla and studied every try scored by their two wingers, including Feki.

‘‘I noticed Feki scored eight tries every time by pinning his ears for that [left] corner,’’ Slater said.
‘‘I do that to give me that advantage and understanding and knowledge of what they are likely to do and what they are most likely to do in that situation.’’

Slater, however, said Feki deviated from his plan to target the corner post and stepped off his left foot to come back in-field.

‘‘His eyes go from the tryline to me,’’ Slater said. ‘‘Feki raises his elbow to my head level, so not only am I in a bad body position with him veering back towards me, he raises his elbow so I have to protect myself with my left side of my body. I turn my head to avoid contact with his elbow . . . so there’s no head collision.’’

Slater said the initial contact was with his left pectoral muscle, not his shoulder, and he felt his ‘‘jaw flush against [Feki’s] right shoulder’’. He also pointed out there was still ‘‘tenderness in his hip’’, and it was this contact that ultimately causing Feki to fly through the air over the sideline.
Feki was not injured.

NRL counsel Anthony Lo Surdo argued Slater had other options available to him but failed to expand on what he should have done.

High-flying lawyer Nick Ghabar, whose case was assisted by former NRL chair Paul Conlon, said Slater’s effort did not include an unacceptable risk of injury to Feki.

Slater said he had been clocked at 33km/h at training, and there was no way he could have stopped. ‘‘I had a nano-second to make a decision,’’ he told the judiciary.
Slater’s Storm teammates will join him in Sydney today