The ACT Meteors have called on the Canberra community to get behind their push to set up a WNCL finals berth with a Big Bash atmosphere at Manuka Oval on Friday.

They're fourth on the WNCL ladder, with one win and one loss, but host two home games when the stop-start competition resumes on Friday. 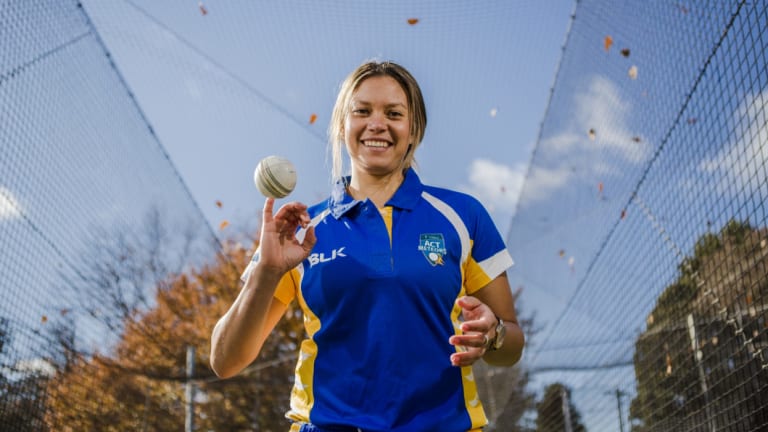 Angela Reakes says the Meteors have the chance to set up a WNCL finals berth in Canberra this weekend.Credit:Jamila Toderas

The Meteors will play second-placed Victoria in a day-night game on Friday, before taking on the Western Fury on Sunday.

Coach David Drew named a 13-player squad for the weekend, with Anna Lanning (meniscus) and Nicola Hancock (stress fracture) both added to the squad as they come back from injury.

Hayley Jensen was unavailable due to her commitments with the New Zealand squad ahead of the women's World T20 in the West Indies.

Meteors vice-captain Angela Reakes said they had the chance to set up their bid for a spot in the final with two wins over the weekend.

"If we can get some points on the board we can probably secure our finals position and that's our goal here," Reakes said.

"But again if we lose the hard thing is we might be out of finals with two games to go.

"But in saying that we saw that the [NSW] Breakers lost in the first round so the competition is a little more even now, so anything could happen.

"The day-night match normally brings a few people and the atmosphere is pretty cool under lights. It's similar to Big Bash cricket where there's a little bit of hype around it."

It's been more than six weeks since the Meteors' last game and Reakes has spent that time playing men's grade cricket to keep in touch.

Drew said both Victoria and the Fury would have weakened teams this weekend, but he warned against them taking either team lightly.

It will be his first games in charge of the Meteors since taking over the reins from new Cricket ACT chief executive James Allsopp.

"Victoria and WA are going to be tough, even though they've got a few of their players out," Drew said.

"We can't take anyone lightly and that's the big thing we'll try to get through to the girls.