Of the 103 pitches that Mets starter Zack Wheeler threw against the Nationals at Citi Field Sunday afternoon, only 51 of them were strikes.

He walked the first batter he faced on four pitches, and left the game with two outs in the fifth inning, having walked in a run and left the bases loaded. In all, he walked seven and was charged with just as many earned runs in a 12-9 loss.

“Embarrassing day for me,” said Wheeler, whose earned run average is now 10.24 after two starts. “That’s one of those that you just forget.”

Wheeler will have to figure out what went wrong before moving forward, as will reliever Tim Peterson, who replaced Wheeler. Peterson threw a wild pitch to allow a run on his first throw. He went on to walk five Nationals in 1⅓ innings.

“We’ve got to throw the ball over the plate,” Manager Mickey Callaway said after his team dropped two of three over the weekend.

Wheeler, who went 10-1 in his final 12 starts last season, maintained that he felt fine physically, but his timing and mechanics were off. Callaway noted that Wheeler’s arm was “a tad late,” and that Wheeler needed to work on finding a consistent arm slot and release point during his bullpen session between starts.

“The command, the control, just too many walks,” Callaway said. “He’s a better strike thrower than that.” 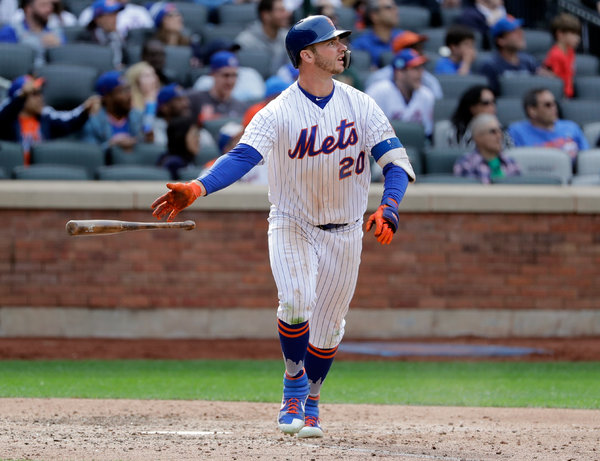 The Mets trailed 6-1 when Wheeler left the game, but the offense picked up in the late innings. While the Nationals roughed up Wheeler for five runs in the second, the Mets managed to break out with five runs of their own in the seventh.

Nationals starter Max Scherzer, a three-time Cy Young Award winner, was unable to finish the seventh, and was charged with four runs. Still, he picked up the win to improve to 1-2 on the season.

Mets rookie Pete Alonso continued his hot start. With two runners on base, Alonso, who had doubled off Scherzer in the sixth, belted a three-run shot over the fence in left-center two batters after Scherzer left the game.

“We did a really good job of fighting in the later innings,” Alonso said. “Just us coming back from that deficit, I think that’s a special characteristic in a team.”

While Wheeler struggled early on last year, he figured it all out in the second half. Callaway insisted the solution could be a familiar one.

“The good thing is we fixed it before,” Callaway said. “We’ll be able to fix it again.”

Catcher Travis d’Arnaud was activated from the injured list, and reserve catcher Tomas Nido was optioned to Class AAA Syracuse.

D’Arnaud, who entered the game as a pinch-hitter in the seventh, returned to the majors less than a year after undergoing Tommy John surgery.

“It feels good,” said d’Arnaud, who grounded out to third in his first at-bat. “It was a long road. I’m very grateful to be back, and be back in the big leagues.”