Mets’ Brodie Van Wagenen Isn’t Ready to Give Up on His Roster, or His Manager

If the Mets had fired Mickey Callaway as manager on Monday, they would have conceded that something was flawed with their plan. Brodie Van Wagenen, the general manager, is not about to do that.

The Mets wanted an architect who would try to win immediately, and Van Wagenen, a former agent filled with energy and charisma, sold them last fall on a blueprint to do it. A slow, disciplined rebuild held no appeal for a franchise with just two winning records in the last 10 seasons. In this age of tanking, that qualified as noble.

It also might have been reckless, and for now, it cannot be reversed. Van Wagenen inherited Callaway, but changing the manager now, after 45 games, would have loudly signaled trouble. Nobody is happy with the poor start, but teams almost never make significant trades this early, so the Mets might as well stay the course and hope.

“This is our team,” Van Wagenen said on Monday, with his boss, the chief operating officer Jeff Wilpon, looking on. “We’re proud of it, we believe in it, and we’re going to make every effort in our control to improve upon it and see if we can’t get into this race and capitalize on this mission statement.”

Fulfilling that mission statement — win now and in the future — got harder over the weekend when outfielder Yoenis Cespedes broke his right ankle in an accident at his ranch in Florida. Cespedes, who is recovering from operations on both of his heels, had a “violent fall,” Van Wagenen said, curiously refusing to be specific, except to confirm that Cespedes had not fallen off a horse.

The Mets need to stay upright this season, because they risked so much in Van Wagenen’s first trade, when he sent the Seattle Mariners two top-100 prospects — outfielder Jarred Kelenic and pitcher Justin Dunn, who are both playing well in the minors. In return, he got a top closer in Edwin Diaz and an eight-time All-Star second baseman in Robinson Cano, and he shed the unwanted contracts of outfielder Jay Bruce and reliever Anthony Swarzak.

Diaz is terrific, but closers are relatively easy to find; two of the best this season signed discount free-agent deals last winter — Arizona’s Greg Holland (one year, $3.25 million) and Minnesota’s Blake Parker (one year, $1.8 million). Trading top prospects for Diaz seemed like an overreach, but Cano, in theory, would generate more offense.

Instead, through Sunday he was hitting .245 with a .293 on-base percentage and a .374 slugging percentage, all career lows. He failed to run hard — or run at all — twice during the Mets’ lost weekend in Miami, and though Callaway benched him on Monday for the first game of a series against the Washington Nationals, it was mostly a planned day off against a tough left-hander, Patrick Corbin.

“We didn’t get into those details,” Cano said after batting practice, when asked if Callaway had cited his lack of hustle as a reason for the benching. “We talked about it yesterday. I apologized the day before, and that’s something that I accept, my mistake. I made that error, I apologized. I’m going to keep leading by example and just move on.” 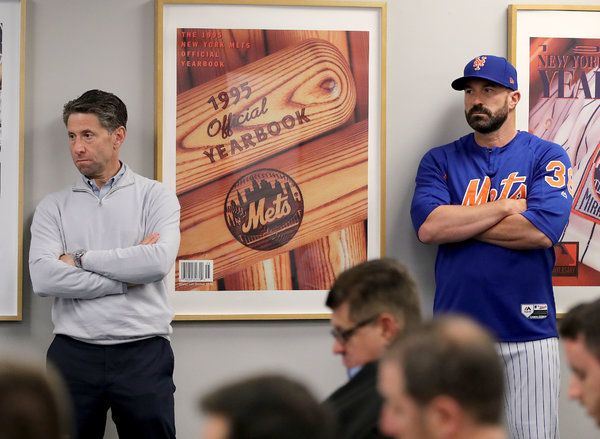 Cano’s example has always included a casual style of play. It has worked for him in an extremely durable 15-year career, but he turns 37 this October, and he served an 80-game suspension last season for violating baseball’s policy on performance-enhancing drugs. The age, the failed test — and the contract through 2023 — might have given other teams pause, but Van Wagenen, of course, is Cano’s former agent.

“Robinson Cano has health, he has talent, and he has a burning desire to be great,” he said, when asked if Cano still seemed like a wise investment. “Those are characteristics that we look for in our clubhouse from all players, and I think he possesses those in spades.”

That may be true, but there is no denying Cano’s age, or the fact that most winning teams have younger compositions. In the last five seasons, only one player older than Cano has had at least 500 plate appearances for a championship team: Carlos Beltran, for the 2017 Houston Astros. Beltran, who was 40, retired after that World Series.

“I’ve been swinging good,” Cano said. “I’ve been hitting balls right at guys. I’m just, like I always am, a positive guy and preparing myself every single day to help this team win a game.”

Van Wagenen added other veterans last winter without much to show for it. Infielder Jed Lowrie (age 35) has not played this season because of a knee injury. Catcher Wilson Ramos (31) was hitting .238 with two homers through the weekend. Reliever Justin Wilson (31) is out with a sore elbow, Jeurys Familia (29) has a 5.51 earned run average, and outfielder Keon Broxton (29) has been designated for assignment.

It looks bleak now, and also a bit farcical, because that is how things always seem to look for the Mets. But Callaway — the manager “for the foreseeable future,” as Van Wagenen put it — tried to lend perspective.

“This is a normal Major League Baseball season,” Callaway said. “There’s ups and downs. There’s tons of history that says that our team, and any team, can climb out of the hole we’ve put ourselves in and do something special. And I definitely believe that.”

He has to believe it, like Van Wagenen and Wilpon and the rest of the organization, because at this point there is no other choice. Sparing Callaway — for the moment, anyway — shifts fans’ attention away from the manager and back to the people who constructed the roster.

“The finger-pointing is not going down the chain of command to the players and coaches,” Van Wagenen said. “We built this team in the front office.”

This is their vision, for better or worse, and just because they want to win does not mean they will.