When the Mets hired Brodie Van Wagenen as their new general manager last October, they wholly embraced, even promoted, his status as an unconventional outsider — a converted player agent. The team made a similarly unorthodox addition on Tuesday, announcing that Jessica Mendoza, a baseball analyst for ESPN, would join the team’s front office as a baseball operations adviser to Van Wagenen.

The Mets said Mendoza, a softball gold medalist in the 2004 Olympic Games who joined ESPN in 2007, would focus on player evaluation, roster construction, and health and performance. But in noting that Mendoza also would retain her high-profile role on “Sunday Night Baseball” telecasts, the announcement gave a new dimension to questions about objectivity for ESPN. The network has long covered sports while also paying leagues billions of dollars each year to air them, and it has increasingly seen its own employees blur the lines between covering and participating in sports.

Van Wagenen said at a news conference Tuesday morning that hiring Mendoza furthered the team’s efforts to shake up the way it does business.

“I was an outside-the-box hire,” Van Wagenen said. “I’ve been a believer that you need to get new voices and fresh perspectives in any room, especially when you are making decisions.”

Mendoza, 38, has a sterling history in softball and baseball. She was one of the best college softball players ever, and later won a gold medal at the 2004 Athens Games and a silver in 2008. She has been with ESPN for about 12 years and became a color analyst on “Sunday Night Baseball” — the network’s flagship baseball program — in 2016.

While Mendoza will evaluate players and provide input on roster construction, Van Wagenen said she would be especially influential in the areas of health and performance and technology. He also said she would work for the Mets during baseball’s annual general manager and winter meetings in the off-season, suggesting her role would be more consequential than those of others — including the ex-Yankee Alex Rodriguez — who are both broadcasters and advisers for teams. 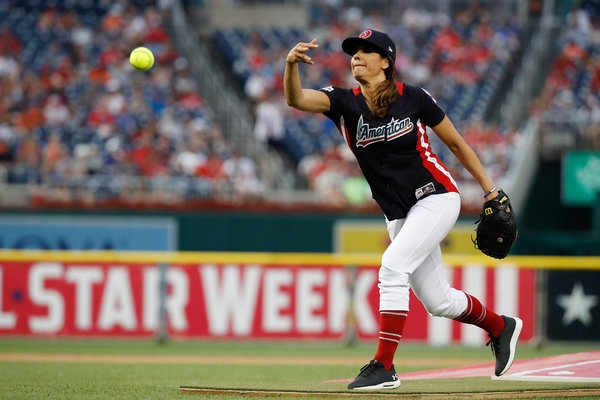 Mendoza’s deal with the Mets includes a confidentiality agreement, Van Wagenen said, adding that she would not share on her broadcast “anything she gleans from our operation.” She also will not be allowed to share with the Mets anything she learns about other teams through her ESPN duties. Mendoza will be in the Mets’ training camp in Port St. Lucie, Fla., on Friday.

ESPN has long had a revolving door between the playing fields and the broadcast booth. Just last week, Jason Witten left “Monday Night Football” to return to his N.F.L. playing career, one year after Jon Gruden did the same to return to coaching.

Still, Mendoza’s hire is different. She is perhaps ESPN’s highest-profile baseball voice, one of the network’s most important employees on its most important baseball broadcast. She is currently scheduled to be in the booth for a June game between the Mets and Atlanta Braves.

ESPN shrugged off suggestions of conflict of interest, and argued that Mendoza was far from the first baseball broadcaster to navigate such concerns. “There are numerous examples across networks of these type of arrangements where commentators work closely with teams, and we will be fully transparent about Jessica’s relationship with the Mets,” said Josh Krulewitz, an ESPN spokesman. “We have complete faith in her ability as a leading M.L.B. voice for ESPN.”

ESPN’s relationship with baseball is especially intimate. The network also employs Rodriguez, who is a special adviser for the Yankees, and David Ross, a special assistant for the Cubs. On Tuesday, ESPN also announced that the Yankees pitcher C.C. Sabathia would contribute to various ESPN television shows this season, mostly in coverage of sports other than baseball.

Other networks have similar situations: The retired baseball players Frank Thomas and David Ortiz, who both work for Fox, also have roles with their old teams. But Van Wagenen’s insistence that Mendoza would have input on important baseball decisions seems to set her apart from other broadcasters’ or ex-players’ roles as “special advisers,” a role that tends to be more ceremonial than substantive. Ross and Rodriguez are not listed as part of the front office on their respective teams’ websites, and Thomas is an adviser for business operations. When Ortiz’s role was announced, he focused on his duties of recruiting free agents and making community appearances.

Like ESPN, the Mets are accustomed to the revolving door in the baseball industry. Van Wagenen was hired from Creative Artists Agency, where he represented Mets stars like Jacob deGrom and Yoenis Cespedes. In taking the job, Van Wagenen divested himself from his stake in C.A.A., and he has said that he will recuse himself from any contract negotiations with past clients, including deGrom. If that wasn’t confusing enough, Mendoza is also represented by C.A.A. And then there’s Tim Tebow, working his way up through the Mets’ minor-league ranks while remaining with ESPN as a college football analyst.