Australian fans are baying for blood following their worst season in 60 years and backs coach Larkham could be offered up as the sacrificial lamb. 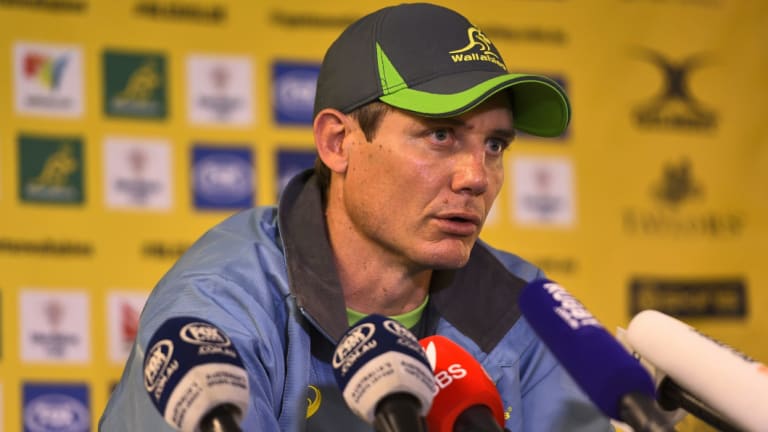 Stephen Larkham has been sacked as the Wallabies attack coach. Credit:Brett Hemmings

The Wallabies lost nine of 13 Tests in their worst return since 1958 (in years where 10 or more games have been played) as the national side struggled for consistency in almost every department.

Cheika was spared the axe as Rugby Australia boss Raelene Castle announced Scotland director of rugby Johnson would start with the Wallabies in March.

Castle wouldn't confirm a timeline for the decision and only that she would have to rubber stamp any recommended changes.

All four assistants are under pressure but Larkham's numbers as attack coach are one of the most in decline.

The Wallabies try-scoring average almost halved this year, dropping from an average of 4.21 tries per game in 2017 to 2.31 this year.

But one source told The Sun-Herald that Larkham had barely touched the attack this season.

If Larkham is axed it would mark an incredible fall from grace for the former Brumbies player and coach who Cheika anointed as his successor just last year.

The Brumbies played finals all of Larkham's four seasons at the helm, before he joined the national side in a full-time role following the 2017 Super Rugby season.

He's been a Wallabies assistant since 2015, the year Australia surprised the rugby world by making the World Cup final.

Johnson will start six months before next year's World Cup in Japan in a move that will see him return to Australia after 12 years overseas.

The former NSW captain has worked with Scotland coach Gregor Townsend to turn the small Test nation into Six Nations and World Cup contenders over the past few years.