AS FUN as they are, Leeds may be better off applying to play in the NBA – because second season syndrome has well and truly taken hold.

In this mad, chaotic game of basketball – which every Whites game becomes – Marcelo Bielsa’s side were undone by the same old problems. 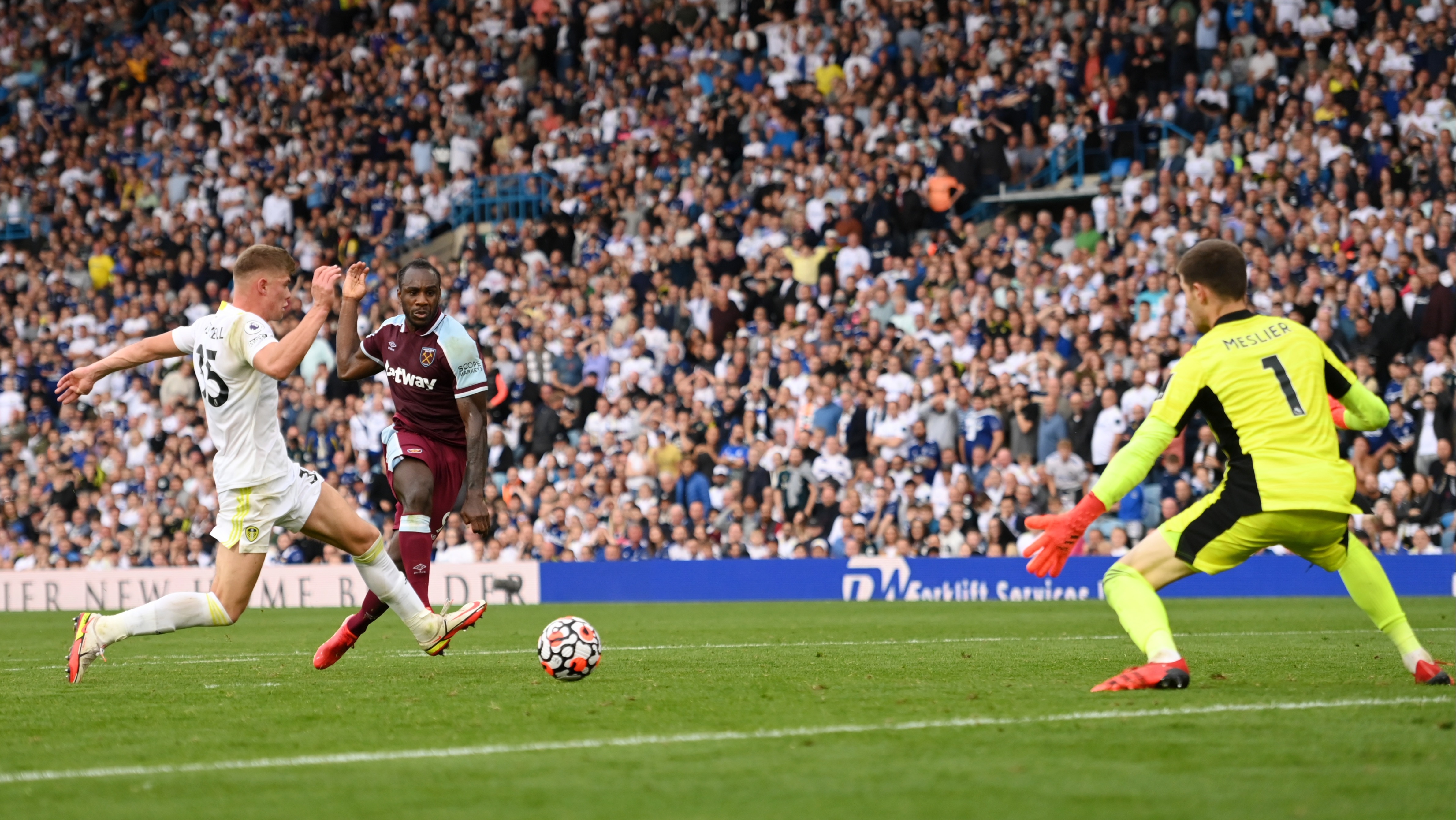 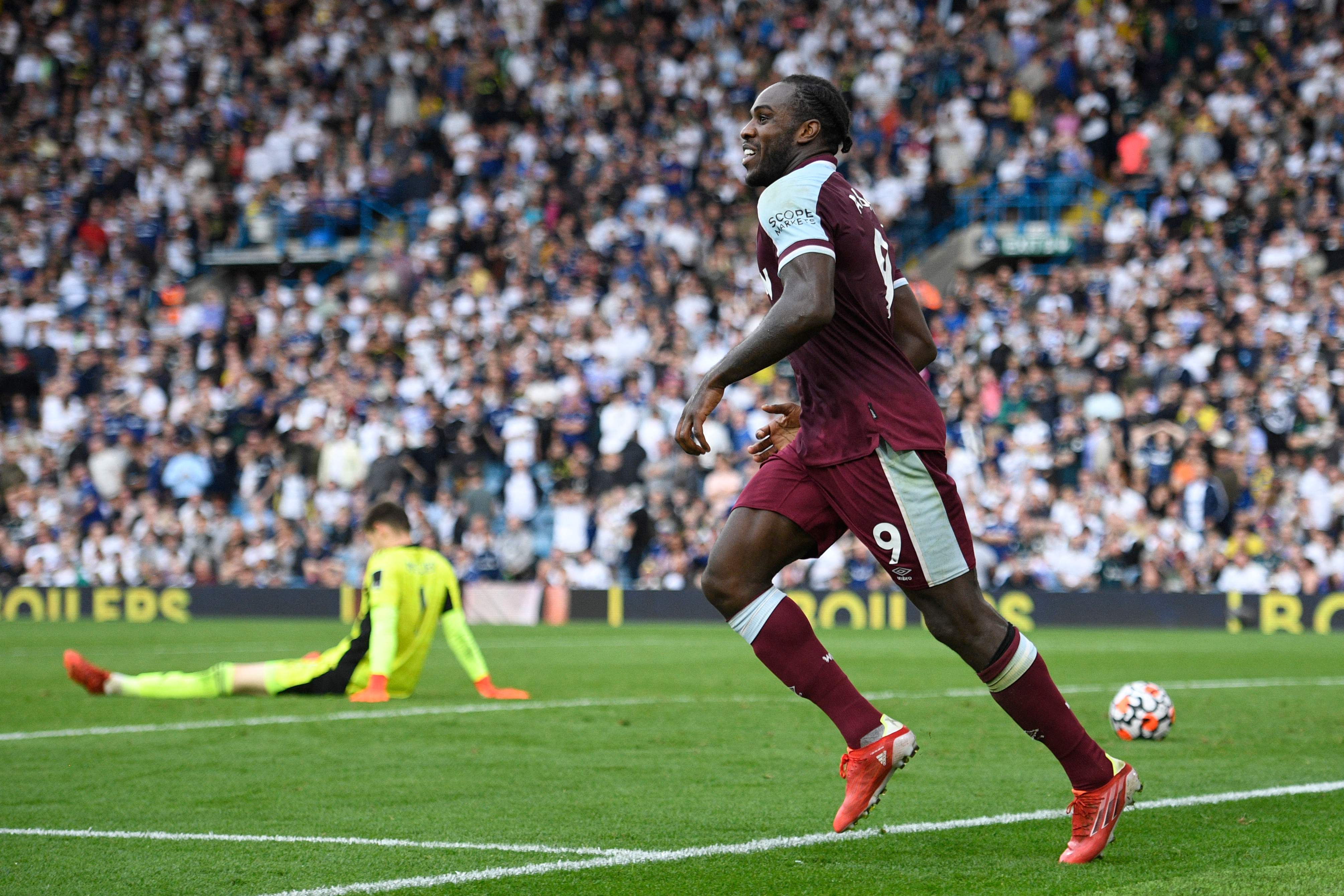 Wasteful in front of goal and as leaky as it’s possible to be in defence – the Leeds United way.

Michail Antonio was the West Ham hero again, ruthlessly punishing them on the counter at the death to notch his fifth of the season.

Raphinha put the hosts ahead with a peach but they were reliant on the excellent Illan Meslier in goal and missed a hatful of openings to win it.

Junior Firpo’s own goal had the Irons back in it, and from then on there was only one likely winner.

And with their 20th shot – to Leeds' 15 – of a helter skelter afternoon, Antonio made it three wins from six for West Ham while Bielsa’s side remain stranded in the bottom three.

With the suspended Pascal Struijk and injured defenders Luke Ayling, Robin Koch and Diego Llorente missing for Leeds there was a debut for teenager Charlie Cresswell – son of former Whites striker Richard.

Striker Patrick Bamford was also out but Raphinha’s inclusion was a massive boost having been a doubt.

Hammers boss David Moyes made 10 changes from the side who beat Manchester United in the Carabao Cup on Wednesday.

Jarrod Bowen was the only survivor, with Antonio back from his ban.

Cresswell had the unenviable task of masking Antonio and the Hammers’ man mountain had the first chance of a blistering, ridiculous game.

The hosts were opened up just six minutes in but keeper Illan Meslier did brilliantly to get down and deny Antonio’s low shot across goal. 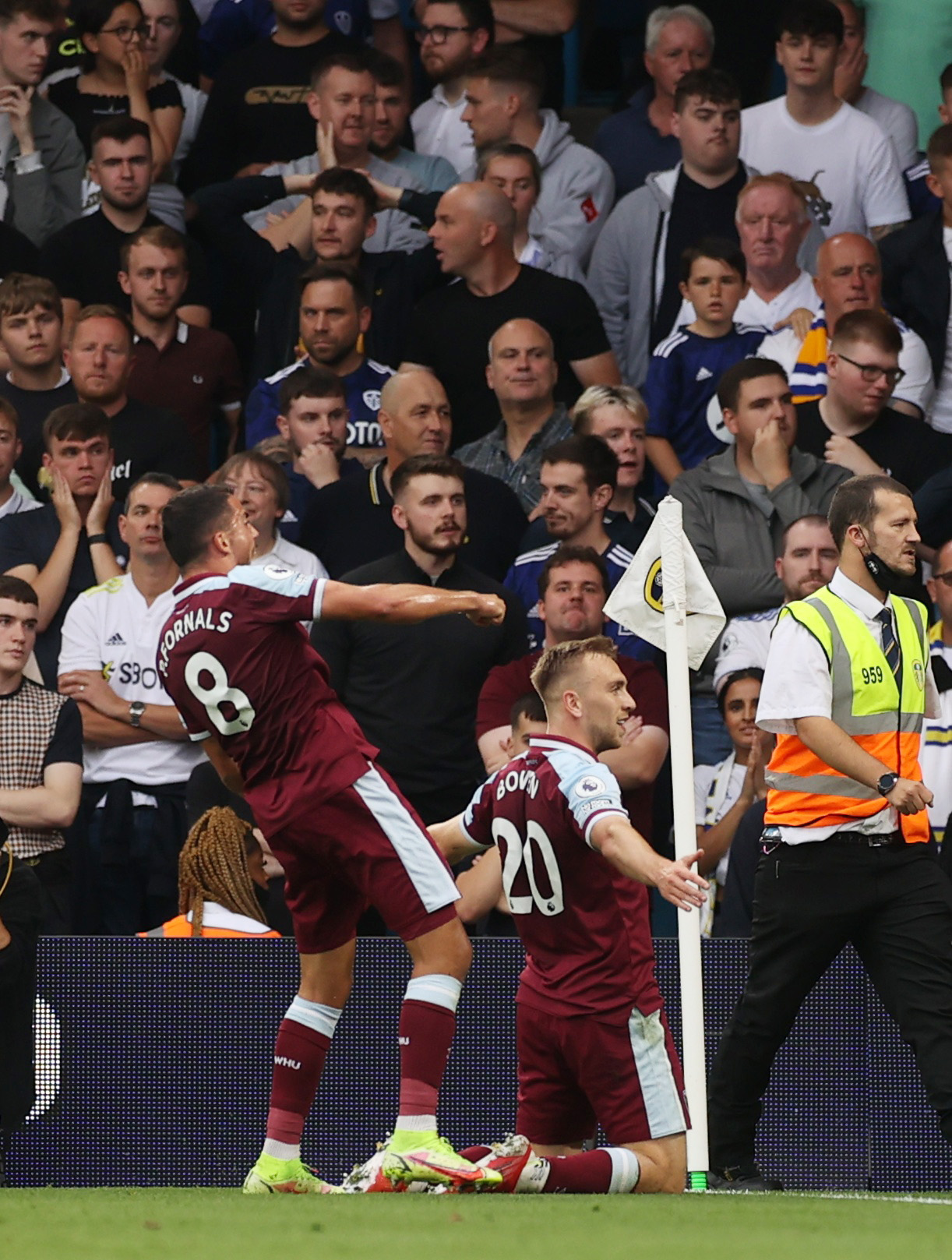 The young French stopper was the saviour again three minutes later, tipping behind Said Benrahma’s curler at full stretch to his left.

But Leeds soon took control with their full-throttle pressing game to leave the Irons all dazed and confused.

Stuart Dallas had their first opening, forcing Lukaz Fabianski into a fingertip save from the top of the box.

And they had their opener 19 minutes in – a blistering counter-attack which sent Elland Road into a frenzy.

Tomas Soucek’s woeful pass allowed Rodrigo to nip in, charge down the left and cut the ball back to Mateusz Klich.

On the edge of the area, the Pole had covering bodies around and showed great awareness to see Raphinha unmarked behind him. 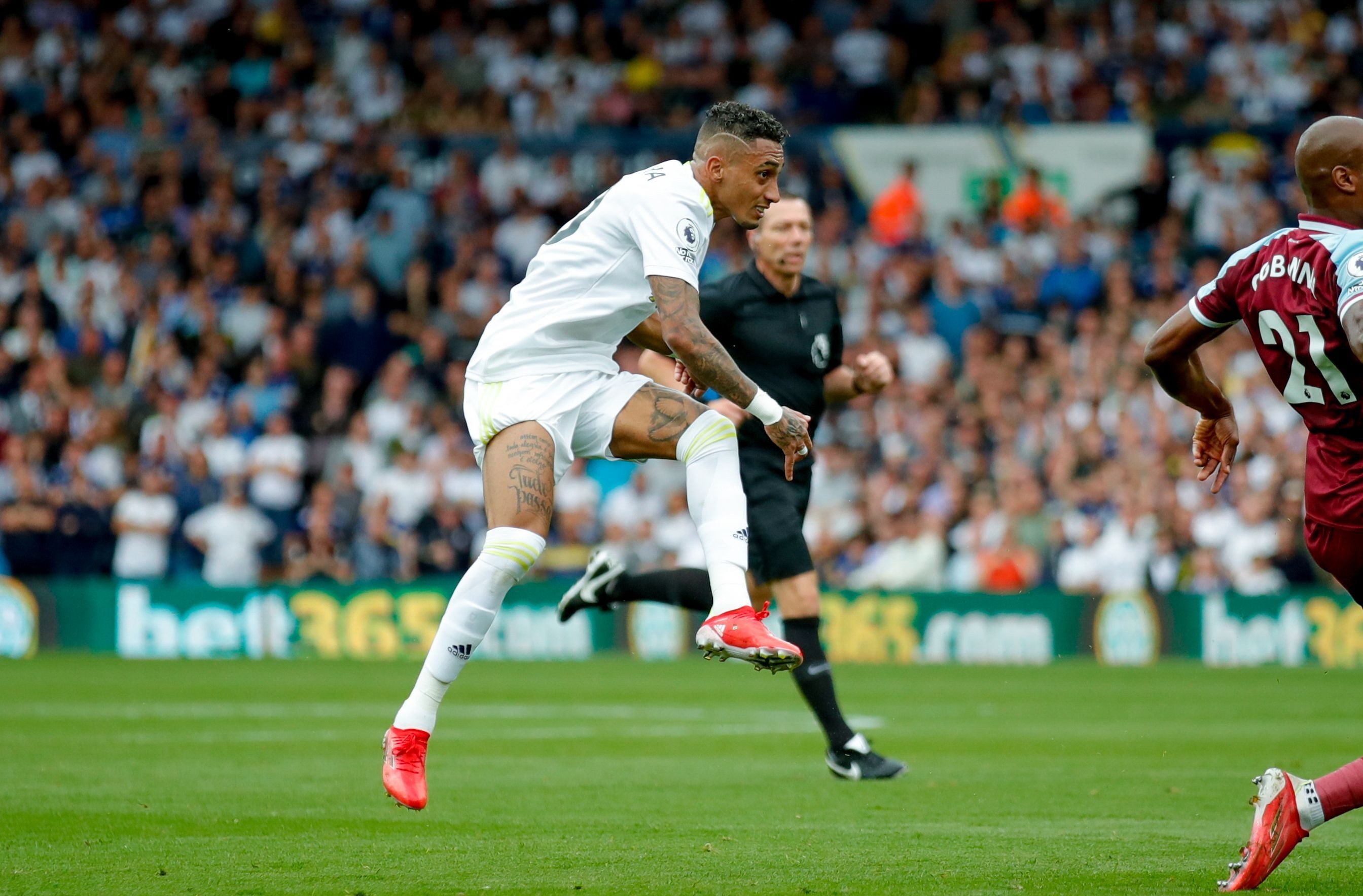 Layed perfectly into his path, the Brazilian hit it low, first time into the bottom corner.

It was Raphinha’s fifth Prem goal from outside of the box since making his debut last October to draw him level with Spurs’ Son Heung-min.

His third of the season, the winger nearly made it two soon after from a near-identical position but the curling effort came back off the post.

For all Leeds’ good work, a mistake is only ever around the corner and Kalvin Phillips threw in a howler just before the break, failing to cut out Antonio’s ball to Pablo Fornals.

But nothing looked like getting past Meslier all afternoon and he was up to it again, making himself huge to deny the Spaniard.

The Hammers finally found a way past him via Soucek’s tap in from Aaron Cresswell’s free-kick after Meslier spilled it under pressure from Antonio. 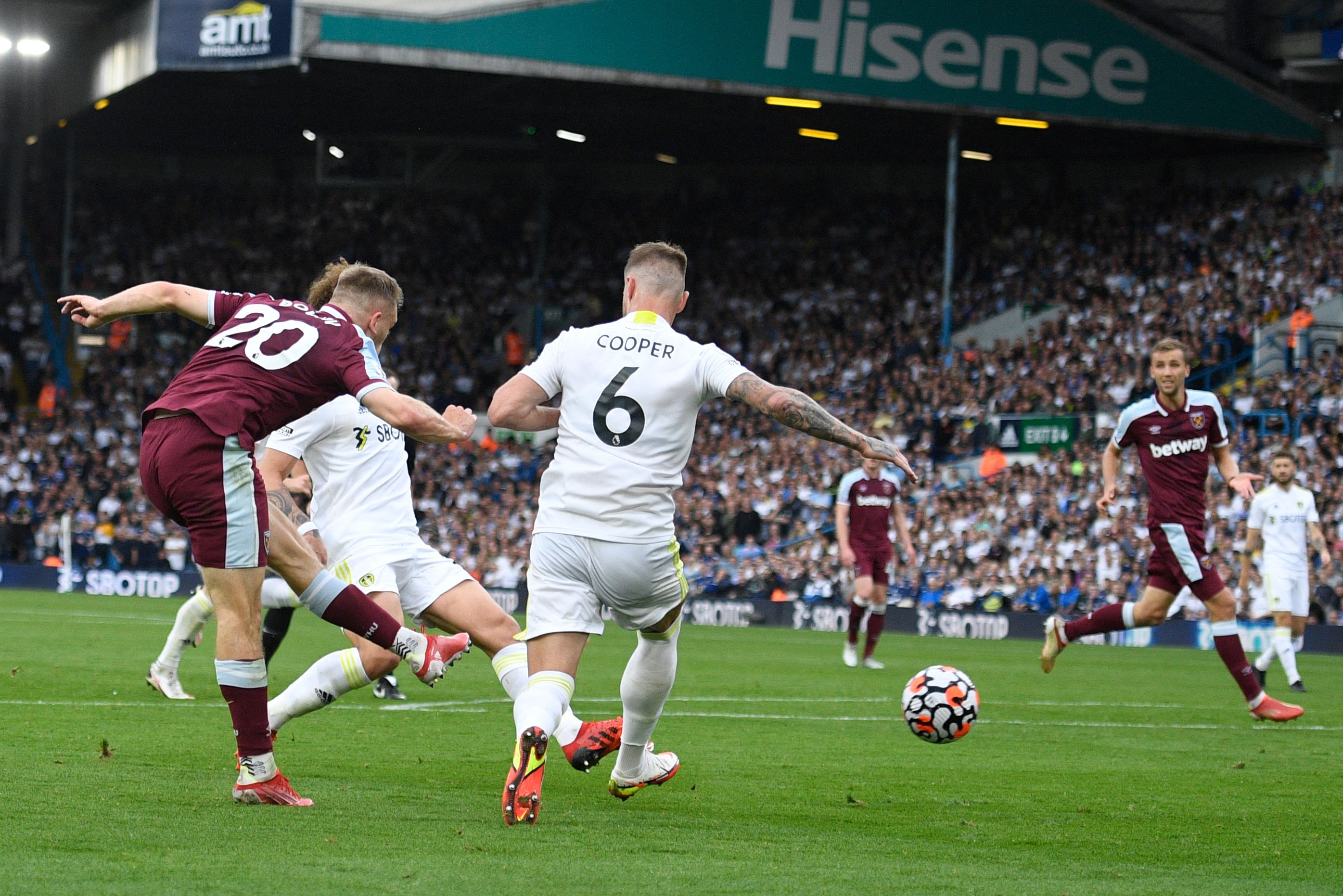 Ref Kevin Friend went to his monitor and correctly disallowed it one he’d seen that Antonio had clearly smashed the keeper in the face with his forearm.

The striker was booked as the Meslier lay in a crumbled heap, but he was back up soon enough to smartly keep out a Soucek header.

Klich really should have then made it 2-0 after being teed up by Raphunha yet somehow spooned wide with the goal gaping.

And it came back to haunt them on 67 minutes when Bowen’s shot took two deflections before flying past Meslier.

Found in acres on the right by Vladimir Coufal, the winger cut in and let fly – only to see it ricochet off both Liam Cooper and Firpo. 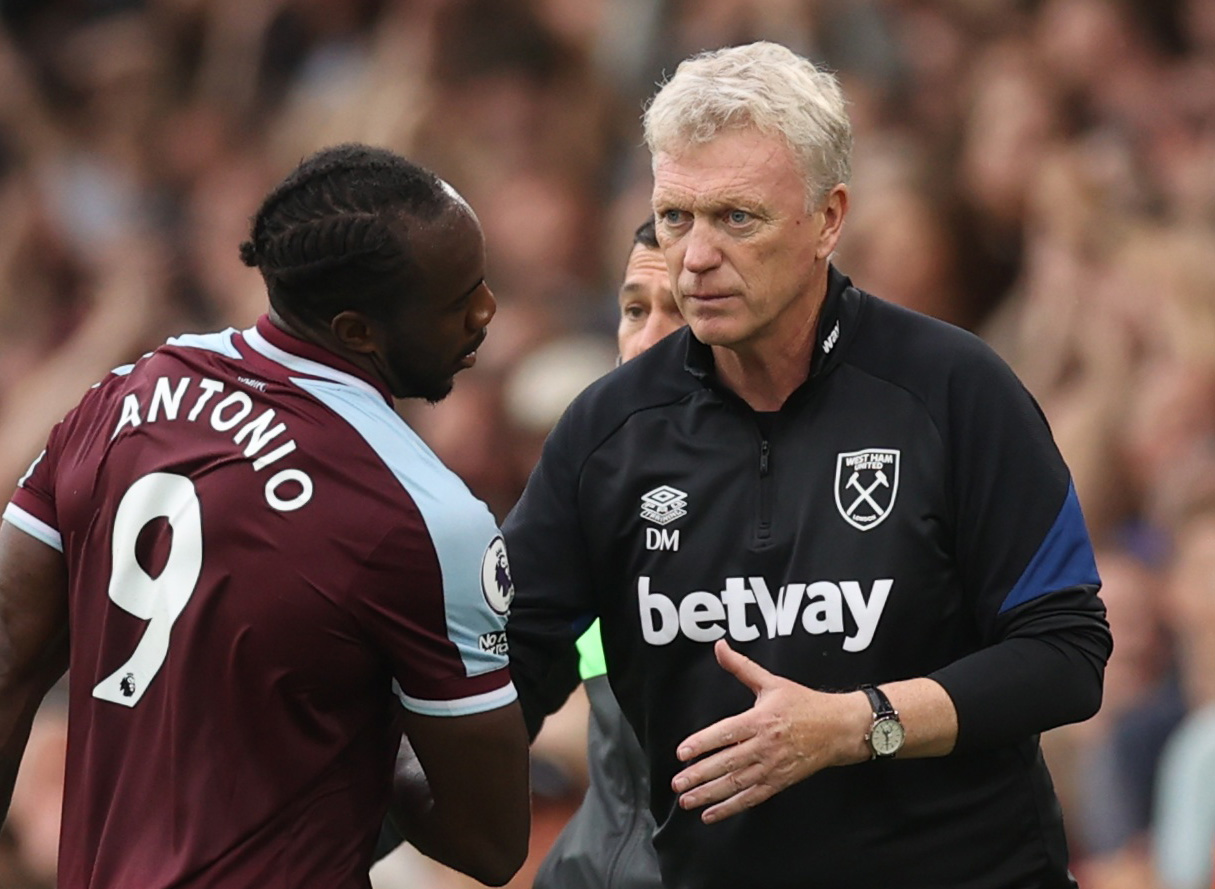 The east Londoners, having just about kept alive in this ding-dong battle, now smelt a winner.

Antonio had a decent chance five minutes from time, swivelling brilliantly to shake off the defender but his low shot from an angle was blocked by Meslier.

But he finally got his goal in the 90th minute with Leeds ripped to shreds at the back… again.

On the counter, Rice picked it up free on the right and found Antonio completely unmarked in the middle.

The striker expertly nipped it through Jamie Shackleton and showed all the composure everyone now expects from him to nonchalantly slot past Meslier.