Jake Odorizzi kept up his impressive run, pitching two-hit ball over six shutout innings and leading the Minnesota Twins past the Yankees, 7-3, on Saturday.

The Twins had lost nine straight times at Yankee Stadium, including the 2017 American League wild-card game, before Odorizzi and three home runs lifted them.

“Historically, we haven’t played too well here, before my time and even last year,” Odorizzi said. “So it’s good to finally get that win that we’ve been searching for I think three years, whatever it’s been.”

Gary Sanchez hit his third home run in two games for the Yankees, who activated third baseman Miguel Andujar from their abundant injured list after he missed 28 games with a shoulder tear. Andujar went 1 for 3 with a walk but also made two errors, misplaying a grounder early and later making a wild throw.

“First game back, good to have him back, obviously,” Yankees Manager Aaron Boone said. “Obviously, a couple misplays in the field. Bounced back, made a couple good plays out there, but that’s just something we’re going to have to continue to grind through.”

Odorizzi (4-2) won his fourth start in a row, having outdueled Justin Verlander and the Houston Astros, 1-0, in his previous outing. 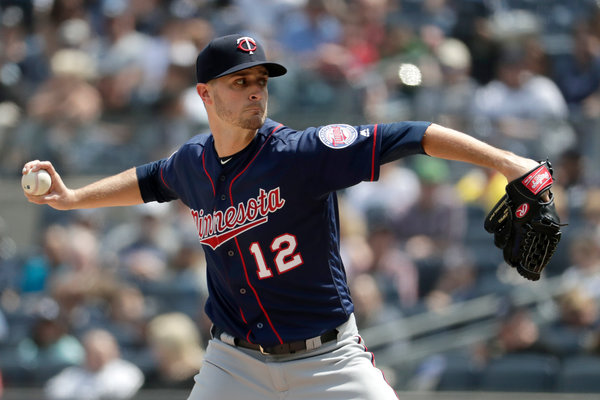 This time, he allowed only a single to D. J. LeMahieu leading off the third — he was picked off first base — and a single to Andujar in the sixth. Odorizzi struck out eight and worked around four walks.

Mitch Garver and C. J. Cron homered off J. A. Happ (1-3) and Nelson Cruz went deep in the ninth. The Twins had lost 14 of 15 in the Bronx over all and are 10-26 at the current Yankee Stadium, their worst record in any ballpark.

Jonathan Schoop added an R.B.I. single in the eighth after being robbed of a three-run homer by right fielder Cameron Maybin four innings earlier.

Twins reliever Trevor Hildenberger allowed two runs in the seventh on a wild pitch and an R.B.I. single by LeMahieu. Blake Parker finished the inning by retiring Luke Voit but allowed a long home run to Sanchez to start the eighth. Taylor Rogers finished up with a perfect ninth.

The Twins went ahead by 2-0 in the third when Garver’s sixth home run of the season barely cleared the right-center field fence.

Voit went 0 for 4, ending his on-base streak at 42 games. He reached in his final 11 games of last season and in his first 31 this year. It was the longest active on-base streak in the majors.

Yankees pitcher James Paxton (left knee inflammation) was put on the injured list, He exited Friday’s game after throwing 64 pitches in three innings. … The start time for Sunday’s series finale has been moved to 4:05 p.m. The change was prompted by inclement weather in the forecast early in the day.