It is Wednesday evening at rush hour and Mikaela Shiffrin, perhaps the most dominant athlete in the world, strolled unobserved through a crowded Central Park.

After shattering a host of records on the just completed Alpine skiing World Cup tour — most victories in a season (17); most career women’s slalom wins (40); only skier to claim the overall, super-G, giant slalom and slalom championship in one winter — Shiffrin arrived in New York for a round of appearances on morning and late-night television talk shows.

Since she is obscured by a helmet and reflective goggles while competing in a sport mostly contested in Europe, it could be a given that she would not draw much attention during a casual walkabout in her native country.

But that may soon change.

With Lindsey Vonn’s retirement last month, Shiffrin, at 24, is the unquestioned face of American ski racing. Moreover, her ever-escalating, dazzling accomplishments are becoming so outrageous, she has a chance to enlarge the crossover celebrity status that Vonn achieved.

Consider this: In addition to the 10 Olympic and world championship medals Shiffrin has already won, she is on a pace to win as many as 125 World Cup races, or 39 more than the current career record. 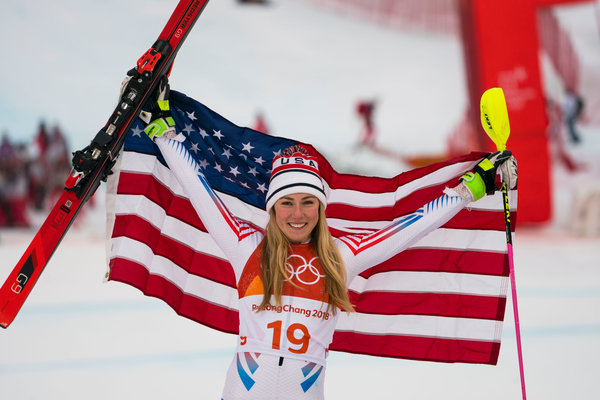 That would be like rewriting baseball’s record book by hitting 1,107 career home runs.

When such a staggering possibility was explained to Shiffrin as she tranquilly ate dinner at a clamorous Midtown Manhattan restaurant, she shook her head. She smiled but nonetheless looked pained.

“As soon as I start acting like I’m the Pied Piper of ski racing,” she said, “that’s when things are going to go wrong.”

And yet, off the snow, Shiffrin has embraced her role as the sport’s archetype. She has spent recent months energetically conducting news interviews, stoking her social media platforms and bolstering her many notable commercial sponsors, who see her as the bridge to a younger generation of skiers because her career could last another decade.

In another step that required the naturally shy Shiffrin to adapt to a more prominent role, she has tried to mentor younger or less experienced racers on the American women’s team. It came at the urging of top officials on the United States ski team, who in early 2018 surprised Shiffrin by asking if she had considered what her legacy might be.

Answered Shiffrin: “My legacy? I’m 23 years old. I might not even be halfway through my career yet.”

The conversation continued, and Shiffrin better understood the question.

“It wasn’t about developing a legacy but more about trying to figure out how my role can be beneficial to the whole team,” Shiffrin said Wednesday. “It’s not enough to have one face of American ski racing. You want many faces. You want a team that is the best in the world.”

The United States ski team is currently anything but atop the ski racing rankings. Shiffrin’s incandescent season helped mask the struggles behind her. Shiffrin was the only American to win a World Cup race in the 2018-19 season, and only Vonn made it to a post-race podium as well, placing third in the downhill at the world championships, the final race of her career.

As she pondered how she could help, Shiffrin decided she could especially offer advice and guidance on acclimating to the pressure of the World Cup, because she joined the tour when she was 16.

“It is a highly intimidating atmosphere,” Shiffrin said. “When I came to the World Cup, I can remember starting way at the back of giant slalom races and thinking to myself, ‘I don’t belong here.’ And I didn’t want to race.”

Shiffrin has tried to keep her younger teammates from feeling similarly.

“The most important thing is for me to reach out enough so they know there’s a place they can go to feel safe,” she said. “We can talk. We want the team to be a nurturing environment.”

But unlike the vast majority of racers, Shiffrin has the versatility to enter multiple events at a variety of international venues, which means that she is frequently on the move and on a different training schedule from her teammates. That diminishes her contact with parts of the team. She also has her own staff of coaches, which includes her mother, Eileen.

But Tiger Shaw, the president and chief executive of U.S. Ski and Snowboard, said he had watched Shiffrin find a way to make the newest team members feel at ease.

Shiffrin’s obligations have also grown as a fund-raiser for the ski team, which counts on donations for 30 percent of its budget.

“She’s the centerpiece of a lot of events that have raised hundreds and hundreds of thousands of dollars,” Shaw said. “With her increasing star power, she will become more valuable, but it will also be more difficult because everybody only has 365 days a year on earth and she uses about 250 of them to be on snow.”

That schedule, Shiffrin insisted, will not change.

“I don’t know if I’m ever going to win as many races in one season as I just did,” she said. “But I know I won’t prepare and practice any less.”

That comment called to mind a time the precocious Shiffrin said she would never think of herself as ahead of schedule.

“That’s right, I always feel like I’m behind,” she said Wednesday with a sheepish grin.

Indeed, even though she was still enjoying her first hours back in North America after her magnificent season, there was no celebration on the docket.

Walking off into the night, Shiffrin, probably as good in her sport as anyone else in theirs, planned a typically early bedtime. There are now new responsibilities: She was due in a TV studio at dawn.