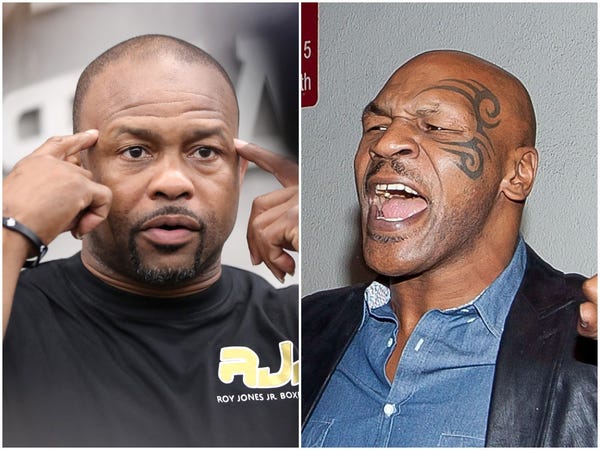 Since the rules of the November 28 exhibition were announced, which is an unofficial bout that will not count on their professional records, there has been speculation as to whether the fighters will actually try to knock one another out or not.

Boxing officials for the show have said that, because they are in their 50s, they can only compete for eight two-minute rounds and are forbidden from hitting each other too hard.

Tyson and Jones Jr. seem to have little intention of paying attention to that.

"My objective is to go in there with the best intentions of my life to disable my opponent," he said.

Jones said that he he's been proud of the footage Tyson has released, showing how fast and powerful he is.

"Most guys at 54 count themselves out," Jones said.

"Seeing Mike hit the pads, the bodybag, the way he's doing it … it's phenomenal. It's crazy. But we're freaks, and that's why this is such a big thing.

"We're two guys, the most explosive guys to ever touch a boxing ring. He inspires me by how hard he's working, and he's three years older than me."

Jones said he's been preparing with his utmost intensity because he's aware Tyson only knows only one way to fight — at full throttle.

"I prepare like I'm preparing for any other fight because I'm fighting Mike Tyson," Jones said.

"The last time [someone] went in and did an 'exhibition' with Mike Tyson got dropped in the first round. If you don't know that, there's something wrong with you.

"And if you're going in the ring with the legendary Mike Tyson and think, this is an exhibition, no headgear, really? Come on, brah. Keep it real."

One of Tyson's biggest motivations to get fighting-fit and perform in front of a worldwide audience is knowing that the fight will generate significant revenue, which he plans to donate to charitable causes.

However, he said he's still as serious about treating Jones as an opponent to destroy, and expects the people he's training with to kick his ass so that his body knows what to expect on November 28.

"I look at films of Roy when he's at his best because that's the guy I'm anticipating fighting," Tyson said.

"[I'm sparring] younger guys and they're showing me that from the looks of things I'm doing really well [but] if you don't kick my ass, you're fired.

As the exhibition is only one month away, Tyson said he will become increasingly excitable and irritable, and so will move out of his family house and endure the final preparations alone.

"It'll be impossible for me to stay with my family," he said. "There's no way they'll be able to live with me, they'll kick me out the house."

Boxing is an addiction akin to drugs, both fighters said

Though Tyson has taken part in an exhibition before, the last time he was in a professional boxing ring was in 2005, when he lost to journeyman Kevin McBride in Washington D.C.

Tyson said back then he was not enjoying boxing, was only doing it as a means to make money, and was a different person to who he is today.

"I was happy leaving the ring, dreading being in the ring at that time. I was fighting for financial purposes, I was on drugs back then," he said.

"I have a desire to do this now and that guy who was in Washington, D.C. was just the ghost of me.

"I'm just ready to do this stuff and I'm feeling really great and I want the world to see how great I look."

The WBC, one of the sport's four major sanctioning bodies, has produced a standalone title called the Frontline Battle Belt which the winner of next month's exhibition will take home.

It comes at a time when Floyd Mayweather ranted about their being too many belts in boxing. But that argument is not one Jones or Tyson support.

"You want to see me perform and you put a belt on the line … I'm sorry, but it's like drugs, I just can't say no," Jones said.

Tyson added: "He said it all. It's like drugs."