Mildly inebriated musings of a soccer-ignorant jackass who is half-asleep on the couch, watching a late-night World Cup match. 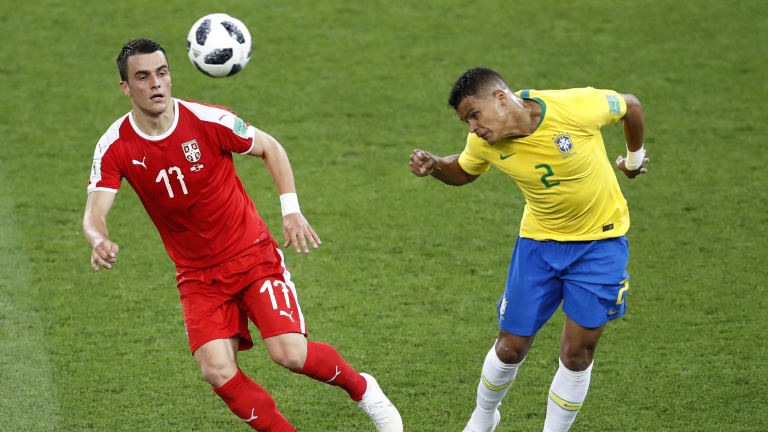 A game is on. Two teams are playing. One team all have Nick-Kyrgios-shaved-side haircuts, like they were trimming their sideburns in the bathroom, got distracted by mouldy tile grout, accidentally trimmed too high, then had to do the same to the other side to even it up. The other team are the cast of Narcos, Season 3: a few police officers, some DEA agents, and a couple of guys from the Cali Cartel who wanted to shift from drug trafficking into legitimate business ventures. Both teams are working hard: they’re running a lot, kicking a lot and gesticulating wildly at the referee a lot – both single-armed and double-armed. They’re very good at it. They have clearly done years of high-intensity ambi-gesticulatory drills.

Something happened! One of the Nick-Kyrgios-haircut guys was running along and the loose fabric of his baggy shorts lightly grazed against the leg of a Narcos (Season 3) cast member, knocking him to the ground. The poor player is howling in pain, possibly crippled for life. The other Narcos (Season 3) cast members are gesticulating wildly at the referee because their teammate is facing the very real prospect of a wheelchair-bound future. The crippled player gets a penalty, which makes him feel better and he jumps to his feet, looking chipper and ready to play again. Phew. What a relief. I was really worried about him.

Half-time. The camera cuts away to the actual World Cup trophy, which is a very ugly trophy and I don’t know why everyone wants it so bad – it wouldn't work on any bookshelf or mantelpiece, even paired with a decorative vase filled with dry bracken. The trophy appears to be two figures holding up the Earth as a representation of global goodwill, or it may be the upper thigh of Cristiano Ronaldo with all the skin ripped off so we can see the sinewy muscles and tendons holding up the ball joint of his hip. Which would make a bit more sense.

Second half. No goals yet. I’m wondering if these players could use a bit more motivation, maybe buy one of those little blank page journals with “Goals” on the cover – you can get them from Typo for 20 bucks. Then they can write down their goals for the year: things like, “Travel more with friends” or “Paint something I’m proud enough to hang on the wall” or “Score a goal in the World Cup and not keep kicking it sideways so it misses”.

Something happened! A Narcos (Season 3) cast member was on one side of the pitch, and a Nick-Kyrgios-haircut guy was on the other side, and they glanced at each other for a micro-second, and now the Nick-Kyrgios guy has fallen to the ground, howling in pain, possibly about to die. This is bad. Doctors are running over, there’s a stretcher, the guy may not make it … I think he’s gone … but nope, he gets a penalty and he springs back to life, fully fit and ready to play. I am so happy for him. It’s a miracle on the pitch.

The game is over. Nobody won. Both teams shake hands and they all fall over. I think soccer players may have the same genetic neuromuscular disorder as those fainting goats on YouTube. It’s a very unpleasant disorder to live with, but it’s still pretty funny to watch.

Danny Katz is an Age columnist.