US Open quarter-finalist John Millman is considering ending his magnificent 2018 season prematurely to ensure he's fully fit for the Australian season of tennis.

Millman, who stunned Roger Federer at Flushing Meadows in the fourth round last month, has not played since his defeat in New York to eventual champion Novak Djokovic because of a hip injury. 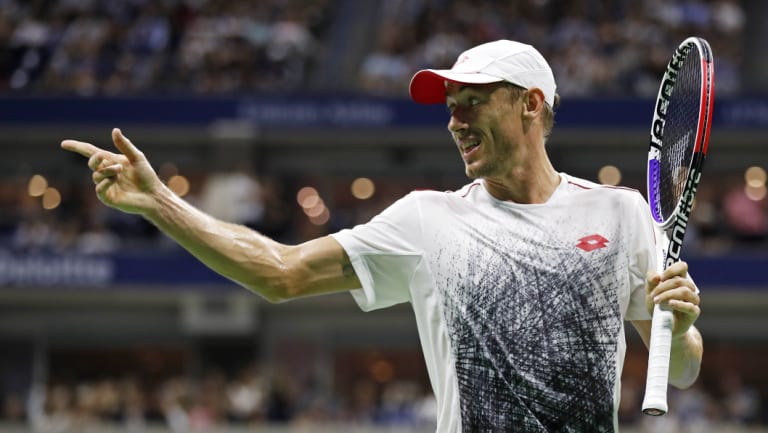 Home cooking: John Millman is keen to ensure he is in the best possible shape for the looming summer of tennis.Credit:AP

The affable Queenslander has risen to No.34 in the world rankings and although he's desperate to prolong the year and earn seeding for the Australian Open by moving into the top 30, the 29-year-old is wary of turning what he describes as a minor problem into a significant one.

"Just after the US Open I didn't recover as quickly as I would have hoped," Millman told ATP Radio.

"I got a scan while I was in Austria for the Davis Cup and it found I had a tear in my obturator which is one of the internal, external rotators of the hip."

The Australian season kicks off in Millman's home city of Brisbane on New Year's Eve and he's willing to write off the rest of 2018 if it means he'll be fit to play in front the fans who got behind him so enthusiastically during his New York heroics.

"Sometimes your body is not 100 per cent when you are playing because tennis is such a physical sport, but I am looking for improvements," he said.

"Otherwise I will have to call it a season a little bit earlier than I would like.

"The plan is to get to the indoor season in Europe and at least try to get to the Stockholm Open (next week) and see how we go there.

"But I need to be mindful because sometimes in the past I have pushed my body when it hasn't been 100 per cent and I have done some more damage.

"I am extremely humbled with the support I got, especially back home in Australia.

"They got on board … it was a special tournament for me. The thing for me is that I now know I can make a few more of these moments.

"I got a taste of it and I want more of it. Playing in Brisbane will be incredible. This (injury) is a little thing … it won't keep me out."

Meanwhile, new Australian No.1 Alex de Minaur says he's still coming to terms with his meteoric rise from world No.208 to 33rd in the rankings in the space of 12 months.

"It's an unbelievable feeling," de Minaur said. "I never thought this would happen any time soon.

"At the start of the year the goal was the top 100. I believed I had the level but it was important to bring that level and intensity week in, week out.

"That is what I am most proud of, that I have managed to accomplish this and play well many weeks in a row."