Richmond coach Damien Hardwick has lavished praise on Collingwood, declaring they were an "outstanding" side even after a heavy loss earlier in the season and the Tigers had adopted some of their methods.

Ahead of what has been tipped as the game of the season on Saturday, Hardwick was nothing but effusive about the third-placed Magpies, who have emerged as a premiership challenger but will be without injured match-winner Jordan De Goey on Saturday. 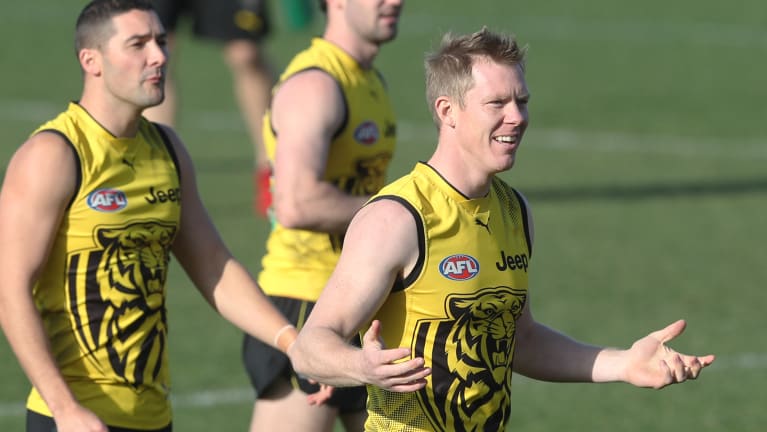 Damien Hardwick’s Tigers are top of the table, but he was full of praise for the Pies.

It was an interesting take from Hardwick, perhaps one to hone the focus of top-of-the-table Tigers, whose intensity dropped in the second half against St Kilda last week. However, the Tigers, complete with toughness, skill and depth, remain the team to beat heading into the final month of the home-and-away campaign.

"They (Magpies) have been terrific. I remember after we played them in round six, I thought they were an outstanding side then," Hardwick said.

"We took some things we thought they were doing really well, we looked at those and added a few of those dynamics to our game as well."

The Tigers prevailed by 43 points in round six, having led by 11 at three-quarter time. The Pies had come off only a four-day break from their Anzac Day clash against Essendon.

The Pies have defeated the Tigers just once in six matches since 2015 – by one point in round two, 2016. However, they head into this battle in fine form, having won eight of their past nine matches, including a demolition of North Melbourne last week when they boasted a kicking efficiency of 71 per cent. They were also manic inside attacking 50, scoring 10.4 (64) from forward-half intercepts – a trait of the Tigers but something Pies coach Nathan Buckley has urged his men to do.

"Bucks is coaching them really well and they're playing really well, they're really tough to beat, they've got a great system in place and they play that system really well," Hardwick said.

"It's going to be an incredible challenge for us to try and beat them but we certainly look forward to that, there are some things in our game we look forward to challenging ourselves against and seeing how the game pans out."

This will be the first time since 1974 that the two clubs have met after round 18 while each was in the top four, sparking great anticipation among the power clubs of the former VFL.

"You can understand the excitement. Both sides are playing a great brand of footy and we are looking forward to making it a great contest for the game of AFL," Hardwick said.

The Tigers expect Shane Edwards to play, having had an injury concern earlier in the week, but rebounding half-back Bachar Houli will not because of an ongoing groin injury.

"We'll take a conservative approach with him. He's probably started to miss too much footy, so we'll pull him back a bit, get a good training block into him again just to make sure he's ready to go," Hardwick said.

"It's one of those injuries where we could probably push the envelope, but we're not quite sure how it's going to respond, so we'd rather be a bit conservative and make sure when he's ready to go, he's ready to go. It's a little bit disappointing for us because he's such an important player for us, but we're hoping in the short term that turns around."