Both play first base and have made three All-Star teams since 2014, when Abreu joined the Chicago White Sox after defecting from Cuba. Both have played for only one major league team — Freeman for the Atlanta Braves — but have never reached the World Series. Both reside in the same statistical neighborhood: Abreu has a .294 career average and an .870 on-base plus slugging percentage, Freeman .295 and .892.

Now Abreu and Freeman will be linked in history as the most valuable players of the 2020 pandemic season. Abreu received 21 of 30 first-place votes from the Baseball Writers’ Association of America, while Freeman collected 28 of 30.

Jose Ramirez of the Cleveland Indians finished as the runner-up in the American League, with D.J. LeMahieu placing third. In the N.L., Mookie Betts of the Los Angeles Dodgers was second, and Manny Machado of the San Diego Padres was third.

The previous high finish in the award voting for both Abreu and Freeman was fourth place, and they are past the age of most winners. Abreu, 33, and Freeman, 31, become the first players who were over 30 on opening day of their M.V.P. season since the Yankees’ Alex Rodriguez in 2007.

Naturally, a season that was truncated to 60 games because of the coronavirus might have taken less of a physical toll than a normal schedule.

“It feels like 60 games has been 162,” Freeman said in October, as the Braves marched to Game 7 of the N.L. Championship Series before losing to the Dodgers. “But this is all worth it.” 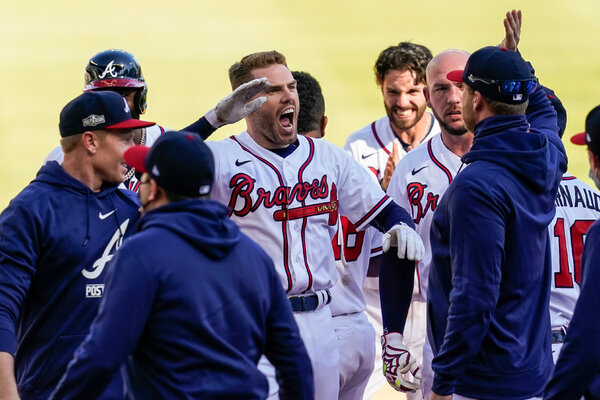 Freeman had especially acute challenges because of his fight with the virus in the weeks before the Braves’ July 24 opener. On July 2, he later told reporters, he woke up at 5 a.m. with full-body aches and a 102-degree fever. The next morning he awoke “in a pool of sweat,” he said, and the Braves arranged for him to go to Emory University for a nasal-swab test, which came back positive.

“I said a little prayer that night; I’ve never been that hot before,” Freeman said. “My body was really, really hot. So I said, ‘Please don’t take me.’ I wasn’t ready. It got a little worrisome that night for me. I took some NyQuil, Tylenol and I was able to go to sleep. I was just scared to go to bed. I was scared if I spiked even higher when I was sleeping what would happen. I woke up at 7 a.m. the next morning and I was 101.5, so I was like, ‘Whew, I can take the 101.’”

Even so, it took time for Freeman to regain his energy. He wore a mask and gloves around his young children, but would grow tired after 10 minutes of playing with their toy cars. He needed a nap every three hours, and lost his sense of taste and smell for about four days.

On July 17, Freeman learned he had received consecutive negative tests. He cleared a cardiac exam and blood work at Emory that day and returned to practice. A week later, he was batting cleanup on opening day against the Mets at Citi Field, and wound up with career highs in average (.341), on-base percentage (.462) and slugging percentage (.640) while hitting 13 homers, driving in 53 runs and leading the majors in runs scored (51) and doubles (23).

Abreu had his best season since 2014, when he won the A.L. Rookie of the Year Award after a decade of dominance in Cuba, where he started his professional career at age 16 and once hit .453 with 33 homers for Cienfuegos across a 66-game season.

The White Sox followed his lead, finishing with a winning record after seven consecutive losing seasons. They qualified for their first playoff berth since 2008 by going 35-25, but then lost their first-round series against the Oakland Athletics.

The White Sox have since hired the Hall of Famer Tony LaRussa, 76, to replace Rick Renteria as manager. The team has stuck with LaRussa despite the revelation that he was arrested in February on a charge of driving under the influence in Arizona.