Mitch Marner scored twice, the second on a short-handed penalty shot to give Toronto the lead for good, and the Maple Leafs beat the host Boston Bruins, 4-1, on Thursday night in the opener of their first-round playoff series.

Frederik Andersen made 37 saves and William Nylander and John Tavares also scored for the Maple Leafs, which swiped the home-ice advantage in the best-of-seven series as they try to advance through Boston for the first time in six tries. Game 2 is Saturday night.

Tuukka Rask stopped 29 shots for Boston, and Patrice Bergeron scored a power-play goal midway through the first period. But Marner tied it with about three minutes left in the period, sweeping in a rebound with such force he knocked himself off his skates.

Then, about three minutes into the second with Boston on a power play, the puck popped toward center ice and Marner had a clear path to the goal. When he was just outside the crease, Jake DeBrusk was called for bringing him down from behind, sending him crashing into Rask.

Marner lined up for the penalty shot, came at Rask from the left side and then slid over to the right faster than the goalie could follow. He flipped the puck into the open net to make it 2-1. 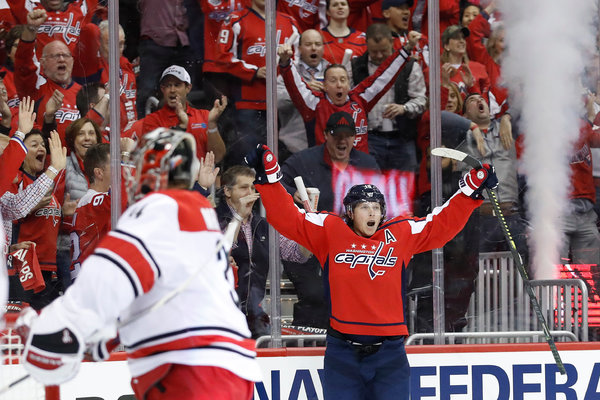 Backstrom scored twice and Ovechkin scored on the power play to fire up a raucous crowd in the first playoff game in Washington since celebrating the franchise’s first title in June.

It looked as if the Capitals would roll toward a statement victory against Carolina, which had not been in the playoffs since 2009, but the pesky Hurricanes turned up the heat.

Goalie Petr Mrazek bounced back from a rough start to make four huge saves early in the third period, and Svechnikov scored twice in his playoff debut to put some fear into the Capitals, who were outshot by 29-18 and outplayed for long stretches. Braden Holtby made 27 saves, and the Washington defense came up big on two late Carolina power plays. Lars Eller capped off the victory with an empty-net goal in the final minute.

FROZEN FOUR Billy Exell scored the go-ahead goal with 9:53 remaining, and the defending champion, Minnesota Duluth beat Providence, 4-1, to advance to the final in college hockey’s Frozen Four in Buffalo.

Justin Richards scored twice for the Bulldogs (28-11-2), who are attempting to become the first team to win consecutive titles since Denver in 2004-5. Richards and Dylan Samberg sealed the victory with empty-net goals in the final 33 seconds.

Denver played Massachusetts in this year’s other semifinal.

Providence (24-12-6) was denied an opportunity to reach its first championship game since 2015, when the Friars beat Boston University to win their first title.