Mo Salah fashion: how to dress like Liverpool's star player without spending your savings

The former Roma player shook off the struggles he had at Chelsea when he tried to crack their first team three seasons ago, and has emerged as arguably the best attacker in the whole division.

Truly honoured by this prize which was awarded to me by colleagues – very special day??

Truly honoured by this prize which was awarded to me by colleagues – very special day??

Salah's fellow players evidently thought he was No.1 when they voted him the PFA Player of the Year for 2017/18.

He looked dapper as ever in a classic tuxedo and bow tie when he picked up the award this weekend at Grosvenor House in Mayfair, London.

And the Egyptian still has a chance to improve on his season with Liverpool closing in on another top-four finish.

You can expect to see him tearing up the pitch in his chosen football boots for the season: the mint green X17+ 360 SPEED by Adidas – buy his exact pair here. 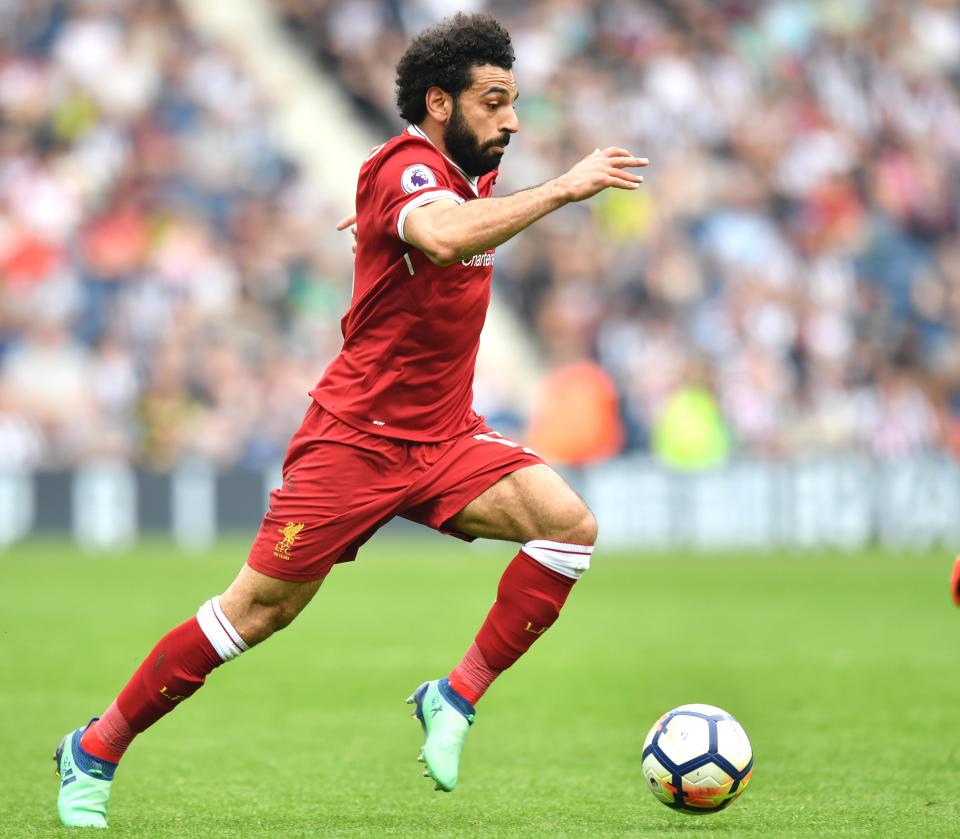 But while the 25-year-old is all flair, skill and blazing pace on the pitch, when he's not tormenting defenders, Salah prefers the understated look.

Opting for shredded jeans and a series of novelty T-shirts, Liverpool's star man enjoys keeping it loose on his days off.

But, unlike your average guy, he spends up to £1,250 on these low-key looks by designers like Fendi, Dolce & Gabbana and Dsquared2.

If you're a fan of his get-up, but you don't fancy splurging a month's salary on a casual top, we've picked out some high-street options of Salah's wardrobe so you can get his look for less. 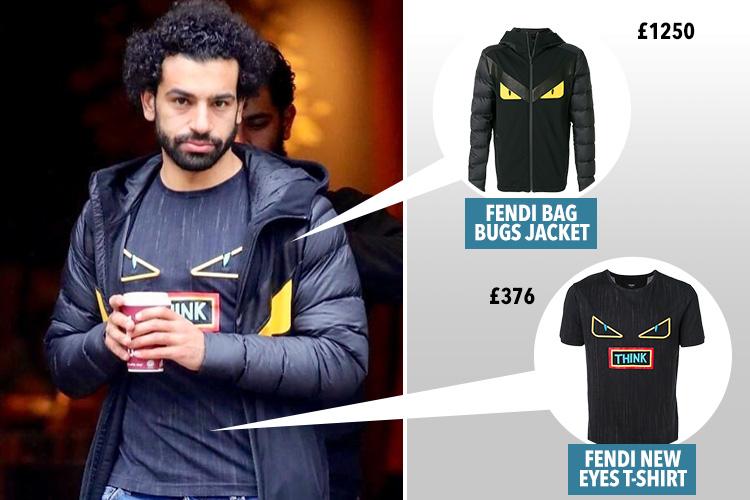 He may have looked a tad bleary eyed, but he was certainly not dressed down.

The Liverpool player was wearing Fendi on Fendi – a puffer jacket printed with Creative Director Karl Lagerfeld's signature evil eyes and a T-shirt stamped with the words 'THINK'.

We wonder if Salah was thinking when he dropped £1,626 on this casual outfit? 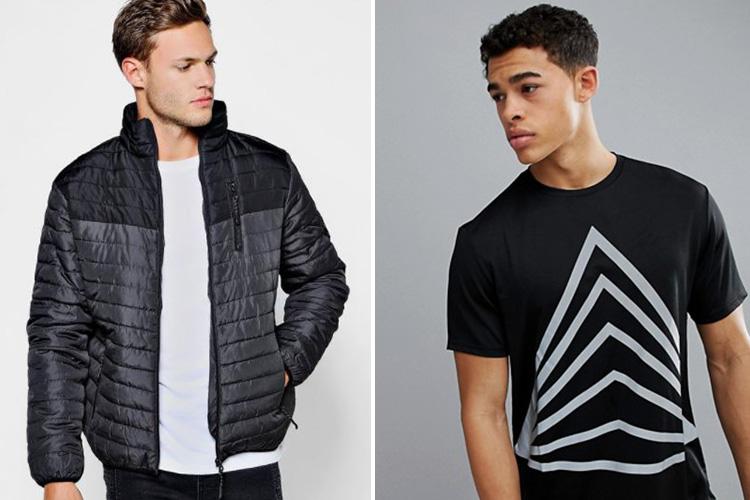 Meanwhile, ASOS's 4505 line has a reflective print T-shirt with the the same graphic feel as Fendi's. 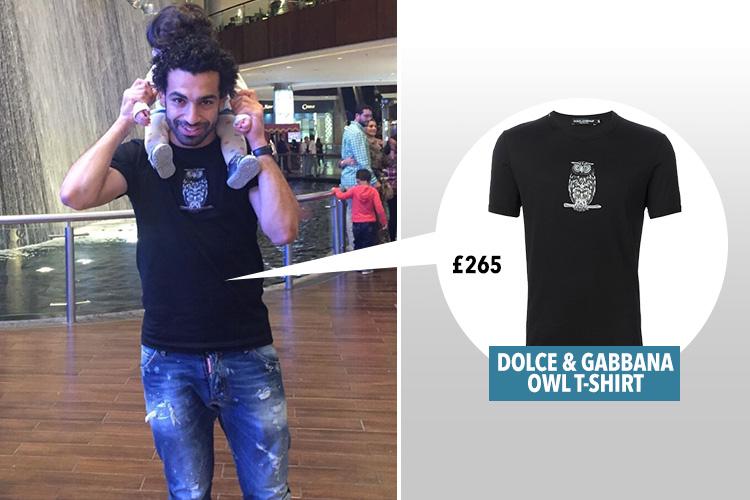 Mo Salah is quite the family man.

He married wife Magi in 2013 and one year later they had daughter Makka.

The four-year-old is named after the Muslim holy city Mekka in Saudi Arabia and Salah's Instagram feed is littered with photos of her.

But even when he is on daddy duty, Salah can be seen in designer clothes – here he is in a £265 Dolce & Gabbana T-shirt embroidered with an owl motif. 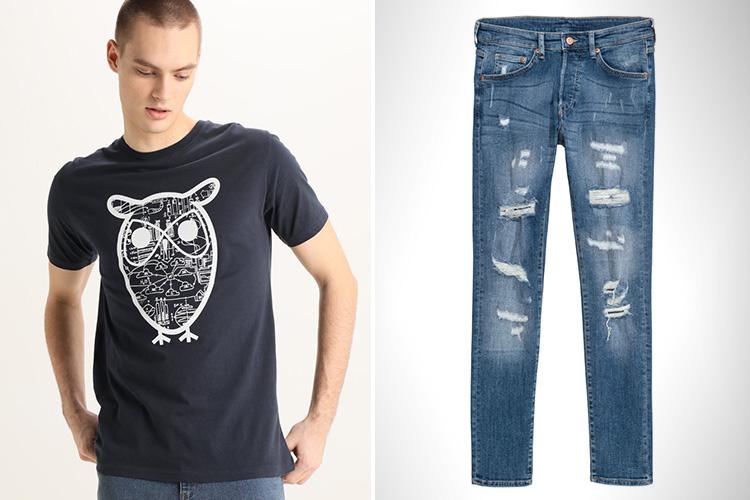 Knowledge Cotton Apparel have a T-shirt with a graphic owl printed on it.

Pair yours with some distressed skinny jeans and you've nailed Salah's off-duty look. 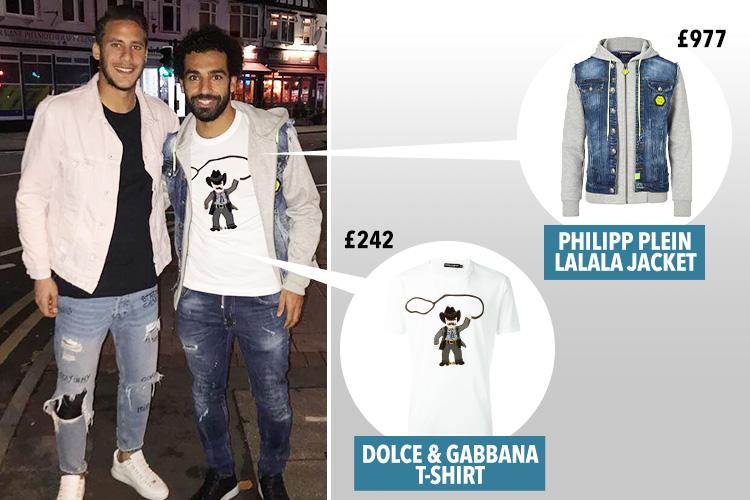 It seems that Salah is a serious fan of distressed denim and western-themed clothing.

The 25 year old posted this picture on Instagram of him out on the town with Egypt teammate and Stoke winger Ramadan Sobhi.

Both players are wearing ripped jeans – a footballer's favourite for sure.

But Salah took the look one step further, doubling up on denim with a Philipp Plein jacket and underpinning his look with a Dolce & Gabbanna T-shirt printed with a picture of a lassoing cowboy. 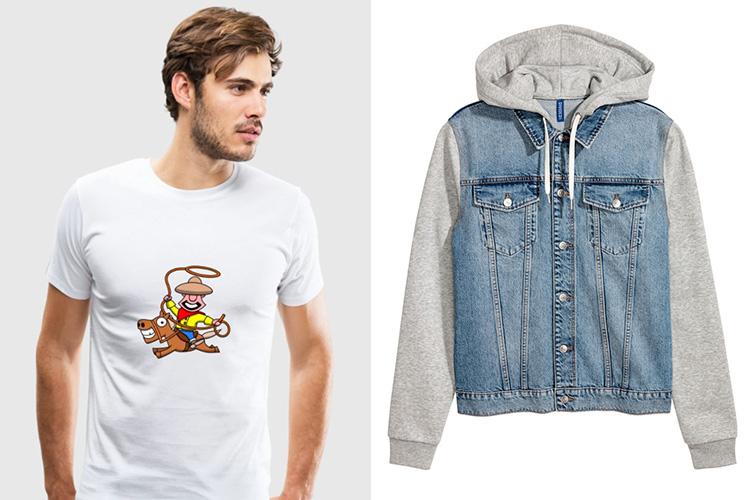 His outfit cost him a crazy £1,219, but you can get the look for less by shopping on the high street.

Spread Shirt have a T-shirt with a similar print and H&M's denim jacket has the same jersey sleeves and hood as Philipp Plein's £977 version. 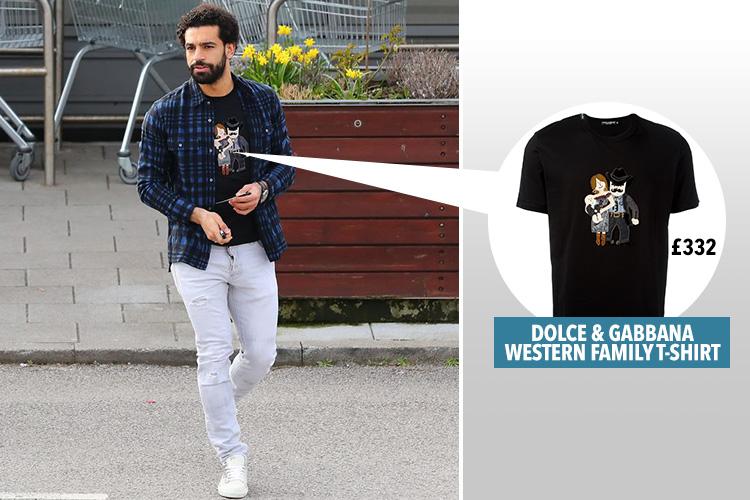 And the cowboy T-shirts don't stop there.

We spotted Salah out and about in Liverpool looking low-key but expensive all the same.

He was wearing yet another T-shirt by Dolce & Gabbana printed with a picture of a cowboy family that set him back £332.

The Egypt attacker took the western theme further, matching the motif to a checked button-down shirt and bleached denim. 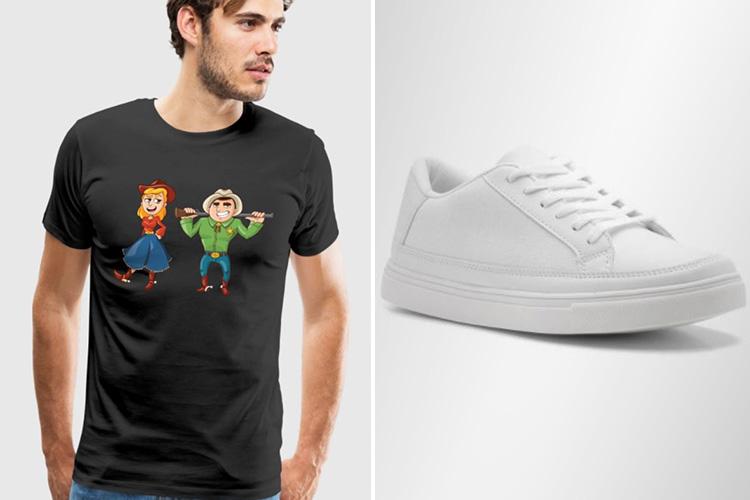 But you could buy 14 of these for the price of Dolce & Gabbana's designer version. 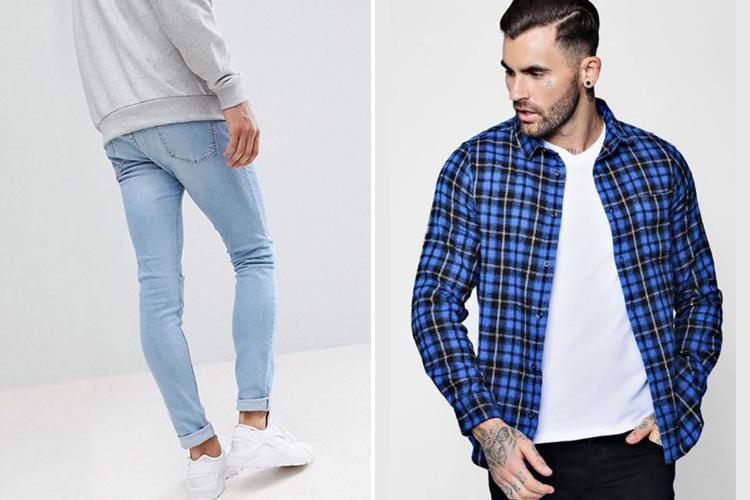 Layer yours under a plaid shirt and no one will know the difference.

Boohoo have a blue and black checked number that is almost identical to Salahs's. 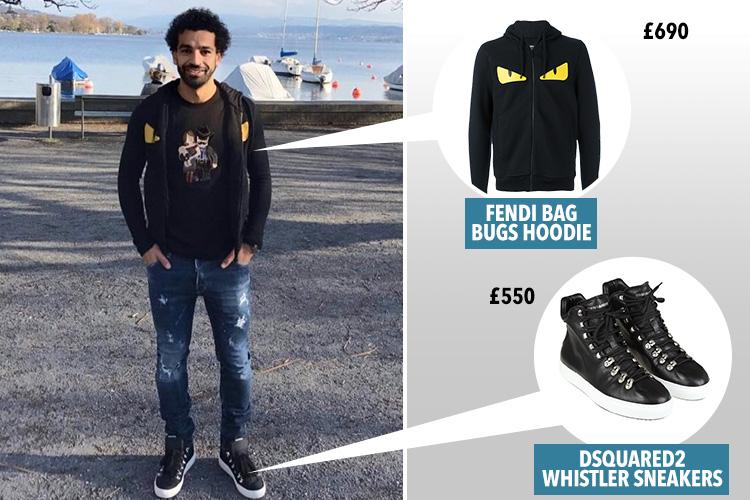 Last year, Salah took a trip to the seaside – posting a picture of himself beaming from ear to ear on Instagram.

But despite the location, he still didn't switch up his  usual uniform of a printed T-shirt and jeans, looking less nautical and more urban in his designer get up.

The Liverpool star was wearing one of his favourite Dolce & Gabbana T-shirts and yet another item from Karl Lagerfeld's eyes collection – a Fendi hoodie worth a whopping £690.

He grounded the look with a pair of Dsquared2 trainers that cost £550. 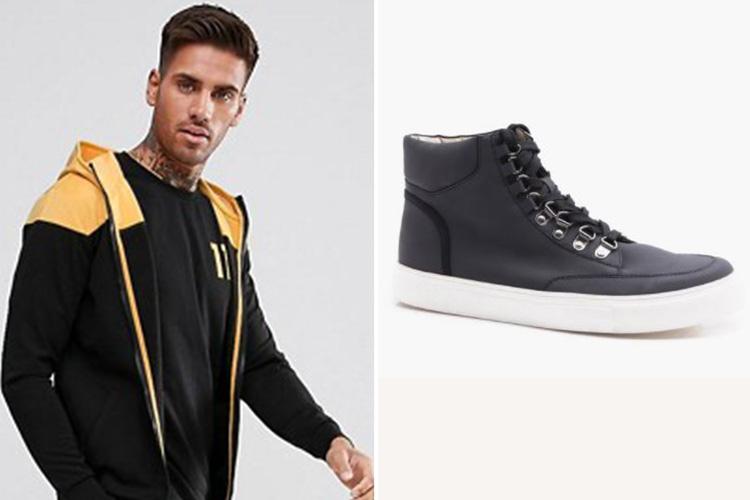 Made of faux leather, they have the same silver eyelets, high top silhouette and white sole but they cost £532 less. 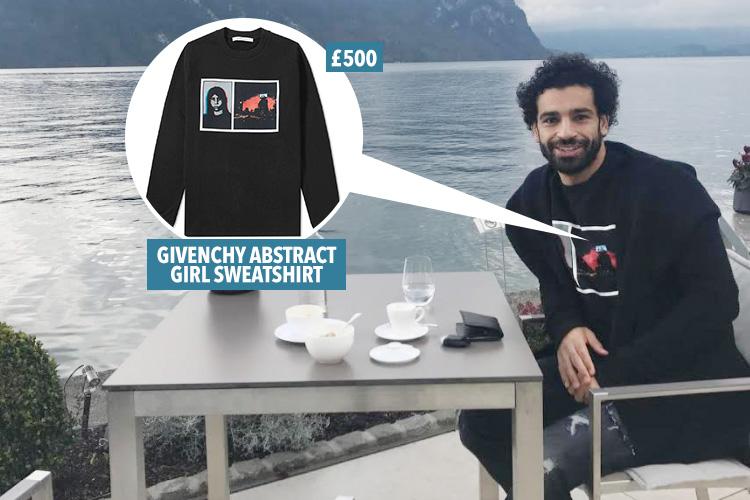 He recently uploaded this picture of himself recently on a trip away enjoying a morning espresso against a picturesque back drop of mountains and a blue lake.

But we couldn't keep our eyes of his Givenchy sweater which costs an eye-watering £500.

We've also spotted this item on Tottenham player Dele Alli – it seems to  be a favourite of footballer favourite. 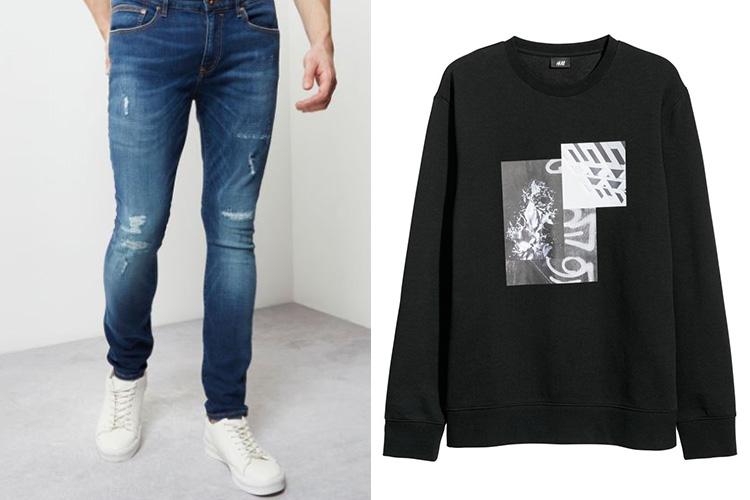 Team with a pair of distressed dark denim skinny jeans, which are a Salah favourite, and you've got the look down.