Mohawked Bushranger sends Tuggeranong back to the top of the tree

He already had a mohawk and plenty of "lair", but Jamal Nchouki added a hat-trick to help put a serious knee injury behind him.

The Tuggeranong Bushranger was sensational in the 46-22 win over the Queanbeyan Kangaroos at Greenway on Sunday, as the home side turned a close game on its head in the final 15 minutes.

Queanbeyan led 22-20 before the Bushrangers clicked into overdrive to run in four unanswered tries and climb back to the top of the Canberra Raiders Cup ladder, albeit solely on points difference from the Queanbeyan Blues and West Belconnen Warriors. 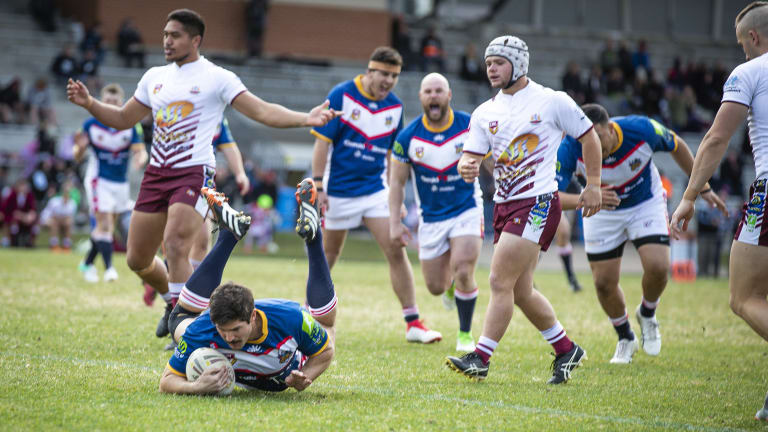 Until then it had been a tight affair, before Tuggeranong opened the floodgates with Nchouki scoring two tries in the final three minutes to complete a stunning second-half hat-trick.

He said it was also his team's best performance of the year, but he felt the final score didn't reflect how close a game it actually was.

"[Nchouki]'s a local junior so we got him back last year to play for the club and he did his knee halfway through, which was disappointing for him and he's been slowly getting more and more minutes," Giteau said.

"He's capable of doing that every week once he's fit. He's a very, very good player, a junior [Canberra] Raider. He's a character, mate, he's got plenty of lair in him."

The first half was a ding-dong affair with each team exchanging tries before Tuggeranong took a 14-12 advantage into half-time.

Nchouki's first started off the second half, before the Kangaroos returned fire with back-to-back tries to get themselves into the lead.

Then Tuggeranong centre Francis Toetu exploded through the Queanbeyan line after a scrum to run 75 metres and begin the Bushrangers' blitzkrieg. 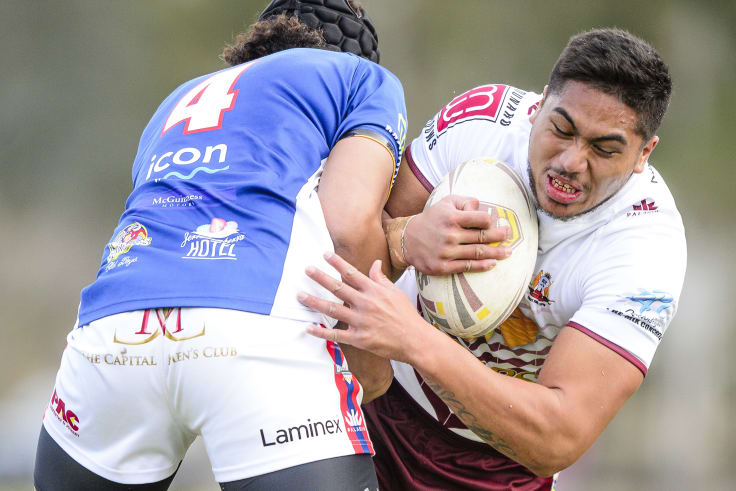 Kangaroos forward Nukurua Ngere (back) was one of several Queanbeyan players to get injured.

The Kangaroos' toll was much heavier than simply the loss, with Joshua Ayers dislocating his knee, Carson Barrett dislocating his shoulder and Nukurua Ngere hurting his back.

But Kangaroos coach Aaron Gorrell wasn't using that as an excuse and said they'd need to improve ahead of another big clash – against the Warriors at Freebody Oval next week.

"We were just poor. We had ourselves in the game and then just at crucial times came up with poor plays or wrong decisions," he said.

"We deserved everything we got. We'd work hard  and start to get on top and then we'd just come up with a soft option or a silly option."