Slovenian rider Matej Mohoric sprinted to victory in the 10th stage of the Giro d'Italia on Tuesday, while Britain's Simon Yates retained the pink jersey.

Bahrain-Merida rider Mohoric held off a strong challenge from German Nico Denz, who rides for AG2R La Mondiale, after the duo made a late break on 239-kilometre route from Penne to Gualdo Tadino, the longest stage of the race.

"I was not confident to beat Nico Denz. That's why I tried to attack him before," an elated Mohoric said after his gruelling ride. "When I saw that he was not passing, I gave it my all." 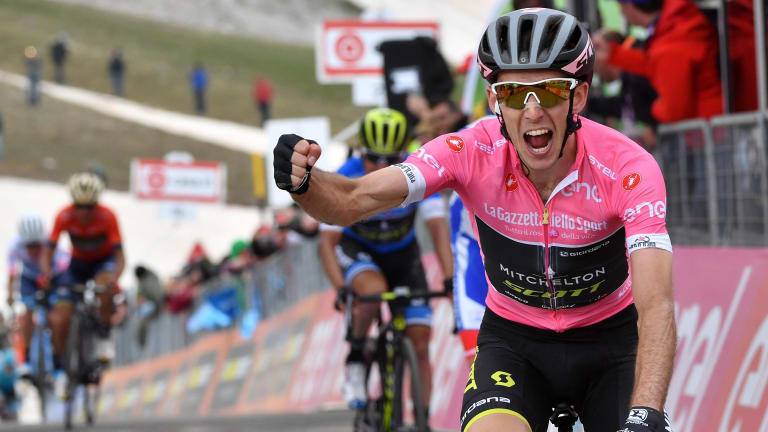 Yates extended his lead in the general classification over Dutchman Tom Dumoulin, the defending champion, to 41 seconds, with Frenchman Thibaut Pinot a further five seconds back in third place.

Yates' Mitchelton-Scott teammate Esteban Chaves started the day ahead of Dumoulin in second place overall, but was badly off the pace, with the Colombian losing time on the first climb and slipping down the leaderboard into 39th place.

"Chaves just had a bad moment on the first climb of the day. Straight after the rest day, you don't know how the body responds. I'm very disappointed for him because he's worked hard for this Giro," Yates said.

Yates took a bonus three seconds after winning an intermediate sprint earlier in the stage to strengthen his grip on the lead, and indicated he might have hit upon a strategy that might continue to pay dividends.

"I was going to go for the bonus sprint because I need to gain time on Tom Dumoulin but, when I saw Thibaut Pinot getting a lead out, I went past him," he added.

"I need as many seconds as I can get so maybe I need to go for more bonus seconds."