TORONTO — Canada’s two most populous cities, Montreal and Toronto, are separated by 335 miles and by language, culture and politics. But hockey has always pulled them together, except at playoff time.

The Canadiens and the Maple Leafs have met in 15 N.H.L. postseason series going back to 1918 and five times in the Stanley Cup finals, but not since 1979.

They’ll meet again Thursday in the opening round of the playoffs in Toronto, their first postseason series against each other in 42 years.

It’s a classic rivalry, but one that has been dormant, at least in the postseason, only to be remembered by those of a certain vintage.

Of course, geographic rivalries are special because they are rare in the playoffs. The Rangers and Islanders, for example, haven’t met in the playoffs since 1994.

“I’d say this rivalry reminds me more of the Yankees and Brooklyn Dodgers,” said Gord Stellick, who was an executive assistant with the Leafs in 1979 and later became the club’s general manager.

The Canadiens have won eight of the 15 series and hold a commanding 24-13 lead in Stanley Cup championships. But this year, they’ll be an underdog No. 4 seed against Toronto, the champion of the all-Canadian North Division.

Pandemic travel restrictions in Canada forced the N.H.L. to realign its 31 teams and form a division with all seven Canadian teams. Toronto went 7-2-1 against Montreal during the regular season, seemingly built in the image of the Flying Frenchmen of Montreal — with speed and skill led by Auston Matthews, the league’s top goal scorer.

Although American cities are ahead in easing restrictions and allowing fans inside hockey arenas — less than 5 percent of Canadians are fully vaccinated — the buildings in Canada will largely remain dark. The Canadiens announced Tuesday that they’ll be allowed to admit 2,500 fans, about 12 percent of the Bell Centre’s capacity, for any games after May 28 (Game 6 would be May 29, if necessary). It would be the first game in Canada with fans in attendance this season.

Nevertheless, the atmosphere will be muted for the two rabid fan bases, who were accustomed to flooding the streets adorned with face paint, flags and jerseys before the Leafs-Canadiens playoff games.

“You walked into Maple Leaf Gardens or the Forum in Montreal hours before the game and fans were out on the street and ready to go,” Lanny McDonald, a Hall of Famer who started his career with Toronto in 1973, said in an interview. “That’s the magic of a rivalry, especially when it’s playoff hockey.”

Darryl Sittler, one of the most popular players in Leafs history, added: “It’s a shame that in a series like this, fans in both cities can’t watch it live.”

The Hall of Fame goaltender Ken Dryden, who grew up in the Toronto area and won six Stanley Cups with Montreal in the 1970s, sees the rivalry as one of cities and of cultures.

Montreal is still known for its fashion and cuisine, flair and intimate quaintness, while diverse Toronto is known for its brashness, flashy skyline and economic clout. Both fan bases claim they live in hockey’s mecca. 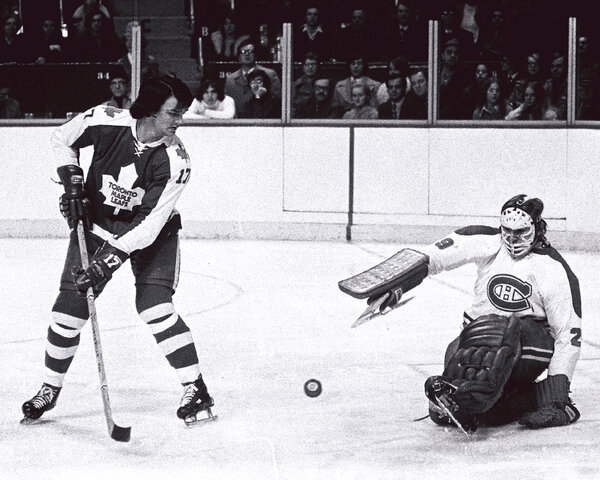 “Same fans, same degree of commitment, same kind of history, same love, same needs,” Dryden once said in a television interview. “If you liked one place you would like the other. There’s nothing like winning in one of these environments.”

But a championship has long eluded both franchises, since 1993 for Montreal. Toronto last won the Stanley Cup in 1967, when the underdog Leafs upset the Canadiens, taking the shine off Montreal’s growing global status.

“Montreal had the World’s Fair, Expo 67, that year and they were going to have the Stanley Cup parade there,” Stellick said. “They had the Montreal Expos. They had the Olympics in 1976. That was the place to be.”

The Canadiens-Leafs rivalry cooled after 1967 when the league expanded, adding six teams, and in the early 1970s, Boston supplanted Toronto as Montreal’s biggest rival.

“Toronto was a big draw, but for us the big rivalry was Boston,” Serge Savard, the Hall of Fame former Canadiens defenseman, said in an interview. “There were a lot of Boston fans in Montreal.”

Still, Toronto and Montreal had their battles in the 1970s, particularly in that last playoff meeting in 1979.

The Leafs were good, but diminished by the meddling of team owner Harold Ballard, who fired and rehired head coach Roger Neilson in a three-day soap opera leading up the postseason. “It was a pretty bizarre time,” Sittler said in an interview. “My job was to play hockey and you didn’t need those distractions.”

In contrast, the Canadiens had won three consecutive titles, their last great dynasty, having dispatched the Philadelphia Flyers in 1976 and the Bruins twice.

They had lost only 29 regular-season games in those three years, as the team was at what Scotty Bowman, the coach at the time, called its “peak.”

“It was such an exciting time,” Bowman said in a telephone interview. “The pressure was there, but it spurred the players to play at their best.”

A Montreal team featuring future Hall of Famers like Dryden, Savard, Guy Lafleur, Jacques Lemaire, Bob Gainey, Steve Shutt and Larry Robinson dispatched the Leafs in four games for the second year in a row on the way to a fourth straight title.

But Toronto didn’t go down without a fight, taking the final two games to overtime.

“The sad part was we thought we were close to the Canadiens,” McDonald said. “We had beaten the Islanders the year before. And even though the Habs had beaten us in four straight the year before in 1978, you think you’re only a player or two away.”

He added: “It reminded me of the Rangers-Islanders rivalry or Calgary-Edmonton years later,” said McDonald, who later played for Calgary. “At that time it was probably the best rivalry in hockey, especially because Montreal had won so many Cups, and Toronto was second.”

Since that series, Montreal won two more Cups, in 1986 and 1993, while Toronto has the longest active drought in the N.H.L. at 53 years, just one short of the gap the Rangers endured before winning it all in 1994.

In Montreal, expectations have fallen precipitously for Les Habitants, who squeezed into the postseason.

“Back in 1979, people in Montreal would have been disappointed if we didn’t win,” Savard recalled. “In those days, they didn’t ask before the season if we were going to make the playoffs. They were asking if we were going to win the Cup this year. A very different time.”

The history of the Leafs and Canadiens still resonates with today’s players.

“It’s the Leafs versus the Habs, so it’s everything you want in a playoff series,” Dermott said. “Even if you didn’t watch a game this season, the Leaf-Habs rivalry is always in the back of your mind. It’s going to be huge.”