Mitchell Moses failed to nail a sideline conversion and the miss ended a late, late Parramatta comeback in the Shire on Saturday night.

Cronulla appeared headed for an easy win when they led 22-4 with five minutes remaining. 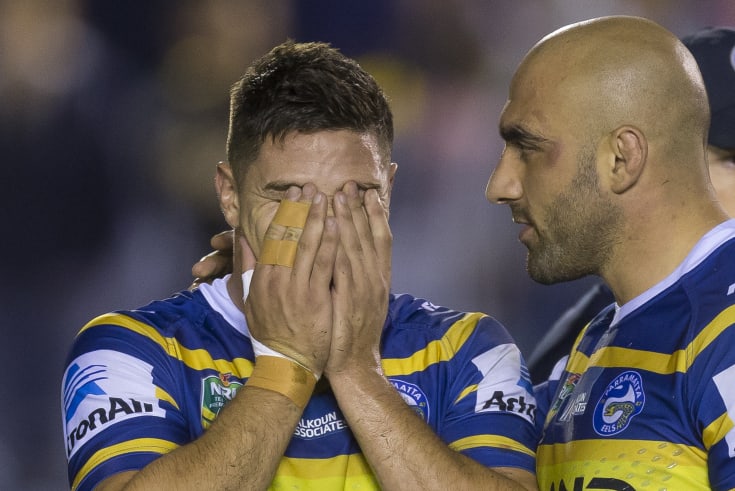 Close but no cigar: Tim Mannah consoles Mitchell Moses after his costly miss.

But tries to David Gower, Michael Jennings and Moses suddenly had the 12,073 fans worried the night was heading for extra time.

Moses celebrated his try in the right corner, but moments later it was a different story when he pushed his conversion across the face of the goals.

He put his hands on his head in disappointment as the Sharks players celebrated the 22-20 nail-biter.

Parramatta did well to put on a grandstand finish but they were second-best for most of the night.

Cronulla should never have allowed them to get so close.

Chad Townsend scored a try and set up another two as he again stood tallest for the home side.

A week after he slotted the winning field goal on the Gold Coast, Townsend looked comfortable   again as he called the shots with so many of the club's big-guns out of action.

The latest to break down was Wade Graham, who disappeared up the tunnel approaching the half hour on Saturday night with another hamstring injury.

As long as their unheralded halfback stays fit, however, Cronulla are in good hands.

The Sharks made it three wins on the trot to move up to seventh place on the ladder.

And the news will only get better with inspirational leader Paul Gallen expected back from a knee injury next week for the tough road trip to Canberra.

The Eels were flat and disappointing until the dying minutes. They had such high hopes coming to the Shire as they themselves chased  third straight win against a team without Luke Lewis, Gallen and Josh Dugan.

They remain anchored at the bottom of the NRL ladder and meet western Sydney rivals Canterbury on Friday in what could be an early edition of the Spoon Bowl.

Cronulla were awarded a couple of penalties in the opening minutes and were able to capitalise through Sosaia Feki in the fourth minute.

The Eels did well to hit back when they spread the ball like lightning to the left for Bevan French to dive over.

The Eels' big three – Moses, Corey Norman and Gutherson – all touched the ball in the lead-up before Brad Takairangi's brilliant hands delivered the final pass for French.

Townsend shaped to kick before he threw a cut-out pass for Ricky Leutele, who put Feki over for a first-half double.

And a few minutes later the 27-year-old Townsend popped up in support of Valentine Holmes to crash over next to the posts for the home side led 16-4 at the break.

Townsend wasn't finished with the Eels, and his vision to race over to the short side an create an overlap for Edrick Lee to score the fourth try all but kick-started the Shire celebrations  more than half an hour out from full-time.

Nothing seemed to be going right for the visitors as Tim Mannah was forced off for a head injury assessment after a head clash with Feki. He was passed fit and returned.