Sharks five-eighth Matt Moylan has backed former Panthers teammate Nathan Cleary to   lead  Brad Fittler's NSW revolution in the No.7 jersey over the next decade.

Moylan expected Cleary to handle his State Of Origin debut on Wednesday night and sat back in quiet admiration as the young 20-year-old stood up to the rigours of representative football in NSW's 22-12 win over the Maroons. 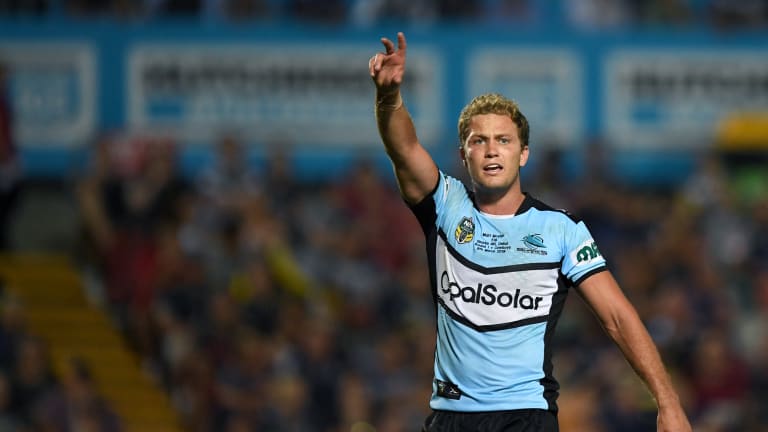 High point: Sharks five-eighth Matt Moylan was in awe of the manner in which former Penrith teammate Nathan Cleary handled his Origin debut.

The ex-Panther also would not have been surprised on Friday night as a cool-headed Clearly slotted the match-winning Panthers field goal  to down a gutsy Canberra Raiders just 48 hours after his Origin debut.

Most of Moylan's focus this week has been on steering Cronulla back to the winner's circle against the Wests Tigers on Sunday at Southern Cross Group Stadium, but the classy fullback-turned-half has allowed himself a few moments to appreciate once more the talents of Cleary. And he has no doubt his Origin career will be a long one.

"He's been progressing really well as a player, been improving as much as he can and he works really hard on his game, so I see no reason why it wouldn't be," Moylan said.

"He handled it really well. It definitely didn't surprise me the temperament he's got and the way he goes about his business. He's a professional and he's definitely a talented player.

"He's pretty mature for his age. He's been like that since he made his debut. He was always pretty measured with everything that he does, and it's a credit to him to see how far he's come in just a short time."

Moylan was playing  fullback in round 13 of 2016 when Cleary made his debut and struck up a halves combination with the youngster in the second half of last year.

His off-season switch to Cronulla sent James Maloney to the foot of the mountains, and the veteran playmaker has developed arguably the best halves combination in the NRL alongside Cleary.

Moylan said Cleary's on-field composure helped the players around him find another level. "He was good for me while I was there. He was taking a lot of the control and I was able to play footy off the back of that," Moylan said. "He's good at getting a side around the field and knowing what's needed and at what time. His maturity and his composure is beyond his years." Moylan helped Cronulla down Penrith in round seven while Cleary was on the sidelines with a knee injury.

That win kick-started a six-match winning run for the Sharks that  was ended by the rampaging Rabbitohs last weekend.

A win over the Tigers would continue Cronulla's surge towards a spot in the top four, but Moylan was wary of the visitors, who only narrowly fell short of a comeback win over the Sydney Roosters last weekend.

"They've been good at keeping sides in a tight game, and they've been able to grind out some good wins and take their opportunities where they can," Moylan said.