In all of the State of Origin scuttlebutt Matt Moylan hasn't rated a mention. He is a man too early into his new surrounds and too far removed from his old brilliance to truly be considered for Brad Fittler's fast-moving halves carousel.

Moylan, who played all three games of the 2016 series, knows that. But he's still here, he still wants to play Origin and he thinks he can do it this year. 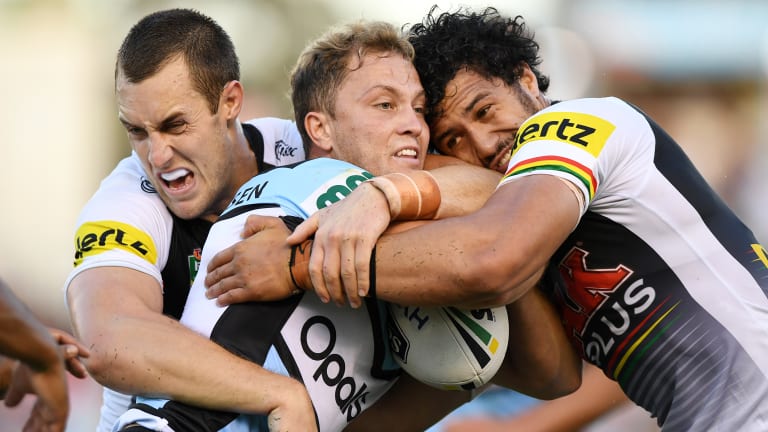 "[But] I just think that I can play better," Moylan shrugs. "I'm just worried about performing [at the Sharks] and if that does come then I will be over the moon. But in saying that I think I can play better.

"It's still a goal of mine this year – I still want to play [for NSW] – but I just want to make sure I'm playing good consistent footy before I get that opportunity."

His name in the pecking order has seemingly fallen below those who haven't worn sky blue, nor really been close to it: Luke Brooks, Mitchell Moses, Luke Keary, Blake Green, Cody Walker – not to mention the annual frenzied big-body push to have a back-rower wear No.6.

Still, Moylan works quietly away with a team that has won three straight games, boasting a personal points decision over James Maloney in the process.

He knows Fittler. Fittler knows him. And the Blues coach would be well aware Moylan is his own harshest marker.

"I've got a good relationship with [Fittler] and I see him around at games," Moylan said. "I haven't spoken to him for a while, but [Origin] doesn't come up in conversation. Probably most of the pressure comes from myself just wanting to play well and put my best foot forward for the side.

"I felt comfortable straight away [at Cronulla] but I just wasn't playing consistent footy and the type of footy I want to be playing. Sometimes it takes time but I've just got to keep working hard and see how it goes from there."

Given his own injury battles earlier this season Moylan's wait to notch a first win for the Sharks and spurt since has been invaluable for coach Shane Flanagan. Co-captains Paul Gallen and Wade Graham have been absentees, Luke Lewis has spent more time outside the lines than inside them and Josh Dugan is banged up.

On top of that, an unlikely leader, Moylan's childhood mate and stand-in skipper Andrew Fifita, has emerged.

"He's always still going to be loud and vocal, it's always the way with Andrew. He loves a joke. A lot is still the same but he's probably taken on more of a leadership role and is a lot more mature in that role as well."

Gallen remains in huge doubt for the Sharks' trip to the nation's capital to take on an in-form Raiders, who are riding their own mini-winning sequence.

Cronulla are expected to give the NRL's oldest player every chance to prove his fitness, desperate for some experience to be lent to their forward pack.

"So far so good," Flanagan said on Friday. "He just needs to improve right up to the game. He's done everything so far."