Tariq Sims points to the spot where his mother Jackie used to stand on the sideline at the training field behind WIN Stadium.

More than a decade ago, Tariq and his younger brother Korbin were running around in the Illawarra Steelers' junior rep teams. 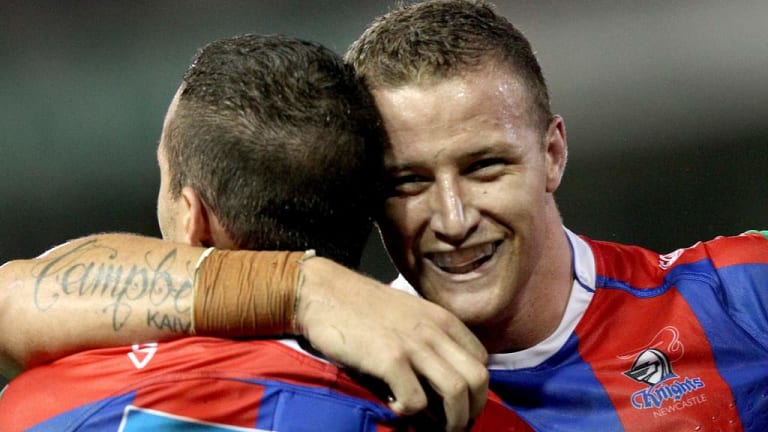 Brotherly love: Korbin Sims has opted to join his brother at the Dragons.

"We were only 14 or 15, we couldn't drive, so mum used to sit on the other side of that demountable, watching us train and constantly critiquing what we can and can’t do and what we should and shouldn’t be doing,'' Sims said.

Tariq never dared bark back at his mum for fear of ''being flattened''.

Now the brothers are set to be re-united after Korbin inked a three-year deal with St George Illawarra from next season, following two seasons with the Brisbane Broncos.

The pair have grown up and developed into top-class forwards while their mother is still happy to offer free advice.

Still buzzing after his Origin debut a week ago, Sims, 28, was surprised and excited about his 26-year-old brother ditching Red Hill for the Red V.

He only learned about the news when he arrived for training and had not bothered to refresh the family messages on WhatsApp.

Another brother, Ashton, 33, played in the NRL before he joined the Toronto Wolfpack.

Tariq and Korbin barely spoke during the Origin series because of the latter's allegiance to the Maroons. As Tariq says, ''it remains a sore point''. But he is thrilled to be linking up with his younger brother at the Dragons.

"It is a pretty special moment. I am obviously very excited to get Korbin back down here playing some good football,'' Sims said. 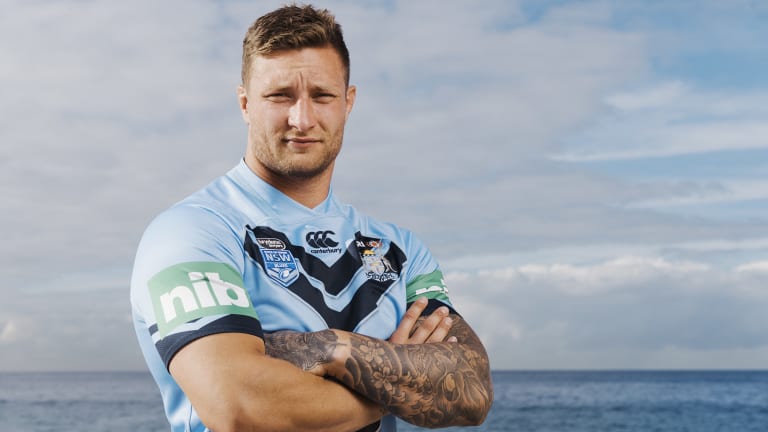 Debutant: Tariq made his NSW bow in game three earlier this month.

"He knows better than anyone that his spot in the team is not guaranteed here.

"There are a lot of people who have been toiling away for a long time and have been playing some good football. Because of where we are on the ladder and everyone is firing at the right time, a lot of people are playing in ISP [reserve grade] waiting for their shot.

"He has got his work cut out, but I am sure he will get down to business when he gets here.

"We don’t really talk too much about that sort of stuff. Obviously we talk being family, but as far as where he was with his decision and what he wanted to do, that was all up to him.

"I said to him 'I’d love to have you here' and explained what we are building towards and what sort of direction we are going in, but ultimately the decision was up to him.

"He's growing into a front-rower and brings a lot of aggression and obviously he can ball play a bit.''

Sims is backing up after his first Origin game – he was also 18th man for the Blues' first two games of the series – and could not wait to finish the season strongly.

He returns to where it all began in first grade when the Dragons travel to Townsville for Saturday's clash against North Queensland. 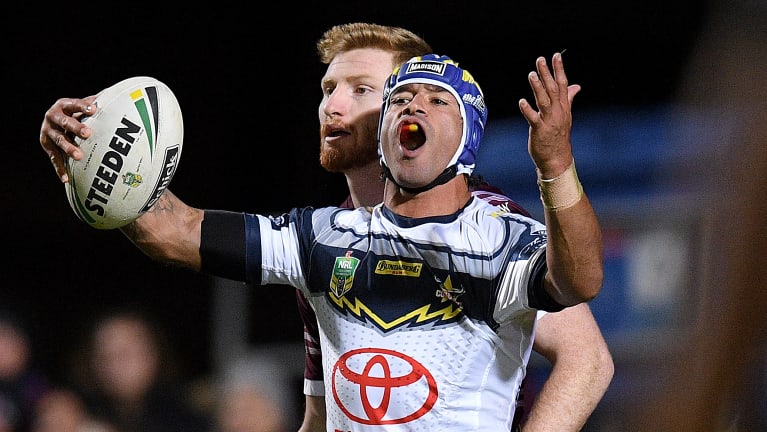 Showdown: Tariq is looking forward to a clash with former teammate Thurston.

"It's a very special ground for me and to be going up against 'Jono' [Johnathan Thurston] at the old stomping ground is going to be something special,'' he said.

"I am really excited leading into this back seven games, it is exciting as a club and on a personal level.

"We want to win every game, we want to win them convincingly, we want to put as many runs on the board as we can and it starts this weekend against the Cowboys because we have had back-to-back losses now and we want to bounce back.

"We will be desperate going up there, we are under no illusions.

"The Cowboys are a desperate side and being JT’s last year, it's just another incentive for them because it is another one of their last home games, and they will want to make sure the crowd is turning out for JT and the boys are playing for him.

“We have got to make sure we go up there with our heads down and our bums up and work hard.''